Ketanji Brown Jackson has an impeccable resume. Could the first Black female nominee have been anything less than perfect?

I vacillate between bemusement and outrage about the criticism levied against Ketanji Brown Jackson, President Joe Biden’s pick to replace retiring Justice Stephen Breyer for the Supreme Court.

Let’s start with what made me chuckle: Sen. Lindsey Graham’s snipe at Jackson for being too elitist. “The Harvard-Yale train to the Supreme Court continues to run unabated,” sniffed Graham about Jackson’s double Harvard degrees from the college and law school.

And this is what really steamed me up: Fox News host Tucker Carlson’s ridiculous demand that Biden release Jackson’s LSAT score. “Wonder how she did on the LSATs? Why won’t [Biden] tell us that?,” ranted Carlson on his show. “That would settle the question conclusively as to whether she is a once-in-a-generational legal talent, the next Learned Hand.” For extra credit, Carlson added that Biden was trying to “humiliate and degrade” the U.S. by the nomination and turning the country into “Rwanda.”

To her critics, Jackson is either an entrenched member of the Ivy League establishment or a dangerous impostor who could transform America into an impoverished African nation. It’s head-spinning.

What’s not up for debate is that Jackson has a formidable resume—one that checks all the boxes for a Supreme Court appointment.

A former Justice Breyer clerk, she’s now a judge on the U.S. Court of Appeals for the D.C. Circuit. Before that she was a federal district court judge in Washington for eight years. She’s also a former public defender and vice chair of the U.S. Sentencing Commission. 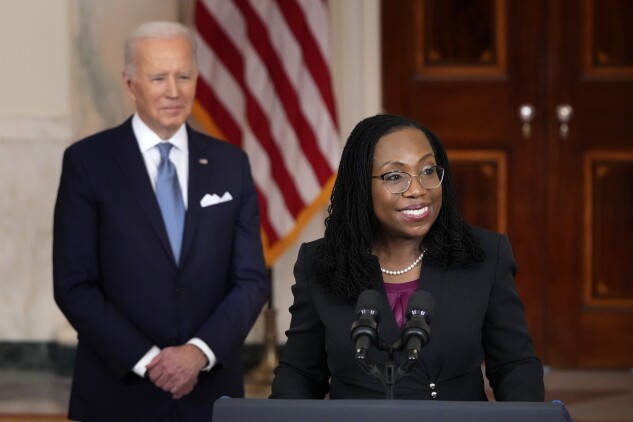 Ketanji Brown Jackson at the White House after President Joe Biden nominated her to the Supreme Court.
Drew Angerer/Getty Images

Jackson has a drop-dead awesome resume. Could the first Black female candidate for the Supreme Court have been anything less than perfect?

Imagine, if you can, a Black Amy Coney Barrett—a graduate of a respectable though lower profile law school (Notre Dame) with scant judicial or practice experience.

Until Donald Trump nominated her to the 7th Circuit Court of Appeals in 2017, Barrett, a former Justice Antonin Scalia clerk, had spent virtually her entire career in academia as a law professor at Notre Dame. Though she did work at litigation boutique Miller Cassidy Larroca & Lewin (which later merged with Baker Botts) for two years, it was noteworthy, according to SCOTUSblog that she could “recall only a few of the cases on which she worked, and she indicated that she never argued any appeals while in private practice.”

I am not casting aspersions at Notre Dame Law School nor do I doubt that Barrett is smart and qualified. Still I wonder how Jackson would have been greeted if she didn’t have all the bells and whistles of a tippy top law school and ample judicial experience on her resume. I think her detractors would have a field day.

A more humble C.V. would have been cited as prima facie proof that Biden was passing over more qualified candidates for a “lesser black woman,” as libertarian Ilya Shapiro had warned when Biden announced his intention to put a Black woman on the high court.

I know it’s a cliché to say that a Black woman aiming for a top position in a credential obsessed profession like law must be far more qualified than her White counterpart. But isn’t it still true?

I posed that question to Harvard Law professor Noah Feldman who gave me some historical context. “This is an era when we expect that the nominee would have [Brown Jackson’s] kind of resume,” says Feldman, noting how the standard for getting on the Supreme Court has become more exacting over the decades. “The Supreme Court tends towards those with elite education and government service.”

He adds that recent appointees like Brett Kavanaugh and Neil Gorsuch had comparable resumes to Brown Jackson’s. Though he says it’s “rare” for a graduate of Notre Dame to be on the court, he stresses that Barrett is no slouch. “She was part of an elite core with a very strong academic reputation.” That said, he adds, “certainly no one can look at [Jackson’s] record and say with a straight face that she’s anything but wildly qualified for the Supreme Court.”

Precisely the point: Jackson is “wildly qualified”—and that’s her power.

Of course, her “perfect” resume won’t stop the racism-laden darts, such as the one thrown by Carlson. “We’ve all been called to present our LSAT scores at some point,” says NYU School of Law professor Melissa Murray about the drill Black lawyers go through in their careers. “Amy Coney Barrett did not have the same credentials [as Jackson] but she was celebrated for not being Ivy League because it made her relatable.”

That privilege, however, is not open to Black women, despite Sen. Graham’s lament that Jackson’s credentials are somehow too hoity-toity. “For years we’ve been told that for Black women to be considered for positions in the upper echelons, they’d have to be twice as good,” says Murray. “Now people like Graham are saying we’d prefer that you graduated from Trump University Law School. That’s hilarious!”

The unfair criticisms will continue but Jackson’s unassailable resume will make them less likely to stick. “Racism is injected in the process,” says Angela Onwuachi-Willig, the dean of Boston University School of Law. “But Biden was brilliant in picking a candidate who’s perfect because it highlights the racism behind some of the critiques. I don’t want to say that Biden had to pick [Brown Jackson] but she has excelled at everything she’s done in her life.”

Short of a hot scandal, it’s hard to imagine that Jackson won’t be confirmed. “She is a candidate genetically engineered for this position,” says Murray. “It’s almost like she was developed in a lab for this moment.”