A group of Starbucks Corp. workers at a shop in Mesa, Ariz., petitioned the National Labor Relations Board to hold a union election.
Photographer: Stephen Chernin/Getty Images

has released more details about the makeup of its U.S. workforce and will link executive compensation to diversity targets -- the latest S&P 100 company to beef up its efforts to ensure minorities have better representation.

The Seattle-based company is providing a breakdown of its workers in the U.S. by race on its . It also includes links to the coffee chain’s EEO-1 reports -- federal forms on the diversity of its workforce that companies are required to file to the federal government, but don’t have to release to the public. 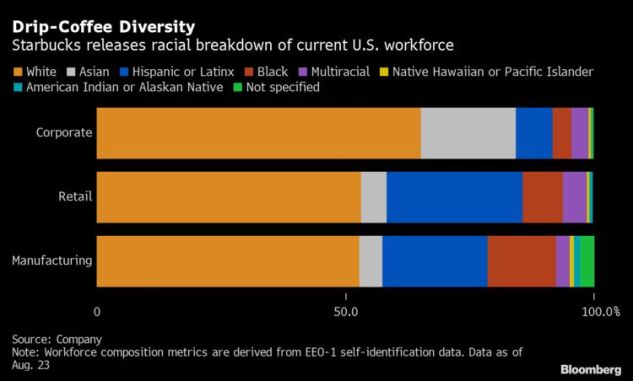 Following the death of George Floyd and a surge of protests for greater racial equality in the U.S. this year, some companies are pledging to release greater data to the public and take measures to fix workforces that often are much more White and male than the general population.

By underrepresented Black and other minority groups are in their workplaces, the companies are inviting investors, customers and workers to monitor their progress and hold them accountable to make improvements.

To contact the reporter on this story:
in Chicago at jroeder@bloomberg.net