Welcome back to the Big Law Business column on the changing legal marketplace written by me, Roy Strom. This week, we look at the history of the term “Cravath scale.” Sign up to receive this column in your inbox on Thursday mornings.

It’s Masters Week. That means it’s time to get in touch with the elevated sense of pageantry and decorum that emanates from Augusta National Golf Club. The place is so revered, even its cheese sandwiches are famous.

The club is perhaps the most prestigious in the country. And The Masters tournament it has held since 1934 has come to be known as “a tradition unlike any other,” the phrase Jim Nantz first coined in 1986 and that since has been trademarked.

So it’s fitting that Big Law is in the midst of its own prestige-fueled tradition: competing to pay young lawyers more money than anybody else.

Like past Masters champions gathering for a Tuesday dinner at Augusta, the Big Law salary-setting tradition comes with its own rituals developed over decades. The new-money announcements historically came after Cravath, Swaine & Moore partners met for a Monday lunch in November.

The whole system even has its own name: The Cravath Scale.

I like tradition and ceremony as much as the next guy. And don’t mistake any of this as a critique of the Masters. Tiger’s win in 2019 may have been the last time the world experienced true joy.

But lately I wonder if it’s time for a Big Law brand refresh. Why does Cravath continue to get credit for setting the pace on salaries?

It’s been nearly five years since the firm last broke new ground for associate salaries. That’s when the firm raised first-year salaries to $180,000.

Two years later, Milbank took the industry to $190,000. An overeager associate at the time reportedly referred to the firm as “The new f----- Cravath.” (Is that the Big Law equivalent of putting on the Green Jacket?) More recently, Davis Polk has been more likely to up the ante on new bonuses. 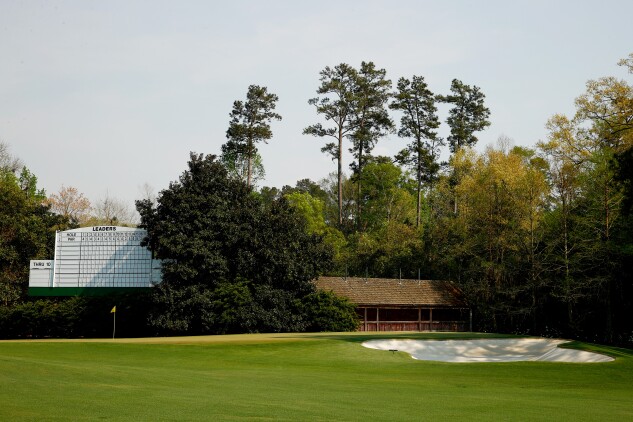 A general view of the 11th green during a practice round prior to the Masters at Augusta National Golf Club on April 07, 2021 in Augusta, Georgia.
Photo by Jared C. Tilton/Getty Images

Despite all this, Cravath is still widely cited as a pacesetter in conversations and media reports about Big Law compensation.

The deference is nothing new.

There was a time when Cravath was the “crème de la crème,” to borrow a term from Duane Krohnke, who wrote that his $9,000 salary as a Cravath associate in 1965 was the top among his peers.

The New York Times in 1986 called the Cravath “perhaps the most prestigious law firm in the country” when it raised starting salaries to $65,000. Later in the same article, it’s noted that Cravath had already been outdone on a $10,000 clerkship bonus—one that it created—by Davis Polk, which extended the payment to a wider swathe of candidates.

A 1987 New York Law Journal article noted the industry was awaiting what “trend-setter” Cravath would do with salaries. Readers who put the paper down after hearing of the Cravath curiosity would have missed the reveal later in the article that Fried Frank had already raised the starting salary bar to $68,000 from $65,000.

The respect Cravath has been given stems from an earlier time, of course. It developed the “Cravath System” of paying associates and partners based on their seniority. Today, that system is known by a more general term: “lock-step.”

Aric Press, the former editor in chief of The American Lawyer, said he had heard a story, perhaps apocryphal, that the “Cravath going rate” meant that associates who weren’t being paid at their firm what Cravath paid its lawyers would leave to join Cravath. That was at a time when Cravath was perceived as the market leader.

“The brand continues to have distinction and continues to be synonymous with high quality and exclusivity,” Press said. “It no longer dominates the legal market the way it did, if it ever did.”

I have a few theories as to why the “Cravath scale” lives on.

First, it’s become industry shorthand. Well-known terms make life easier. It’s like referring to Tiger as the GOAT (greatest of all time). We all know what I’m saying.

Second, who is complaining? Some Big Law leaders may have an actionable claim—particularly those who have actually set the pace in salaries and bonuses lately. But they can’t come out against the Cravath term. This whole “debate” is petty and beneath them!

And the rest of the firms are pleased to brag that their pay scale matches that of Cravath, the industry’s well-worn touchstone for prestige. It would be like if your local municipal golf course was able to say: “We’ve got Augusta greens.”

Third, blame Google. We live in a time where publishers are rewarded for indulging lazy shorthand—I mean, search terms that attract eyeballs. “Cravath scale” has been searched on Google nearly 10 times more than “Davis Polk bonus” over the past year, according to Google Trends. That’s despite Davis Polk setting the pace for two new rounds of Big Law bonuses during that span. 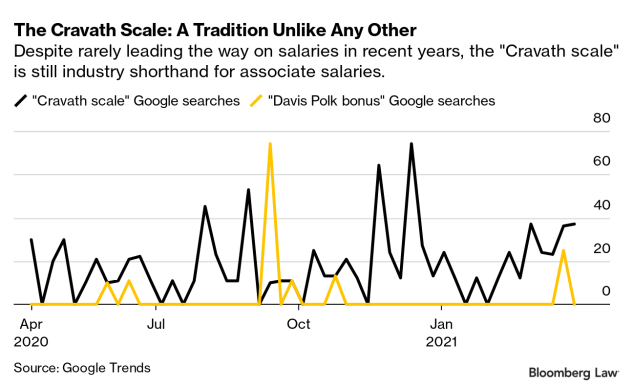 The top result from searching “Cravath scale” will take you to a historical table of Big Law salaries compiled by Joshua Holt at Biglaw Investor.

Holt said he has wrestled with the question of what defines the Big Law salary scale, and he has gravitated toward the traditional answer: whatever Cravath pays its lawyers.

He has a deceptively simple reason why.

Who needs a spoilsport? In the spirit of Masters Week, let the tradition carry on.

On M&A: The first quarter was the best start to the year for global dealmaking since at least 1998, according to data compiled by Bloomberg. Wachtell, Kirkland, Cravath, and Skadden all topped $100 billion in deal value, Meghan Tribe reports.

On Bankruptcy: Large bankruptcies remained at elevated levels in the first quarter, with 45 firms with at least $50 million of liabilities seeking court protection. That’s the most in a first quarter since 2010, excluding Q1 of 2020, when the emergence of Covid-19 roiled the global economy. Big Law firms that moved to hire bankruptcy and restructuring laterals over the past year are positioned to benefit.

On Kirkland & Ellis: The world’s largest firm by revenue has been bolstering its connection with the industry it rode to the top: private equity. The firm has placed nine lawyers in in-house private equity positions during the first quarter of 2021, with most leaving for legal chief roles, Brian Baxter reports.