The US Supreme Court in Washington, D.C.
Photographer: Stefani Reynolds/Bloomberg

The US Supreme Court is turning its anti-regulatory campaign toward the federal agencies that are scrutinizing Wall Street banks and seeking to break up , taking up cases that could defang two powerful market regulators.

The justices on Monday will consider whether those facing complaints from the or the can go straight to federal court with constitutional challenges to their cases. Most lower courts have said those challenges must wait for an in-house process that can take years -- and arguably give the agency an unfair advantage.

A ruling against the government could undercut two of the most potent federal regulators. The SEC filed more than 700 enforcement actions in the last fiscal year and won judgments and orders worth $6.4 billion, including from investment banks. The FTC, which is also investigating , returned $2.4 billion to consumers last year.

Such a ruling would extend a line of Supreme Court decisions that are chipping away at the federal administrative state. In June, the court and its 6-3 conservative majority the ’s climate change authority, curbing the ability of agencies across the government to tackle issues that carry major political or economic ramifications. 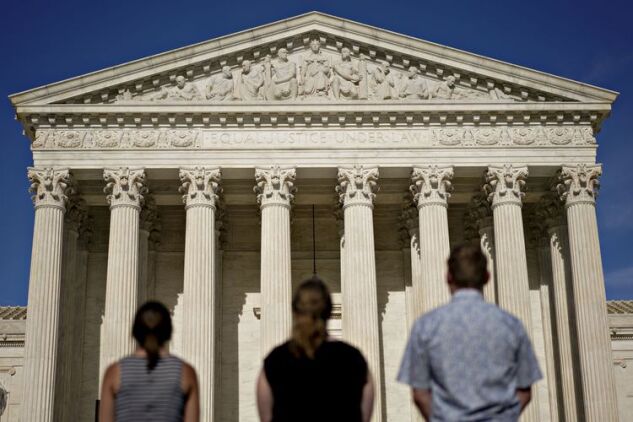 People stand outside the US Supreme Court building in Washington, DC, where the justices will hear arguments Monday in cases that may curb the reach of the SEC and FTC.
Photographer: Andrew Harrer/Bloomberg

“The power of agencies to make rules, their enforcement powers and their power to adjudicate are all potentially subject to narrowing by this court,” said , a securities law scholar and professor at the University of Pennsylvania Law School.

The latest cases center on lawyerly issues that could have big practical effects. The key question is whether federal district courts have jurisdiction to consider a broadside against the agencies’ system of using in-house administrative law judges, known as ALJs, to handle many of their cases.

The challengers -- accountant Michelle Cochran in the SEC case and body-camera manufacturer Axon Enterprises Inc. in the FTC case -- say the system violates the Constitution because the job protections afforded to ALJs insulate them too much from presidential control. Cochran and Axon point to a 2010 Supreme Court ruling that similar protections for members of the Public Company Accounting Oversight Board.

The administration says Cochran and Axon can make those arguments -- but only after they go through each commission’s proceedings and challenge its final decision in a federal appeals court. In Cochran’s case, that means finishing an SEC battle that started in 2016, when the commission first accused her of engaging in improper professional conduct.

“It’s actually insane,” said Margaret Little, senior litigation counsel at the New Civil Liberties Alliance and one of Cochran’s attorneys. “It makes no sense whatsoever to put people through years of protracted proceedings that are destined to be set aside because of their unconstitutionality.”

But US Solicitor General , the administration’s top Supreme Court lawyer, says that’s what Congress required when it passed the agencies’ respective governing statutes. In court papers, she argued that Cochran and Axon are trying to “short-circuit” the system lawmakers established and “would subvert congressional policy choices.”

Axon is battling the FTC’s effort to unwind the company’s acquisition of a rival. In addition to challenging the tenure protections for the commission’s lone ALJ, the company seeks to challenge the process by which the FTC and the Justice Department decide which agency will review a deal. Unlike the FTC, DOJ litigates only in federal court.

A Supreme Court defeat for the commissions could reduce their use of ALJs -- something that already started to happen at the SEC after a 2018 Supreme Court found constitutional problems with the way the judges were appointed. Critics say fewer in-house proceedings would be a good thing, given the home-field advantage the agencies enjoy.

“The ultimate goal is to get agency enforcement out of their in-house courts, which rule for them 100% of the time and back into federal courts, where people have their constitutional protections,” Little said.

The Biden administration disputes the characterization of in-house courts as one-sided tribunals, saying studies show the agencies lose a significant percentage of those cases.

But , a lawyer with Kirkland & Ellis, said the FTC rarely loses in its own court, in comparison to the DOJ, which has had persuading courts in a number of recent cases.

“If you are looking at the disparity between what happens when the agencies go to federal court versus when the FTC takes it internally, you see a bit of a disconnect,” said Dorsey, who worked at both the FTC and DOJ during the Trump administration.

The Axon case “could really open up the possibility of other types of challenges to FTC authority,” said , a professor at Howard University Law School. The FTC recently began an online-privacy rulemaking that has already come from business groups as exceeding the agency’s power.

“It’s not a good moment in light of the direction of this Supreme Court on administrative law to be flexing your authority to the max,” Gavil said.

The Supreme Court last year the FTC’s ability to seek monetary awards, a tool it had used for decades to force companies to reimburse consumers for fraud or other illegal conduct. Congress has struggled over a fix amid criticism by Republicans and business groups of the agency’s direction under Biden’s progressive chair, .

The SEC is already operating under the shadow of the Supreme Court’s EPA decision, which could bolster anticipated legal challenges to the agency’s proposal to require publicly-traded companies to disclose the climate risks they face. And a federal appeals court in May the SEC’s in-house proceedings violated a hedge-fund manager’s constitutional right to a jury trial.

The Supreme Court’s display of unease with how administrative agencies function has “empowered companies and individuals to challenge agency action on a wide array of bases,” said Harold Krent, a professor at the Chicago-Kent College of Law at the Illinois Institute of Technology. Cases in the pipeline could “change the legal landscape incredibly,” he said.

“The conservative majority thinks a smaller government is a better government,” said , a securities-law defense attorney at Seward & Kissel LLP in New York. “They’re not going to rely on ‘experts’ at these agencies anymore.”