Andrew Pantazi was reporting on the rapid spread of the coronavirus in Florida earlier this month when he was forced to take an unpaid week off. He’ll do the same in May and June.

As the pandemic-fueled recession wreaks havoc on the news industry, the 28-year-old reporter at the Florida Times-Union in Jacksonville is one of hundreds who have been furloughed, taken pay cuts or let go outright.

The journalists are being forced to the sidelines during one of the biggest stories of their careers, unable to serve readers hungry for information. While the pandemic is driving record readership at websites, it has crippled advertisers -- and the publishers who count on their spending. 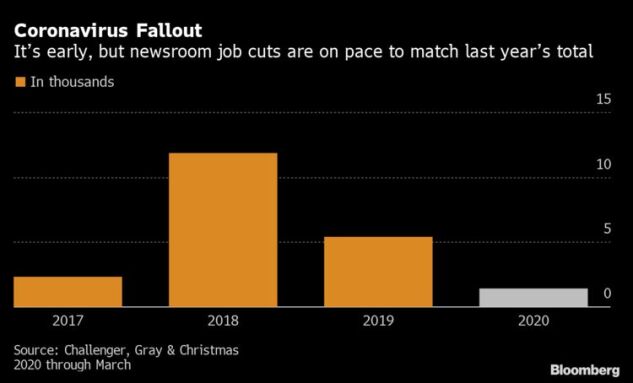 Smaller papers have been , but the crisis is hurting big outlets as well. The New York Times and News Corp., the publisher of the Wall Street Journal, have both lost advertisers -- even if readers are more engaged. And the Los Angeles Times, serving the second-largest media market, is furloughing employees on the paper’s business side and cutting pay for some managers.

“To see a big news story happening, and I can’t take part in it because of the furlough, is a really challenging thing to get over,” Pantazi said.

Due to the economic fallout, Times-Union employees are taking 15 days off unpaid over the next three months. Parent -- the largest publisher in the country, with over 100 newspapers -- is requiring leaves for every employee making over $38,000.

That’s forced Pantazi to set aside a data project charting the rise of coronavirus cases in Florida. Under the leave policy, he’s barred from responding to any work messages and can’t stay in touch with sources.

Dozens of U.S. news outlets are in the same position, crippled by the loss of ad spending. Through March, the industry lost about 1,400 jobs this year, according to Challenger, Gray & Christmas Inc., an outplacement and executive-coaching firm. Some benefactors have stepped forward -- including , which pledged $100 million to assist news outlets struggling with the pandemic -- but it’s hard to tell how much it will help journalists keep their jobs. 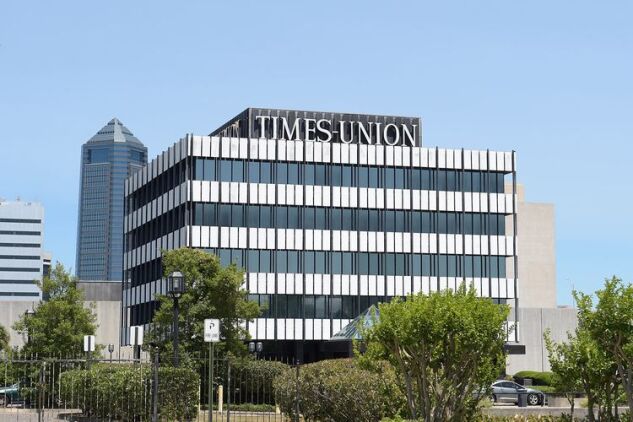 “You’ve had whole categories of advertisers just exit the market immediately,” said , president of the , an industry trade group that represents newspapers. “The contraction of the ad market means they’re looking at furloughs and layoffs just when people need reporters the most.”

Many of the reporters forced to stop working were covering the pandemic -- transferred from beats like sports, business or government. Earlier this month, the Cleveland Plain Dealer, owned by , laid off 22 journalists, including its health reporter.

Katherine Burgess, 27, was pulled off her regular beat covering county government for the Gannett-owned Commercial Appeal in Memphis to help on the coronavirus. She had been working on stories about outbreaks at nursing homes and local testing for the virus when she was forced to take a furlough this week.

“I think I’m going to be OK financially, though I realize that’s not the case for everyone,” said Burgess, who also covered religion and the suburbs. “What’s harder is realizing I won’t be able to be there for my community during a global pandemic.”

During the furloughs, the Commercial Appeal will be working with about 25% less staff, Burgess said. “That’s going to mean fewer stories,” she said.

To avoid further cuts, the news industry has asked Congress that the next stimulus package set aside $5 billion to $10 billion for the federal government to buy advertising in local news outlets.

The spending could raise awareness about health resources or government benefits, while also helping to stem cuts in newsrooms.

In the meantime, journalists are trying to look out for one another, like offering small interest-free loans to those who need help.

Paige Cornwell, a reporter at the , created a GoFundMe page for journalists who have been furloughed, laid off or had their hours cut. As of Monday morning, she had raised $54,000 and fielded statements of need from 190 journalists.

Most have sought $200 to $300 to help with expenses like rent, bills and groceries, she said. At least two have contracted the coronavirus and are worried about medical bills, she said.

While Cornwell has been impressed by the response, she’s concerned that some people have donated to the fund instead of subscribing to a newspaper.

“They are concerned their money will go to the large companies who are responsible for the layoffs and furloughs,” she said. “I’ve tried to stress that subscribing is even more important during this time.”

To contact the reporter on this story:
in New York at gsmith233@bloomberg.net