A major law firm’s recent request for a payment that would equate to more than $18,000 per hour in legal fees highlights a vexing question for lawyers, their clients, and courts: Should attorneys be paid based on the amount of time they work, or on the result they achieve?

Quinn Emanuel Urquhart & Sullivan is seeking a nearly $185 million fee for representing a group of health insurers who will be paid about $3.7 billion from the U.S. government, reimbursing them for never-made payments promised under Obamacare. The Supreme Court ruled the insurers were owed the money in April.

The request could trigger a challenge from some of the insurers or litigation funders, which purchased insurers’ legal claims at a discount when the litigation looked nearly hopeless. Either way, a judge will be forced to weigh competing views of how lawyers should be compensated for big-money class-action cases.

“That’s the judge’s job, to determine if it’s a bargain or a rip-off,” said Geoffrey Miller, a New York University Law School professor whose research on contingent fees is often cited by federal judges. “Ultimately, the judge will decide based on his or her instinct.”

Quinn Emanuel’s class action lawsuits were on hold for years while a separate case over “risk corridor” payments wound its way to the Supreme Court, leaving the law firm’s time sheets are relatively barren for a fee request so large. The firm’s lawyers worked nearly 10,000 hours, meaning their average hourly rate could be around $18,500 if granted the full award.

But the fee request could be considered a bargain by a different measure. When viewed as a percentage of the total $3.7 billion award, the firm’s lawyers want to keep 5% of the judgment. That figure has been exceeded in a number of notable securities fraud and antitrust settlements, including those involving Enron Corp., Tyco International plc, and Visa Inc.

Swedlow, who did not return a request for comment, had developed a legal theory to pursue those payments, and Health Republic Insurance became in February 2016 the first insurer to seek a refund through a lawsuit. The insurer initially agreed to a 25% contingent fee with its Quinn Emanuel lawyers, court records show.

Quinn Emanuel and Swedlow discussed the case with other health insurance executives and some balked at what they thought was an expensive fee request, Swedlow said in a court filing last week. As the firm signed clients up for a rare opt-in class-action, they made an up-front promise to request no more than 5% of the total award for their fee. 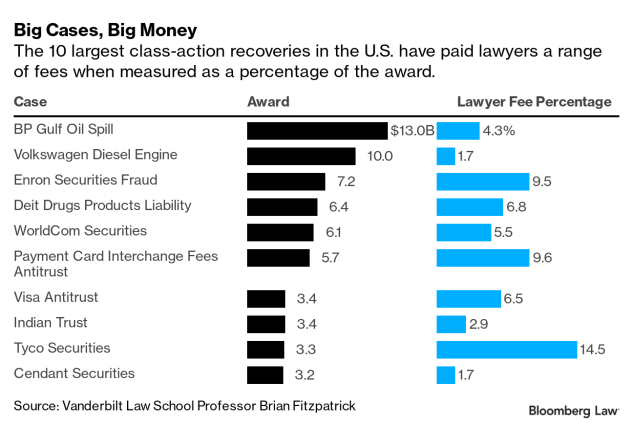 As Quinn Emanuel’s client list grew, other insurers pursued individual lawsuits against the government. One that advanced more quickly than the class actions was filed on behalf of Illinois-based insurer Land of Lincoln Mutual, which was ordered into liquidation in 2016 after the government stopped reimbursement plans.

Land of Lincoln, represented by lawyers from Barnes & Thornburg and Massey & Gail, was granted Supreme Court review in June last year. Paul Clement, the former U.S. Solicitor General and partner at Kirkland & Ellis, argued the case before the court, which sided in the insurers’ favor in April.

Quinn Emanuel’s class actions were put on hold in mid-2017 pending the results of that case, but the firm submitted briefs to the Supreme Court arguing on behalf of the insurers.

One group interested in the litigation that did not appear on court dockets were litigation funders like Juris Capital, which purchased in 2017 Land of Lincoln’s $75 million claim for nearly $29 million. Risk corridor cases became one of the largest investment areas for litigation funders in recent years.

Under terms of the proposed sale to Juris Capital, documented in the bankrupt insurer’s court proceedings, the funder’s payment could grow to more than $68 million, or 2.25 times its investment, depending on the size of the award Land of Lincoln received and when it was paid.

Land of Lincoln received a final court judgment last month for more than $90 million, and the same amount was paid by the Centers for Medicare & Medicaid Services on July 20, according to the U.S. Treasury’s judgment fund. The award and its timing, coming after more than 545 days since the sale, appear to have met the threshold for the roughly $68 million payment to Juris Capital. Litigation funders commonly use the duration of a case as a way to determine their return.

Land of Lincoln’s claim is separate from the Quinn Emanuel litigation. Though it is likely some of the parties in the class-action sold their claims to financiers, creating the potential for disputes between funders and the law firm, since the lawyers’ fee is taken out of the award. Parties can dispute the fee request by Aug. 27.

“They’re concerned about anybody taking anything out of their pot of money,” said one litigation finance executive who declined to be named discussing the industry’s views of the matter. The executive also noted that the size of the award and success of the case may make funders less interested in fighting over the matter.

Quinn Emanuel argues that its fee request is reasonable. It’s cited the case’s success obtaining every cent the insurers sought, the firm’s work developing the legal theory behind the cases, and the insurers’ agreement to a fee in the 5% range.

Still, the firm’s hourly fee means it is receiving a bonus, known in contingency fee cases as a lodestar multiplier, of 18 to 19 times its normal billable hour rate.

Miller, the NYU professor who studies contingent fees, said the “majority view” among U.S. judges is to favor the percentage fee calculation. It’s easier to calculate, and it aligns incentives between lawyers and clients, he said. But judges often turn to empirical research which shows that percentage-based awards decline as the value of settlements rises, Miller said.

“Judges, intuitively, are making this kind of ratio adjustment,” he said.

Miller said Quinn Emanuel’s 5% request was “reasonable,” but noted that a multiplier of 18 was “extraordinarily large.”

That dynamic is somewhat common in cases with huge awards, Miller said, and makes it hard to handicap how a judge will view Quinn Emanuel’s fee request. One factor working in Quinn Emanuel’s favor is that the insurers chose to be part of the class and knew the fee could be as high as 5%, Miller said.

Herbert Kritzer, a law professor at the University of Minnesota Law School, said the court’s role in deciding class-action lawyer fees is to protect unsophisticated clients from lawyers requesting runaway payments. He said insurers who entered the agreement with Quinn Emanuel, and the financiers who purchased their claims, “arguably” don’t need the court’s protection.