Chauvin kneeled on Floyd’s neck for 9 minutes and 29 seconds, which was “totally unnecessary,” Minneapolis Police Department Lt. Richard Zimmerman said Friday when being questioned by Frank.

“Holding him down to the ground face down and putting your knee on the neck for that amount of time is just uncalled for,” said Zimmerman, a homicide investigator called to the scene. “I saw no reason why the officers felt they were in danger.”

Frank’s questioning of Zimmerman came as the state mounted its case against Chauvin’s use of force against Floyd, a central theme throughout the murder trial. The prosecution has used police officers and even paramedics and a firefighter to argue Chauvin violated department standards for using force when detaining Floyd.

Retired Sgt. David Pleoger, who was Chauvin’s shift supervisor at the time, testified Thursday that officers should have eased up on Floyd once he was restrained and provided necessary medical attention. Prosecutors said they also plan to call Minneapolis Police Chief Medaria Arradondo.

Minnesota Attorney General Keith Ellison built a high-powered legal team to prosecute Chauvin, which includes a former top Obama administration lawyer and a former prosecutor who closed one of the state’s most infamous criminal cases. But before Ellison brought in those lawyers from the private sector, he tapped Frank, a longtime government lawyer to join the prosecution.

“You will please take notice that the State of Minnesota will be represented by Assistant Attorney General Matthew Frank,” Ellison wrote in a June court filing. 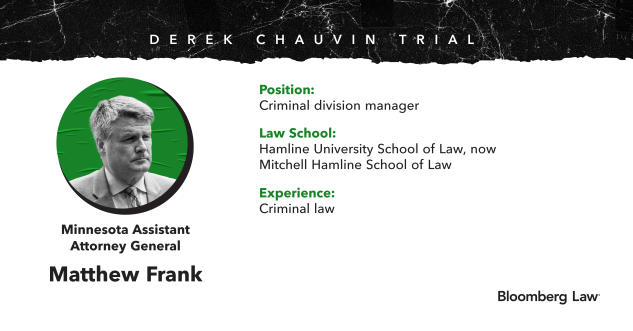 Frank has remained relatively anonymous despite traveling the state to head up murder cases and other major criminal prosecutions, often in small rural counties without the resources or experienced lawyers to handle them on their own.

The Chauvin trial seems guaranteed to change that. Whether he is remembered more like Vincent Bugliosi, the prosecutor who put Charles Manson behind bars, or Marcia Clark, the prosecutor who came up short in O.J. Simpson’s murder trial, likely depends on the outcome of the case.

Frank has worked in the Minnesota Attorney General’s Office for 21 years, managing the office’s criminal division for the past 14. He previously served as a public defender and an assistant county attorney.

‘That Could Kill Them’

Prosecutors this past week attempted to poke holes in the possibility that Chauvin pressing his knee on Floyd’s neck was warranted while the defense took issue with witness expertise and potential police threat at the site of Floyd’s arrest.

Frank’s most notable exchange was with Zimmerman, who received ongoing training on use of force in police tactics. Zimmerman broke down how use of force is applied. He said Chauvin’s decision to kneel on Floyd’s neck was a use of deadly force.

“If your knee is on a person’s neck, that could kill them,” he said.

Zimmerman’s sentiments echo those of fellow law enforcement officers, paramedics, and other state employees called to the stand in Chauvin’s murder trial.

“When Mr. Floyd was no longer offering up any resistance to the officers, they could have ended their restraint,” Pleoger said. 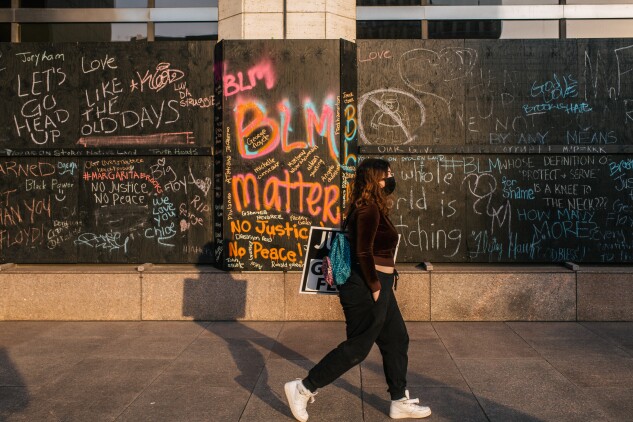 A pedestrian walks past a boarded up building across from the Hennepin County Government Center in Minneapolis today.
Photographer: Brandon Bell/Getty Images

Frank in the Past Year

In the past year alone, Frank has closed out a handful of notable murder cases.

He helped Carlton County, population 36,000, by prosecuting James Montano for shooting his uncle and cousin after lying in wait on his father’s property. A jury convicted Montano for first-degree murder and attempted first-degree murder, which put him in prison for the rest of his life without the chance for release.

Frank assisted Todd County, population 25,000, with the case of Dylan Bennett who was accused of murdering his father and mother at their home. Bennett’s case had been scheduled for trial, but he later pleaded guilty to the slayings and received two life sentences.

For Dodge County, population 21,000, Frank led the case against Lois Riess, who murdered her husband in 2018 and then killed another person while on the run in Florida. She pleaded guilty to the Florida killing, was extradited to Minnesota, and admitted to murdering her husband.