The outcome of the so-called copyright lawsuit of the decade—a protracted showdown between Oracle America Inc. and Google Inc. involving a claimed $9 billion in damages—has touched off uncertainties that could change software-writing practices.

Oracle’s court victory has cast doubts about a common legal defense—the fair use doctrine—in copyright lawsuits. Software developers are accustomed to a decades-old practice of copying others’ program lines to ensure software and devices can work together. Since the decision, they are grappling with the possibility of facing more lawsuits and fewer defenses.

The outcome, tech industry officials say, will drive programmers to look at ways to reduce possible copyright liability, including using more open-source software programs that are available to anyone.

The U.S. Court of Appeals for the Federal Circuit shocked software developers and copyright lawyers after it tossed a trial court jury’s decision that had found Google’s copying of Oracle’s program lines in developing its Android mobile operating system was a justified fair use. Google is weighing its appeal options, a spokesman told Bloomberg Law.

Silicon Valley tech giants and startup software developers closely followed the case because it centered on the practice of copying a particular kind of software program element, a convention that many deem a standard industry practice.

Many software programs use bits of other developers’ code, also called application programming interfaces, or APIs, so that products from other companies can function with each other—say, a laptop and a printer from different manufacturers. Limiting that practice could make companies more hesitant and think twice about developing new products that involve APIs, industry officials say.

“Not only are we worried about the increased risk of litigation resulting from it, the mere threat of litigation can chill innovation,” Mika Devi Shah, legal counsel for Mozilla Corp., which filed an amicus brief in the case supporting Google, told Bloomberg Law in a statement.

Oracle sued Google, a unit of Alphabet Inc., in 2010 for copying its Java programming language APIs for developing Android. Google, and much of the software community, argued that Java APIs that were copied weren’t protectable in the first place.

The Federal Circuit sided with Oracle in 2014 when it first heard the case, holding that APIs could be protected. It then sent the case back to trial, and a jury ruled that the copying was fair use.

The same court, hearing the case on appeal, ruled March 27 that the jury was wrong and copying the code was not fair use. It then sent the case back to the trial court to determine Oracle’s compensation. Oracle has estimated its damages at $9 billion. 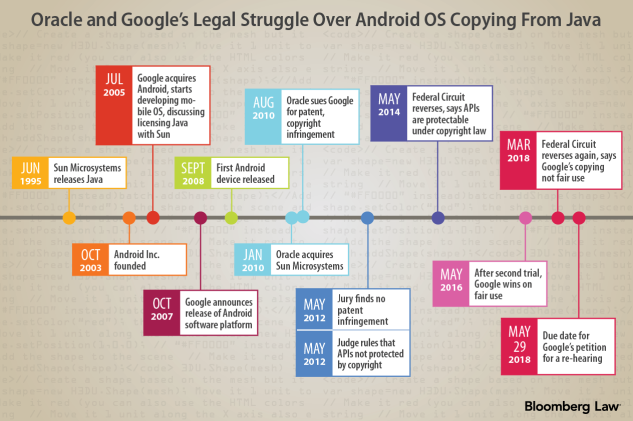 The March ruling was also notable because it is the only instance in which a jury’s fair use verdict in favor of a defendant was reversed on appeal, said Pamela Samuelson, a copyright law professor at the University of California, Berkeley, who’s looked at more than 300 similar copyright cases.

The fair use doctrine is software developers’ common legal defense in using others’ work. And the Federal Circuit has effectively “knocked out” their defenses to copyright infringement claims, according to Samuelson, who filed a friend-of-the-court brief supporting Google’s position in the case.

“What I’m worried about more than anything is the implication of the opinions for how fair use will be viewed in future software cases,” Samuelson said.

Striking down the jury’s verdict on fair use after an expensive eight-year trial could drive software developers to find ways to avoid copyright lawsuits that may involve the fair use defense, including settling early, Joshua Bloch, a computer science professor at Carnegie Mellon University, told Bloomberg Law.

“It used to be up to the jury to decide if it was fair use, and it’s not anymore,” said Bloch, who was one of dozens of computer scientists who filed a brief supporting Google. “The assumption would be we can’t win, so we’ll either settle or stop selling our product, and that is why the potential harm is huge.”

To ward off litigation, companies and developers are increasingly using open source code, Bloch said. Open-source software is generally available for public use without a fee. And developers wishing to use other companies’ APIs—but wishing to avoid Google’s fate—may develop their own, seek out a license or scour more diligently for other open-source substitutes, if any.

Meanwhile, copyright lawyers also advise companies and developers that they should examine the origins of software code used in their products and services to ensure they’re not facing a legal risk from something they may have copied.

“The question for most companies is ‘Are they sure that every single piece they’ve added in they have the rights to use?’ It’s kind of like a Mr. Potato Head. What parts have we added?” Daniel Castro, vice president of the Information Technology and Innovation Foundation, told Bloomberg Law.

The fact that the case landed at the Federal Circuit—which specializes in patent cases—also concerns software developers, copyright lawyers said.

The court only ended up with the case because Oracle had originally accused Google of both patent and copyright infringement. The patent claims didn’t survive the journey, but the case remained with the court.

“If you want to sue someone for copying your API, you want to make sure it ends up in the Federal, not the Ninth Circuit, so you’re probably going to find some patent claim to attach,” Bergmayer said.

Oracle’s win could also drive more software companies to sue competitors for copyright infringement to try to block or slow their product development, Evan Engstrom, CEO of Engine, a startup advocacy group that filed a brief supporting Google in the case, said. “If you have competing apps, you could troll your competitor,” he said.

Others downplayed the brouhaha over the Federal Circuit’s ruling. A fair use argument depends heavily on the facts specific to each case. If anything, Oracle’s win would be a boon for smaller software developers who will be better able to protect their APIs against infringement by larger companies, said Keith Kupferschmid, president and CEO of the Copyright Alliance, whose members include Oracle. Kupferschmid’s group filed an amicus brief in the case supporting Oracle.

Google now faces a slew of legal decisions, including a deadline at the end of May to challenge the result through a rehearing. The Federal Circuit granted Google’s request to extend the deadline from April 26.

Alternatively, Google may petition the U.S. Supreme Court directly to review the appeals court’s ruling. The high court declined to hear the case in 2014.

“We are disappointed the court reversed the jury finding that Java is open and free for everyone,” Google spokesman Patrick Lenihan told Bloomberg Law. “This type of ruling will make apps and online services more expensive for users.”

An Oracle spokeswoman did not immediately respond to a Bloomberg Law request for comment.

The fact that the Federal Circuit’s decision to overturn the jury’s decision is highly unusual could help Google on appeal, Jonathan Band, a Washington-based copyright lawyer, told Bloomberg Law. Band represents the Computer and Communications Industry Association, an international tech group whose members include Google. The CCIA filed a brief in the case supporting Google.

But Google’s legal pathway ahead could stretch for years.

“They’re all long shots, once you lose at an appellate level, it’s not good,” Bergmayer said.

Silicon Valley is bracing for a drawn-out period of uncertainties as Google pursues finality on its case. The winds of caution that the legal battle has stirred among tech companies could irrevocably alter their software-creation fundamentals.