An aerial view shows The Forum arena in Inglewood, Calif., on May 9, 2019.
Photo by Daniel Slim/AFP via Getty Images

Winsberg, who has spent nearly the past nine years in-house for the Angels, is poised to become the new chief legal officer for the Inglewood Basketball and Entertainment Center and The Forum, an iconic Los Angeles arena. Chris Wallace, a Clippers spokesman, confirmed Winsberg’s new role.

Winsberg departs as the Angels were sued this week by the family of late pitcher Tyler Skaggs, who died of an opioid overdose in 2019. Winsberg didn’t respond to a request for comment about his decision to leave the Angels, where he was general counsel and head of legal and risk management.

Angels Baseball LP—an entity controlled by Arturo “Arte” Moreno, who has owned the Angels since 2003—posted a job listing earlier this month for a new general counsel. That listing has since been removed.

Angels spokesman Adam Chodzko told Bloomberg Law in an email that the team has hired an outside law firm to handle its legal needs until it finds a permanent replacement for Winsberg.

Chodzko declined to name that firm or confirm whether another lawyer, associate legal counsel Jennifer Tedmori, remains with the Angels. Tedmori didn’t respond to a request for comment. 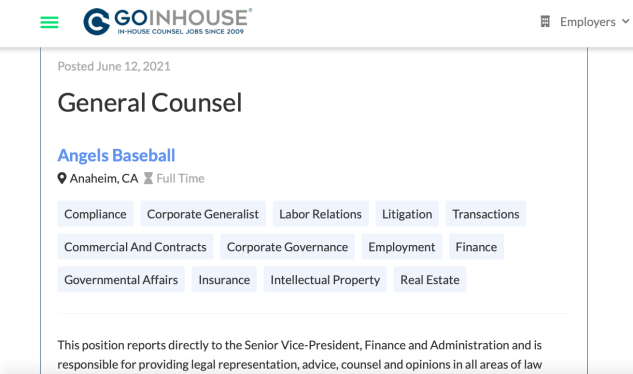 Skaggs’ family has also sued two former public relations executives for the Angels, whom they claim either provided opiates to Skaggs or covered up such transactions. The Angels, who play their home games in Anaheim, Calif., and both former employees have denied those allegations.

In May, the Angels terminated pitching coach Mickey Callaway following the completion of an MLB investigation into his interactions with several women. The league also banned Callaway from the sport until 2023. Callaway’s conduct in part led the New York Mets—which Callaway managed from 2018 to 2019—to part ways last week with their longtime in-house legal chief and head of human resources.

Both the Clippers and Angels also employ lawyers in roles outside their respective law departments. The Angels hired former Ropes & Gray associate Nicholas Spar in 2019 as an assistant for baseball operations, while attorney Matthew Elijah has been a manager of strategic planning for the Clippers since 2017.

The Clippers themselves are no stranger to legal entanglements involving players and personnel. The team’s 2014 sale to Ballmer, the wealthiest owner in the National Basketball Association, was the subject of litigation. The Clippers were also sued in December by a man claiming to have orchestrated their recruitment of star player Kawhi Leonard. The NBA is reportedly investigating the matter.

Ballmer finalized a $400 million deal last year to buy The Forum, a popular concert venue that used to be home to the NBA’s Los Angeles Lakers, from Madison Square Garden Co. That agreement ended a long legal battle between Ballmer and fellow billionaire James Dolan, chairman and CEO of MSG, which sought to block a rival Ballmer arena project threatening The Forum’s future.

CAPSS LLC, a company formed by Ballmer to acquire The Forum, was advised by Munger, Tolles & Olson on its purchase of the live music site in Inglewood. John Spiegel, a Los Angeles-based litigation partner at Munger Tolles and father of Snap Inc. co-founder and CEO Evan Spiegel, took the lead for the law firm in brokering a peace between Ballmer and Dolan.

The deal will see Ballmer keep The Forum as a concert venue but build an 18,500-seat arena for the Clippers, who currently share a home court with the Lakers at the Staples Center in Los Angeles. The new Clippers arena, IBEC, is set to open in 2024 and will be part of a larger urban development project backed by Ballmer and E. Stanley Kroenke, owner of the National Football League’s Los Angeles Rams.

Duckett, a vice president and general counsel for the Clippers, confirmed in an email to Bloomberg Law that she remains the top lawyer for the team and its minor league affiliate, the Agua Caliente Clippers in Ontario, Calif. Lauren Brock, an associate at Beverly Hills, Calif.-based Donaldson + Callif, recently hired by the Clippers as a counsel for business and legal affairs, will report to Duckett, she said.

Brock takes over a role previously held by Isis Freeman, a former Paul, Weiss, Rifkind, Wharton & Garrison associate who left the Clippers in December for a job at Netflix Inc. The rest of Duckett’s in-house group includes basketball legal coordinator and associate Marcus Banks Jr., who joined the Clippers in 2016 after working for the NBA, MSG, United Talent Agency, and Freshfields Bruckhaus Deringer.