Untangling trillions of dollars worth of loans and other financial contracts from is a complex, expensive and time-consuming job.

So, finance giants are turning to artificial intelligence to simplify and speed up a task mandated by regulators -- and spare human lawyers some serious drudgery.

Morgan Stanley figures it’s saved legal staffers 50,000 hours of work and $10 million in attorney fees by using robot Libor lawyers instead of only the human kind. Goldman Sachs Group Inc. says computer algorithms sped things up “drastically.” These banks aren’t alone in , and the revolution likely won’t stop with the Libor transition -- but the number of contracts involved in this shift provides an ideal testing ground for the machines.

The task would be grueling for paralegals, whose torture involves parsing dense clauses to sort out which govern in a post-Libor world. Does this paragraph decide how to replace the rate, or do these? They’d sweat floating-rate options, applicable periodic rates and substitute basis to sort out the new interest payment, and grapple with whether the legalese applies just to bonds or to loans and swaps as well.

Then repeat all that grunt work over millions of pages.

“We had a client that had 15 million queries and they were able to get all that answered within a quarter,” said , chief executive officer at Eigen Technologies Ltd., which helped Goldman Sachs and ING Groep NV deploy Libor-analyzing software. “The alternative would have been literally an army of lawyers and paralegals over a year, or maybe two.”

This is all happening because a decade ago major banks were caught rigging Libor (full name: the London interbank offered rate). As a consequence, the benchmark is being switched off throughout the global financial system. Newly issued loans and other products cannot be tied to the rate after Dec. 31, and it will be retired for dollar-based legacy products after June 2023.

So here come the bots. But even with AI, examining old legal documents to figure out how they change when Libor is swapped out for another interest-rate benchmark is costly. Major global banks are each spending at least this year on the job, according to Ernst & Young. And humans still need to check their work and make final decisions; once banks discover which contracts need to be renegotiated, they must sit down and haggle with their counterparty.

“A person has to look at the documents and come up with a strategy,” said , a partner at law firm Friedman Kaplan Seiler & Adelman LLP, who views AI as an enhancement rather than a threat. “It probably makes a lot of paralegals and lawyers happy that they don’t have to waste time.”

The experience is reshaping broader attitudes toward large-scale administrative tasks, pushing other cumbersome jobs to AI. JPMorgan Chase & Co. has asked its Libor robots to expand their remit and grapple with other hard tasks in the company’s corporate and investment bank, a spokesman said.

Of course, a broader industry shift to more AI could mean for humans in certain areas.

Libor is keeping the bots plenty busy, though. Morgan Stanley’s software digested 2.5 million references to Libor, according to , a managing director at the bank. The algorithm -- based on neural-network models and known as Sherlock -- rifles through contracts, digging out clauses that identify how a collateralized loan obligation or a mortgage-backed security will transition to replacement rates. 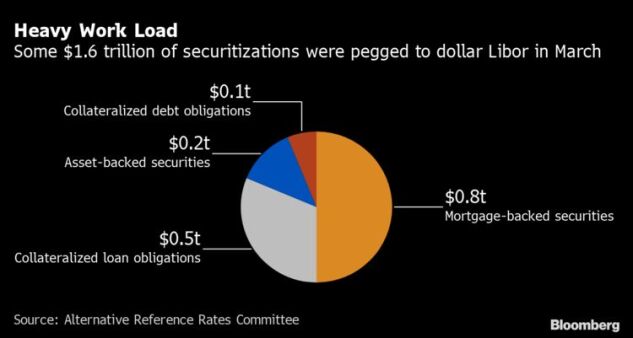 It categorizes them so Morgan Stanley can determine how their value will change depending on the replacement rate. That helps the bank decide whether to keep or sell the asset. The software operates “in a fraction of human processing time to assess the impact of potential rate-change scenarios,” Avery said in an interview.

ING used AI to decide whether more than 1.4 million pages of loan agreements needed revision, said Rick Hoekman, a leader in the bank’s wholesale banking lending team. “It was a big success” that eliminated a lot of manual work, he said. The company’s data scientists may eventually use the software to approve the credit of clients.

That’s not to say that everyone is piling in. NatWest Markets Plc was approached a couple years ago by consultancies offering AI, but turned them down. “We sensed it would involve a huge project to get it to work and would consume lots of time when we just wanted to crack on,” said Phil Lloyd, head of customer sales delivery. “We felt it might help but it wouldn’t be a nirvana.”

Plenty of other banks and asset managers have struggled with such software and are instead hiring offshore lawyers and paralegals to do the work after seeing the large amount of training and technology required.

But there’s likely no stopping AI from spreading throughout banking.

Bank of New York Mellon Corp. is working with Google Cloud to help market participants predict billions of dollars of U.S. Treasury trades that fail to settle each day, and with software company Evisort Inc. to manage contract negotiations.

“When your 12-year-old and my 12-year-old are our age, they’re not going to do finance the way we do -- you can see their impatience with technology,” said , chief investment officer at BNY Mellon and the former head of the Libor transition at Goldman Sachs. “You’re not going to beat them, so you’ve got to join them.”

To contact the reporter on this story:
in London at wshaw20@bloomberg.net

To contact the editors responsible for this story:
at kaquino1@bloomberg.net