“If the telecom industry is under pressure, media is even more so,” said Fede Membrillera, head of corporate finance at boutique advisory firm Delta Partners on the sidelines of MWC Barcelona, the telecom industry’s biggest gathering, this week. “Despite some question marks around ability to deliver on the promise, we expect to see transactions where telecom companies acquire or merge with media groups.”

AT&T completed its $85 billion purchase of Time Warner last year, adding a media empire that includes TBS, the Warner Bros. studios and hit shows including “Game of Thrones.” The deal was an attempt to diversify its business and stem the loss of pay-TV subscribers to newer rivals such as Netflix Inc.

Venture capital funds are also stepping up their activity as companies in the tech, media and telecom space make strategic bets on startups, said John Harrison, EY’s head of media and entertainment.

“It will be a continuation of a busy period for media M&A, but we may not see much from a mega deals perspective,” Harrison said. “Companies are looking at acquiring talent and technologies as they make a push to be bigger.”

M&A wasn’t the only thing dealmakers were talking about at MWC.

In Europe, smaller companies are focused on sharing infrastructure with their peers as they prepare for the roll out of “fifth generation” networks, promising ultra high speeds and low latency, and the costs that will entail, according to Wilhelm Schulz, chairman of mergers and acquisitions in Europe, the Middle East and Africa at Citigroup Inc.

Vodafone Group Plc teamed up with Telecom Italia SpA recently to study ways to collaborate on building out the new network technology in Italy and last month announced a plan to boost its tower-sharing deal in the U.K. with Telefonica SA.

Telefonica CEO Jose Maria Alvarez-Pallete told Bloomberg TV on Feb. 25 he is open to more alliances that “would make economic and rational sense.’’

“We don’t see cross-border transactions in telecom in the short term even though the European market is far more fragmented than that in the U.S., and there is no duplication so antitrust concerns are lower,” Schulz said. “But investors are short-term focused and don’t want companies to pay premiums for deals that are not immediately synergistic.“ 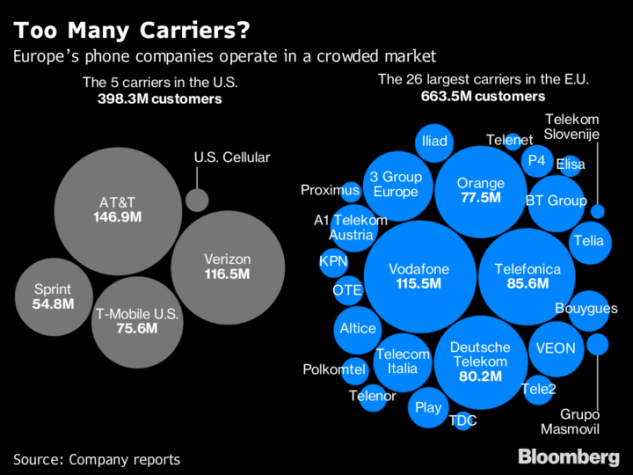 Still, companies in the sector, especially those with high debt levels, have found one way to raise cash.

“Telecom operators are focused on extracting value for their infrastructure and tower assets by partnering with private capital, as well as sharing infrastructure costs with their peers,” said Pieter-Jan Bouten, partner at advisory firm Greenhill & Co. He expects more tower and fiber activity this year as “telecom infrastructure as a new asset class attracts a lower cost of capital and a more long-term approach, so operators are able to get value recognition for their network assets way above where they are trading.”

Altice Europe NV has been selling stakes in its infrastructure as a way to pay down debt and share the cost of network buildouts. The company may ask for formal bids for its Portuguese fiber network as soon as March and is seeking a value of about 5 billion euros or more for the business, people familiar with the matter said this week. Altice sold a similar stake in its French fiber-to-the-home venture last year as well as stakes in its mobile towers in France and Portugal.

Vodafone is also weighing selling a minority stake in its tower portfolio, which is Europe’s largest.

With assistance from Stefan Nicola

To contact the reporter on this story: Ruth David in London at rdavid9@bloomberg.net

To contact the editors responsible for this story: Daniel Hauck at dhauck1@bloomberg.net Amy Thomson, Michael Hytha