Crucial data from experimental vaccines against the new coronavirus started streaming in as disclosed early results and new findings from the University of Oxford’s rival shot were reported to be imminent.

Moderna’s vaccine elicited antibodies in all people tested in an initial safety trial, federal researchers said Tuesday. Early results from tests of a vaccine Oxford is developing with will be published as soon as Thursday, according to a report on the ITV.com website.

New immunizations are reaching important milestones as the virus surges in the U.S. and other countries, continuing to stifle economies and claim lives. Governments are investing billions of dollars in the hope that safe and effective inoculations will aid a return to something resembling pre-pandemic life.

Investors are also eagerly following the vaccine race, although some drugmakers have said they’ll sell their products at cost during the pandemic. Moderna’s shares surged as much as 18% in U.S. trading despite a high rate of side effects among the 45 patients who got the shot, with three experiencing severe reactions.

While ITV.com referred to the Oxford results as “promising,” without providing any data, AstraZeneca shares climbed as much as 4.2% on the report. Other companies researching vaccines for the virus -- including Pfizer Inc. and Merck & Co. -- , and optimism over Moderna lifted global equity markets.

“The good news is that this vaccine induced antibodies,” said , director of the . “Not just any kind of antibodies, but neutralizing antibodies.”

Fauci, in a telephone interview, called the Moderna data “really quite promising.” Other experts sounded a note of caution over side effects.

More than half of participants who got the middle of three doses administered in the Moderna trial suffered mild to moderate fatigue, chills, headache and muscle pain. Also, 40% of people in the middle-dose group experienced a fever after the second vaccination. Three of 14 patients given the highest dose experienced severe side effects, but that dose is not being used in larger tests.

“Man, that is a lot of adverse events,” said Tony Moody, a doctor and researcher at the Duke Human Vaccine Institute. He said it would be “unusual” for a vaccine to have this rate of side effects.

On the plus side, Moody said that the antibody levels produced were “really encouraging.” The neutralizing antibody levels in the trial produced were equivalent to the upper half of what’s seen in patients who get infected with the virus and recover, according to the results published Tuesday in the New England Journal of Medicine.

Moderna’s stock has almost quadrupled in value this year on hopes that the company’s vaccine will gain rapid approval. The vaccine will move into a much larger late-stage trial later this month that’s likely to determine whether it’s fit for commercial use.

Although stimulating production of neutralizing antibodies doesn’t prove a vaccine will be effective, it’s considered an important early step in testing. The side effects reported weren’t severe enough in the majority of patients to preclude further testing, according to the report by researchers from the NIAID. 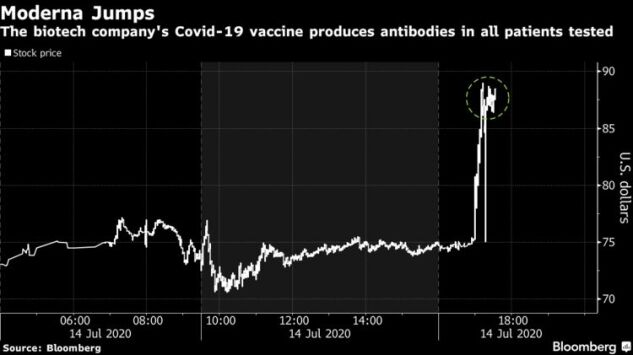 The vaccine news came as the pandemic continued thriving throughout the U.S. While some states that suffered this spring have managed to quell the contagion, fierce hot spots are breaking out in the Sun Belt.

Moderna’s initial results are from the first group of 45 patients who received the vaccine, called mRNA-1273. It evaluated three doses that were given in a two-shot regimen. The middle one was selected for use in the large final-stage study that is slated to begin on July 27th.

In the trial, participants received the two shots 28 days apart. After the first dose, all of them generated antibodies that bound to the coronavirus, but most did not yet produce antibodies capable of neutralizing the virus.

But all 42 people who got both scheduled doses of the vaccine generated antibodies capable of neutralizing the coronavirus, according to the study results. The final-stage trial will compare the vaccine to placebo shots in 30,000 healthy people at high risk of contracting Covid-19.

One significant limitation of the data is it includes information only from the first 45 patients in the study, all of whom were from age 18 to 55. Results from a second portion of the phase 1 trial that included older people -- a key demographic for any Covid-19 vaccine, given the high death rate in older patients -- are not available yet.

, a former researcher who chairs Access Health International, said the levels of neutralizing antibodies produced were “respectable” and possibly protective. But he said “the jury is out” on the vaccine’s safety.

To contact the reporters on this story:
in New York at rlangreth@bloomberg.net;
in London at jlauerman@bloomberg.net