Industry analysts agree the projected $85 billion number recently put forward as the “addressable market” for litigation finance is much too high, but offer no overall consensus.

There is no consensus figure for how much money investors plow into U.S. lawsuits each year. But it is not $85 billion, a number recently put forward as the “addressable market” for litigation finance by a publicly traded litigation financier.

Market Size: Omni Bridgeway says that is how much money U.S. plaintiff lawyers are estimated to earn in a year for commercial litigation. Litigation finance firms mostly pay plaintiff lawyer fees in exchange for a return of their cases’ rewards.

Judge Awards $1 in Fees, Rebukes Law Firm in ‘Simple’ Wage Case
An Arkansas-based plaintiffs’ firm was scolded by a federal judge and permitted to recover only $1 in attorney’s fees for the work it did on a “run-of-the-mill” Fair Labor Standards Act overtime case involving more than 160 workers.

Virtual Selection, Virus Screening Among Judiciary Jury Guidance
The federal judiciary issued recommendations on how juries can proceed in the coronavirus era that include pre-screening jurors based on health, using larger courtrooms for jury assembly, and virtual jury selection in certain circumstances.

Rule Barring Harassment by Lawyers Adopted in Pennsylvania
Pennsylvania has become the seventh state to adopt a version of an American Bar Association rule aimed at curbing harassment and discrimination that critics say could chill speech.

Judge Awards $1 in Fees, Rebukes Law Firm in ‘Simple’ Wage Case
An Arkansas-based plaintiffs’ firm was scolded by a federal judge and permitted to recover only $1 in attorney’s fees for the work it did on a “run-of-the-mill” Fair Labor Standards Act overtime case involving more than 160 workers.

California Judge Denied Appeal of Removal Order
A California judge lost his bid to have the state supreme court review his ordered removal from the bench for misconduct allegations that included gender bias.

Becton Dickinson Investors Get Lead Plaintiff for Software Suit
Becton, Dickinson & Co. investors who accused the company of misleading them about software errors in its infusion pumps secured a lead plaintiff for their would-be class suit in New Jersey federal district court.

Follow Bloomberg Law’s global coverage of the coronavirus pandemic on our Coronavirus Outbreak channel, and track the latest changes in the federal court operations with our interactive map. 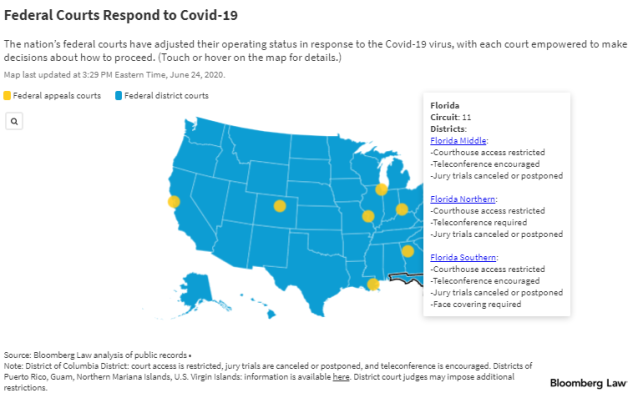 
Death of Ex-Baker McKenzie Chair a Suicide, Inquest Hears
In today’s column, as Big Law firms make cost cuts to ease the Covid-19 cash crunch, some are pressuring their landlords for breaks on their considerable real estate costs; Sidley Austin is representing pro bono a freelance photographer who says she was blinded in one eye by a police rubber bullet during Minneapolis protests over George Floyd’s killing; Fox Rothschild, noting the protests roiling the country, named a partner as its first-ever chief diversity and inclusion officer; Alston & Bird grabbed a white collar litigator who counts President Trump as a client; Simpson Thacher was No. 1 U.S. firm in London for revenue per lawyer last year.

INSIGHT: Ninth Circuit Denies Stay of Keystone XL Permit Decision
The Ninth Circuit Court of Appeals recently denied a request to stay a recent district court decision halting the Keystone XL Pipeline Project. Saul Ewing Arnstein & Lehr attorneys say the court’s ultimate ruling has broader implications for the general permitting process, and could serve as a basis for other courts to vacate and remand other nationwide permits applicable to development of all kinds.

INSIGHT: Health-Care M&A Post-Pandemic—Opportunities, Not Opportunism
The health-care industry has been devastated by the Covid-19 pandemic, and post-pandemic deals, partnerships, and mergers are expected to rise. King & Spalding attorneys and a senior vice president at ReviveHealth say as health systems race to the altar to beat out competitors for M&A targets and other strategic relationships, it’s critical that they are thoughtful in structuring their deals, justifying the activity, and communicating the benefits.

INSIGHT: Protecting Key Employees, Trade Secrets in the Post-Covid-19 Job Market
As businesses reopen and realign after Covid-19, smaller employers or start-ups will have a chance to hire “big company” talent, and larger employers may be able to cherry pick talent from weaker competitors. Epstein Becker Green attorneys say restrictive covenants also may be less enforceable and protecting key employees and trade secrets is more important than ever.

To contact the reporter on this story: in Washington at jashton@bloomberglaw.com