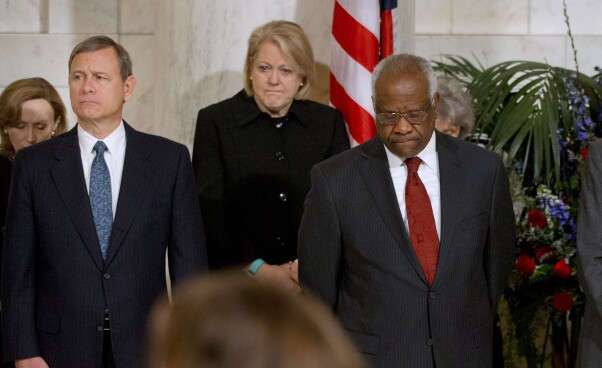 Conservative activist Ginni Thomas’s reported White House meeting with President Donald Trump has reignited criticism over her contacts with administration officials and advocacy on issues that could come before her husband, Supreme Court Justice Clarence Thomas.

The nearly 60-minute meeting last week along with other conservatives focused largely on dissatisfaction with administration appointments, according to the New York Times, but also touched on a number of controversial issues like transgender service in the military, which is the subject of several current legal challenges.

One watchdog group called for Justice Thomas to “consider recusal in order to safeguard the integrity of the judiciary.” But an ethics scholar told Bloomberg Law that close contacts with executive branch officials aren’t unusual for Supreme Court justices, and don’t typically result in recusals.

Ginni Thomas’s outspoken advocacy for conservative groups is unusual for Supreme Court spouses, who tend not to have such high-profile public personas. But Thomas has long been a player in conservative politics.

“For over 35 years, Ginni Thomas has battled for conservative principles in Washington,” including holding “top executive positions at the Heritage Foundation, Hillsdale College, Capitol Hill, the Department of Labor, and the U.S. Chamber of Commerce,” her website says.

Thomas’s outspoken advocacy has drawn criticism in the past. She came under fire for criticizing the Affordable Care Act as unconstitutional. The Supreme Court ultimately upheld the landmark legislation in a 5-4 vote, with Thomas in the dissent.

More recently, Ginny Thomas has taken heat for her social media postings, which are highly critical of Democrats and supportive of Trump.

And while that “activity could lead to a recusal of her husband in a particular case” if “she played a significant role in the underlying events leading to a case before the court,” mere contact with executive officials typically hasn’t been the basis of widespread recusals, Gillers said.

Justice Antonin Scalia famously refused to take himself off of a case involving then-Vice President Dick Cheney, despite the two being friends and attending a duck hunt together while the case was working its way through the lower courts.

Given that many justices have reached the high court “precisely because they were friends of the incumbent president or other senior officials,” a rule requiring recusal where “the official actions of friends were at issue would be utterly disabling,” Scalia wrote.

Justice Thomas declined to comment, according to a Supreme Court spokeswoman.

Gabe Roth, of the watchdog group Fix the Court, acknowledged that “Supreme Court spouses have the same First Amendment rights, including the right to petition the government, as anyone else.”

“But at a time in which the public’s faith in our federal courts is declining, it may be wise for justices and their families to consider avoiding activities, like private meetings with the president, that would impugn the judiciary’s integrity,” he said.