Federal Judge Ricardo Martinez has had to get creative in dealing with a serious shortage of judges in his Seattle-based court.

He’s tapped bankruptcy judges, magistrate judges, and senior judges that have gone into semi-retirement. What he doesn’t have are enough active district court judges.

While the Republican-led Senate has pushed through President Donald Trump’s judicial selections at a historic pace, no nominees have been put forward for vacancies in the U.S. District Court for the Western District of Washington. And all three of the active judges Martinez does have—including himself—will be eligible to take senior status in September.

The combination of lengthy refill times and soaring caseloads per judge means the vacancies in Martinez’s court meet the federal court administration system’s criteria for a judicial emergency. His four emergencies are among the 54 nationwide in district courts, up from the 33 that Trump inherited from the Obama administration.

District courts notorious for a large volume of litigation, like New Jersey, are feeling the pinch. Most of the emergencies are in Democratic-leaning states like Washington.

“I saw what happened with the Obama nominees,” said Martinez, referring to three lawyers who were put forth in April 2016 but who were never confirmed. “My biggest fear is nothing is going to happen until after the next [presidential] election.”

It’s likely a result of the White House not making enough nominations and blue state senators not reaching agreement with the administration on nominees. One Senate custom of approval, known as the “blue slip,” remains in place with district court nominees even as it’s been ignored with Trump’s appellate court choices.

While Democrats may be able to stave off Trump-appointed district judges in their home states by not returning blue slips, they’re also caught in a Catch-22: Acquiesce to the White House’s picks and see their courts potentially shift rightward, or refuse compromise and risk worsening judicial emergencies in their home courts. 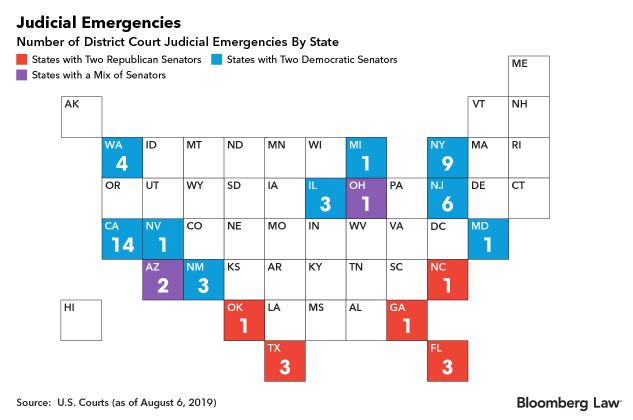 Judicial emergencies are determined by a formula that includes how long a vacancy has existed and how many weighted filings a judge in that district handles.

Blue states generally have larger populations and therefore more judgeships to fill. But that’s only part of the picture: Texas, which has a little over 50 active district court judgeships, has three judicial emergencies, down from 11 when Trump took office.

At the same time, emergencies in California, with a little over 60 active district court judges, increased to 14, up from one when Trump took office.

chief judge of the U.S. District Court for the District of New Jersey until his retirement in May, said his former court handles a large number of cases, with an outsize proportion involving complex matters including patent disputes, securities fraud, class actions and multi-district litigation.

The court has 11 active judges out of a possible 17. All six vacancies are classified as emergencies.

“When dockets get overwhelmed by [judge] shortages, there’s going to be that delay in the handling of the cases, which creates pressure within the court because the judges want to do the right thing and dispense justice in a timely fashion,” said Linares, now a partner at McCarter & English in Newark.

The influx of litigation and dearth of judges mean litigants often have to wait for years for their cases to be heard. And the Speedy Trial Act, which establishes time limits for criminal cases, has resulted in a backlogged civil docket.

Linares helped mitigate the “tremendous strain” on his court by leaning on senior judges, hiring additional magistrate judges, and increasing funding for litigants who represent themselves. But the real change, he said, needs to come from those in Washington, D.C. striking a deal on additional district court judges.

“Judges don’t care whether they’re Republicans, Democrats, or independents,” Linares said. “They just want qualified, able people who are going to get in there and start doing the job that needs to be done.”

A spokeswoman for Sen. Bob Menendez (D-N.J.) declined to comment, and a spokesperson for Sen. Cory Booker (D-N.J.) didn’t return requests for comment.

In the Western District of Washington, there are more judicial emergencies than active judges. Three of its four vacancies have sat unfilled since 2016.

The offices for the state’s two senators did not reply to multiple requests for comment.

The district, with courts in Seattle and Tacoma, handles cases involving companies likeand . Martinez, the chief judge there, said his fixes to cover for the lack of active judges won’t work for too much longer.

“Sooner or later we’re going to hit the point of diminishing returns and we won’t be able to do any more,” Martinez said. “If it weren’t for my senior judges pulling as strongly as they do, from filing to trial, that delay would be way up.” 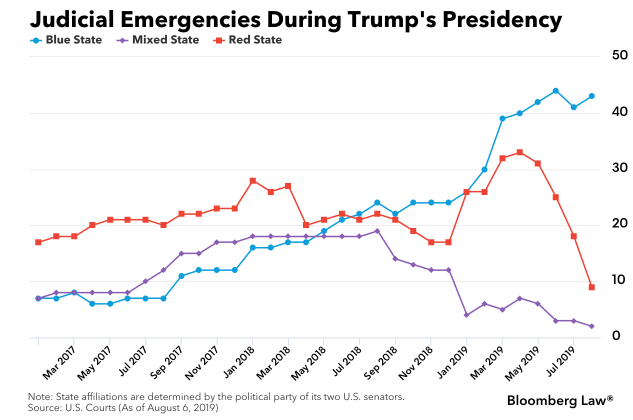 The White House prioritized nominees for federal appeals court vacancies, hoping to exert influence on the courts that act as the last stop for nearly all cases except for the few that reach the U.S. Supreme Court. Trump has reduced the number of circuit court emergencies to two, from the 10 he inherited.

The Senate has so far confirmed nearly 150 Trump judicial nominees to lifetime appointments, the fastest pace of a president at this point in his term since Bill Clinton. They’ve helped Trump deliver on his campaign promise to reshape the courts with young, ideologically conservative judges.

“Reagan helped reshape the court in a conservative image,” said Lauren Bell, a professor of political science at Randolph-Macon College, who added that Trump is seeking to emulate his impact on the judiciary. “In both cases we see that shift rightward.”

Of the 63 district court vacancies without a nominee, 37 are in blue states and 15 are in red states, according to a Bloomberg Law analysis of U.S. Courts data. The remaining vacancies are in states with a mix of Republican, Democratic and independent senators, and one vacancy is in Puerto Rico.

“The White House doesn’t name nominees it knows it’s not able to confirm,” said , a professor at the University of Richmond School of Law. “There’s no point in nominating someone they know certain Democratic senators are going to oppose.”

Red states like Texas have fared better in getting nominees, and, by extension, confirmations. The Senate last week confirmed six nominees to U.S. district
courts in the state.

“Relatively early in the administration, there were some deals made about Trump’s judicial nominations from Illinois in return for some amount of consideration in other nominations,” said Jonathan Adler, a professor at Case Western University School of Law. “There are other states like California where it doesn’t look like people are even talking to each other, let alone reaching a deal.”

District court confirmations have accelerated since the spring when Senate Republicans, with an expanded majority, changed procedural rules to speed confirmations.

The change neutralized a key Trump-era Democratic procedural strategy for slowing nominations that had forced an extended waiting period between two Senate floor votes in the confirmation process.

A sharply divided Congress also has increased the pace of some judicial confirmations.

“Congress is paralyzed, and legislation that gets through the House will not get through the Senate,” said Michael Gerhardt, a professor at the University of North Carolina School of Law. “So what does that leave? Judicial confirmations.”

That said, judges can’t be confirmed if they haven’t been nominated, leaving gaps in blue state courts.

But it’s not clear whether the White House and Democratic senators will come together on new nominees, or whether Democrats and Republicans in the Senate will ultimately work together in confirming any in the pipeline, including some ticketed for emergency seats.

As long as judicial emergencies aren’t filled, courts will continue to struggle to keep up with increasingly heavy caseloads.

“You know how the saying goes,” said Tobias, the law professor. “Justice delayed is justice denied.”

—With assistance from Christina Brady