Jones Day managing partner Stephen Brogan is expected to step down from his leadership role this year and hand-select a successor from among a handful of candidates, according to four people familiar with the firm.

Brogan, who has led the firm since 2003, has told multiple people this will be his last year at the helm, according to the sources, who spoke on the condition of anonymity to protect professional relationships tied to Jones Day.

The list of likely candidates includes Traci Lovitt, who leads the firm’s vaunted issues and appeals practice; Kevyn Orr, who was promoted to partner-in-charge of the U.S. this year, and Greg Shumaker, who heads the global disputes practice, the sources said.

Noel Francisco—the former U.S. Solicitor General during the Trump administration who now leads the Jones Day Washington office—is also a possible successor though viewed as less likely to succeed Brogan, according to the people. Orr and Shumaker are also based in Washington, while Lovitt works out of the firm’s New York office.

Jones Day’s managing partner is granted more authority than at virtually any other major law firm. The leader has the authority to “make all management decisions,” the firm’s website says, including the right to select the next leader.

That autonomy makes it nearly impossible even for current Jones Day partners to know who will be picked as the next leader. The firm says its “standard practice” is to designate the successor “by written instrument.”

A Jones Day spokeswoman did not respond to a phone call and email seeking comment.

Brogan became the seventh managing partner since 1913 when he took the post and will have served 20 years in the role at the end of this year. His tenure would be the third longest among Jones Day’s managing partners.

Brogan was age 50 when the firm announced in late 2002 he had been selected managing partner by his predecessor, Patrick McCartan. The lawyers share deep ties to University of Notre Dame: Brogan serves on the university’s board of trustees, which McCartan once chaired.

McCartan died in November 2020 at 86. Brogan called him “the greatest partner in the history” of the firm. 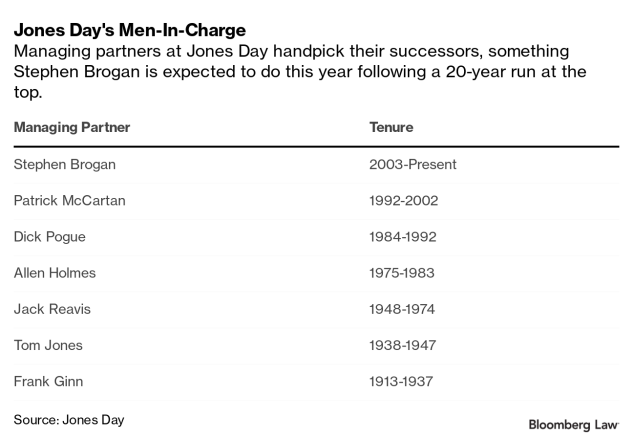 “This governance system has never been the subject of any disagreement within the firm,” Jones Day says on the website. “It is one of the critical components of an institutional management approach that has been an important element of the firm’s success over the last century.”

If the retirement age provision remains in practice, Brogan might be encouraged to pick a younger successor, the people said.

Lovitt and Francisco are each more than a decade from the original mandatory retirement age of 65. Shumaker and Orr would have fewer years before hitting that target.

Lovitt was first identified as a potential successor in February by two former Jones Day lawyers who are suing the firm, alleging its parental leave policies are sexist.

The lawyers, Mark Savignac and Julia Sheketoff, said Lovitt had been deemed Brogan’s “chosen successor,” according to their third amended complaint.

Jones Day said in a court filing that the claim was irrelevant and made to garner media attention.

Lovitt is a past clerk for Supreme Court Justice Sandra Day O’Connor. The issues and appeals practice she leads routinely hires more clerks from the top court than any other Big Law firm.

Shumaker has been at Jones Day for nearly 35 years. He served as a lead trial lawyer in the City of Detroit bankruptcy proceeding that generated tens of millions in revenue for the firm.

Shumaker also has Notre Dame connections. He graduated from the law school in 1987 and has served on the board of directors for the Notre Dame Law School Association since 2002.

Orr initially joined Jones Day in 2001 and was instrumental in the firm’s Detroit bankruptcy case. He served as emergency manager of the city, causing him to take a leave from the firm, to which he returned in 2015.

Orr was promoted from leading the Washington office to a new position overseeing the firm’s U.S. operations last year.

Francisco’s first stint at Jones Day began in the mid-2000s, when he served as chair of the firm’s government regulation practice. He regularly appeared before the U.S. Supreme Court.

That became his day job as Solicitor General from 2017 through July 2020, as he personally argued 17 cases before the high court.