The Bureau of Land Management will finish the 2021 fiscal year having approved more onshore oil and gas drilling permits than under the Trump administration a year earlier—but has slashed monthly permitting amid what the industry says is a bureau pivot toward President Joe Biden’s climate agenda.

The drop was especially dramatic in August, according to bureau data released this week.

Industry leaders and analysts say the bureau appears to be forging ahead with its climate agenda ahead of COP26, the United Nations international climate conference in November in Scotland.

“At some point, the administration has to stop trying to overcome headwinds from producers and think about whether or not it’s going to deliver a message on the world stage in Glasgow,” said Kevin Book, an energy analyst and managing director at ClearView Energy Partners LLC.

“In the run-up to COP26, the Biden administration is not going to set any permitting records,” Book said. 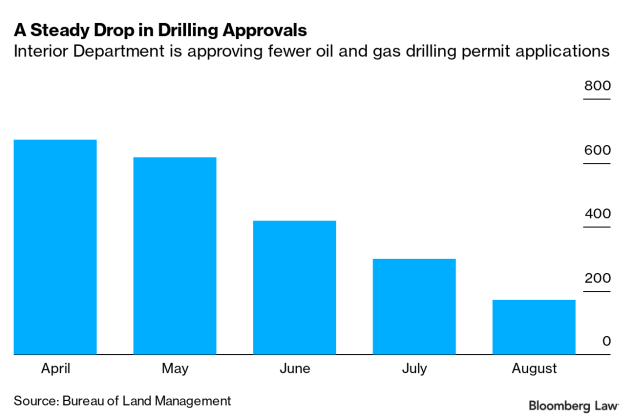 The bureau didn’t immediately respond to a request for comment. But Laura Daniel-Davis, Biden’s nominee for assistant Interior secretary for land and minerals management, said Thursday at the bureau’s 75th anniversary symposium that it’s focusing mainly on renewable energy development.

“While BLM-managed land will continue to be producing conventional energy for the foreseeable future, it’s renewable energy that is key” to addressing climate change, she said.

But with just a week left in fiscal 2021, the land bureau will finish the fiscal year having approved more drilling permits than during the Trump administration’s last year in office. It approved 4,881 applications as of Aug. 31, while approving 4,631 total in fiscal 2020.

The bureau has processed many of the permit applications filed during the Trump administration, and most of the permits issued in fiscal 2021 have been for drilling on existing leases in New Mexico and Wyoming. Filings have remained steady from year to year. 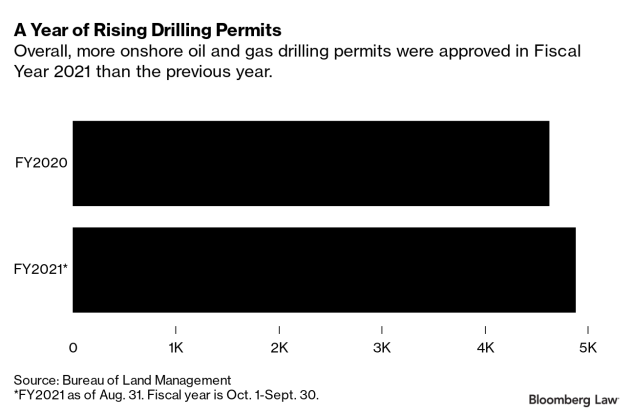 The slowdown in approvals shows the Biden administration is curtailing oil and gas permitting, said Pete Obermueller, president of the Petroleum Association of Wyoming.

“The numbers speak for themselves,” he said. “What their rhetoric is, is battling climate change.”
Drilling demand is still high among oil and gas companies, said Kathleen Sgamma, president of the Western Energy Alliance, which represents oil and gas companies operating on federal lands.

“Perhaps the pressure from the environmental left, upset that BLM under the Biden administration is doing the job mandated by Congress, is having an effect,” Sgamma said.

Slashing fossil fuel emissions is central to the Biden administration’s climate change agenda as the Interior Department reviews the future of the federal oil and gas leasing program to account for its costs to the climate.

The Biden administration was forced by a federal court to end its moratorium on oil and gas leasing.

Interior’s leasing pause “did not affect ongoing permitting on legally-held leases, so that has continued,” Daniel-Davis said Tuesday at her Senate confirmation hearing, responding to a question from Sen. Joe Manchin (D-W.Va.).

“We’ve got 9,000-plus permits available for use as well,” Daniel-Davis said, referring to the 9,776 total drilling permits the land bureau has issued over the last several years and remain valid and available for drilling.

Permits are good for two years, with the possibility of a two-year extension.

The data suggest the administration wants to show it’s meeting its obligation to issue permits for existing leases while avoiding further legal challenges and implementing its climate agenda, Book said.

“They want to be able to say that the industry has enough” permits in hand, Book said.

Environmental groups are accusing the oil and gas industry of stockpiling permits before the Biden administration imposes restrictions on issuing them.