Some law firms are announcing associate and other staff layoffs at the end of 2022 due to a changing business environment.
Getty Images

When Shana Simmons ended her nine-year “marathon” as an in-house lawyer for Google in August, she realized she was burned out. Now the general counsel of legal tech company Everlaw, Simmons is trying to cultivate a work environment that prioritizes wellness and balance.

“The workload can actually continue to be extraordinary, especially against the backdrop of Covid-19 when we are all working from home,” said Patrick Krill, founder and principal of legal well-being firm Krill Strategies.

In-house and law firm lawyers who are eight or more years into their careers experience burnout at about the same rate and work similar hours, according to a recent Bloomberg Law survey. Both groups reported working more than 50 hours per week and said they were burned out more than a third of the time.

In-house counsel also generally haven’t received the especially large bonuses that firms doled out to Big Law attorneys during the pandemic, save for some in the upper echelons of major corporate legal departments.

General counsel may be able to alleviate the burdens on their employees by creating workplaces that value wellness and advocating for more resources from the company, even if they can’t offer most lawyers five to six-figures worth of bonus cash in 2021. 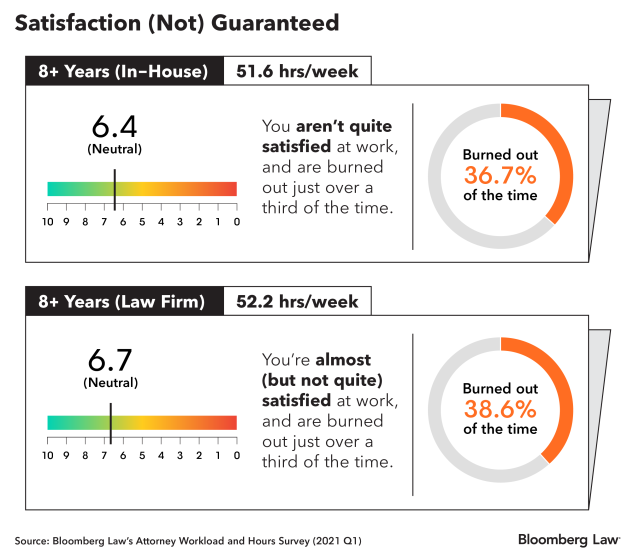 The pressure has been on many in-house lawyers to perform under stress since the earliest months of the pandemic.

A flash poll by the Association of Corporate Counsel last June found that 53% of in-house lawyers were working more hours than before, and 74% reported experiencing moderate to very high levels of burnout.

“When we’re all sitting in our home offices and working from wherever we are, there is an inherent lack of boundaries,” said Marie Ma, deputy general counsel of Gap Inc. “Unless you have permission, or you are given explicit resources to battle against that, it’s natural to have work creep into far beyond the normal boundaries of your life pre-pandemic.”

At the same time as workloads and stressors grow, around 88% of general counsel are planning budget cuts for 2021, according to a recent survey conducted by EY Law and the Harvard Law School Center on the Legal Profession.

The ACC’s most recent annual Chief Legal Officers survey also found that nearly 70% of general counsel had made budget changes as a result of the global pandemic.

Shrinking budgets aren’t surprising for legal departments, which are cost centers rather than money makers like their law firm counterparts, according to Susan Hackett, the CEO of legal consultancy Legal Executive Leadership.

Krill said it’s a good idea for general counsel to advocate for bigger budgets to hire additional staff or invest in legal technology, though he acknowledged that it’s easier said than done.

Budget increases might be impossible for in-house departments in organizations that are tightening their belts across all business units, especially during times of financial uncertainty.

But there are other, simpler ways that those who’ve been in-house leaders say general counsel can help their teams.

Trusting the team is also an important part of stress management, according to former Texas Roadhouse general counsel Celia Catlett, who retired from her role for better work-life balance in August 2019.

“I’m a big believer that we’re all grownups, and we can all figure out how to get our work done,” Catlett said. “When you put that trust in people, they tend to rise to that level and/or exceed it. You don’t have to be sick to have a sick day—mental health, to me, is just as important as taking care of yourself when you have the flu. So do your thing.”