The uber-conservative is dangling before us a return to the era when men were men, gays were closeted, and women always paid the price for being sexually active.

How rich is this? The man who seared the term “sexual harassment” into our collective consciousness is leading the brigade for sexual repression.

It’s been 31 years since Anita Hill’s riveting testimony before the Senate Judiciary Committee claiming then-Supreme Court nominee Clarence Thomas sexually harassed her when he chaired the Equal Employment Opportunity Commission. Thomas vehemently denied the allegations, and in the intervening years, he’s been a quiet presence on the high court. But now he’s having his moment.

Of those dancing on the grave of Roe v. Wade, Thomas seems to be having the jolliest time. Though Justice Samuel Alito wrote the landmark opinion in Dobbs v. Jackson Women’s Health Organization that eviscerated a woman’s right to an abortion, and Chief Justice John Roberts (remember him?) remains the titular head of the court, Thomas is its unmistakable breakout star.

Alito audaciously called Roe “egregiously wrong,” essentially dissing all the justices who decided in favor of abortion rights in the last 49 years. But rather than quietly join the majority’s radical decision, Thomas penned a concurrence that goes even further and asks: Why stop at abortion? Why not use the power of the court to turn back the clock?

In fact, Thomas suggested hacking away at three monumental Supreme Court precedents that protect women and gays in their intimate lives—the right to contraceptives (Griswold v. Connecticut), same-sex relations (Lawrence v. Texas), and gay marriage (Obergefell v. Hodges). He called those decisions “erroneous,” adding, “we have a duty to ‘correct the error’ established in those precedents.”

What’s chilling is that Thomas is putting more hard-fought rights that we thought were long settled back on the chopping block. He’s dangling a return to the good old days, the Mad Men era when men were men, gays were closeted, and women always paid the price for being sexually active.

‘Speaking Out Loud What Others Are Thinking’

“He’s seizing a moment when he can act on his views of law and politics, which had been stymied,” said Paul Schiff Berman, a professor at The George Washington University Law School and former clerk to Justice Ruth Bader Ginsburg. Supreme Court litigator extraordinaire Paul Clement told The Wall Street Journal: “I don’t think Justice Thomas has ever had a better term on the court.”

And unlike the majority opinion in Dobbs that leaves us in the dark about the aftermath of overruling Roe, Thomas gives us a roadmap where it could all lead.

“He has a radical vision that goes further than any other justice in the history of the Supreme Court—even further than (Justice Antonin) Scalia,” said Radhika Rao, a professor at University of California, Hastings College of Law, who clerked for Justices Harry Blackmun and Thurgood Marshall. Though Rao scoffed at the notion that Thomas is now the court’s guru or visionary, she admitted: “We can credit Thomas for his candor. He’s speaking out loud what others are thinking.”

Indeed, Thomas deserves extra credit for laying bare the mendacity and flawed logic of the majority opinion. If the basis of Alito’s ruling is that abortion is not a right “deeply rooted in this Nation’s history and tradition” that merits constitutional protection, the same can be said for gay rights and contraception—the targets of Thomas’s concurrence. 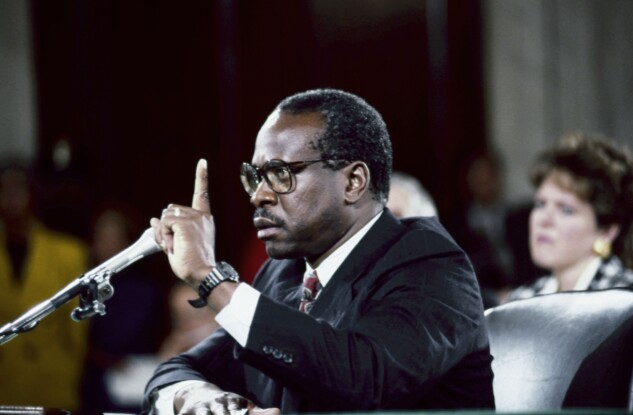 Clarence Thomas responds to questions from members of the Senate Judiciary Committee during his Supreme Court confirmation hearing on Oct. 11, 1991, the day Anita Hill accused him of sexual harassment. Thomas’s wife, Ginni, is seated in the background.
Photographer: Mark Reinstein/Corbis via Getty Images

It’s also a point that the dissenting opinion highlights: “Either the mass of the majority’s opinion is hypocrisy, or additional constitutional rights are under threat. It is one or the other.” So despite Alito’s mealy-mouthed assurances that the high court has no interest in upsetting those rights, why should anyone believe it?

Of course, Thomas’s candor goes only so far. Conspicuously missing from his list of “erroneous” rulings that need correcting is Loving v. Virginia, the 1967 case that legalized interracial marriage. Is it because Thomas, who’s Black, is married to Ginni Thomas, who’s White? Or is there a legal rationale for his omission?

“You could argue that the racial aspect of Loving distinguishes it from the other cases which rest on substantive due process,” said Rao. “Loving is different because it also involves equal protection.” But, she added, “Thomas also believes in originalism, and the intent of the framers was never to legalize interracial marriages.”

It seems too obvious to say that Thomas is being hypocritical on this issue except that he has a pattern of being self-serving. For instance, Thomas is an ardent foe of affirmative action, though he himself has been a beneficiary. And let’s not forget how he’s refused to recuse himself from cases arising from the Jan. 6 insurrection, despite his wife’s involvement in efforts to overturn the results of the 2020 presidential election. In any case, there’s an elephant in the room that he’s dodging.

What’s clear is that Thomas can no longer be dismissed as the outlier. His views carry consequences—increasingly so. Already, government officials and states seem to be taking a page from his playbook to wreak havoc on all types of privacy rights. South Dakota just banned telemedicine appointments with providers who prescribe morning after pills. Texas Attorney General Ken Paxton made noises that he’s open to reinstating sodomy laws. And Alabama has requested that a federal court lift an injunction against a law that penalizes giving puberty blockers or hormones to transgender minors.

This is just a sampling of what’s to come. I can only imagine what diabolical fun government officials and cultural warriors must be having cooking up ways to make sex and reproductive choices as invasive and painful as possible.

And how strange that the icon for workplace harassment is now leading us back to the land of the Puritans. I know we should be used to the incongruity by now. After all, we had a president, adored by the Christian right, who bragged about grabbing women by their genitals.

Still, the irony is galling.

Vivia Chen
Columnist
Kirkland & Ellis’s Adieu to the NRA: Out, Out Damn Spot! (1)
Roe v. Wade, the Second Amendment, and America’s Culture of Life
Are Abortion Rights Just for Privileged Careerists?
© 2022 The Bureau of National Affairs, Inc.
All Rights Reserved