Jason Bennett has seen price shocks from Baker Botts offices around the globe, including from Moscow in 1998, when oil plunged to $10 a barrel.

Back then, when ailing companies saw bankruptcy as the only way out, there wasn’t much question they’d go to Bennett’s firm or other Texas born-and-raised partnerships to represent them.

In those days, Bennett’s firm and a handful of other Texas partnerships reigned supreme back home in Houston. This time, Big Law’s energy industry establishment is competing with national firms that weren’t in Houston during the last plunge. For what they may lack in long-term relationships, the newcomers are larger, wealthier, and well-stocked with a newly precious commodity: bankruptcy lawyers.

Who wins during the downturn could go a long way to determining the power balance in Houston’s Big Law market for a long time to come.

“I’ve seen the same competitors all over the world,” Bennett said. “So to me it was no great surprise when the same people I’ve been competing with my whole career showed up in Texas.”

Houston’s high-end legal market was once dominated by the so-called “Big Three” Texas firms: Vinson & Elkins, Baker Botts, and Fulbright & Jaworski (now known as Norton Rose Fulbright). Now, 14 of the 15 largest law firms by revenue have an office there—with 10 of those arriving only since 2005.

Latham & Watkins and Kirkland & Ellis, which opened offices in the city in 2010 and 2014, respectively, muscled their way into the energy M&A market in the good years and lured away dozens of partners from the hometown firms by offering bigger paychecks. That, they say, has positioned them for the bankruptcy business that lies ahead.

Kirkland has already banked millions in shale-related bankruptcy fees since the last time oil prices sank in late 2014. It billed $6.75 million leading up to the April bankruptcy filing of Whiting Petroleum Corp., the first major West Texas shale producer to seek Chapter 11 since the coronavirus pandemic dried up demand and Saudi Arabia and Russia created a glut of crude on the market.

Every law firm in town prefers boom times. But there’s opportunity in the bust, too. The outcome may hinge on how successfully the firms are able to shift from closing transactions to working on bankruptcies, and who wins clients’ loyalties for when the crisis passes.

“The big question in our industry is: If there has to be consolidation among our clients, because there are too many of them or there is too much production, does that mean that there also has to be consolidation among the law firms servicing those clients?” said Cliff Vrielink, co-managing partner of Sidley Austin’s Houston office. “And probably the answer is, yeah, there are too many lawyers doing that kind of work.”

For law firms, financial centers like New York and London have historically been the most prestigious and important markets, but the route to the top of Big Law has more recently carved its way through Houston.

In 2005, four of today’s 15 largest law firms by revenue had an office there. Today, all but one of those has a presence in Space City. Eight of those offices are led by lawyers who were formerly partners at Vinson & Elkins, Baker Botts, Akin Gump, or Baker Hostetler.

Latham & Watkins is credited with writing the playbook for entering Houston in 2010 when the Los Angeles-founded firm hired seven partners from across Vinson & Elkins, Baker Botts, and Akin Gump.

“These were the guys telling clients before that you can’t hire anyone but Baker Botts, Andrews Kurth Kenyon, Fulbright & Jaworski or V&E to do an oil and gas deal,” said a partner at a rival firm. “Or, of course, you can now hire me at Latham. That’s how they managed to break into the market.”

If Latham figured out how to launch a Houston office, Kirkland & Ellis cracked the code on expanding one: write big checks. The firm launched in Houston in 2014 by hiring a former Simpson Thacher lawyer, Andy Calder, who led the office to its current size of almost 180 lawyers.

In six years, the firm’s office has grown to about the same size as Norton Rose Fulbright’s, which has been in town for more than 95 years.

Kirkland has recruited more lateral partners to its Houston office, 34, than any other law firm since the start of 2015, according to data from Leopard Solutions. Kirkland has the financial firepower to double the pay of lawyers from some firms.

One reason national firms have been able to hire so many lawyers from traditional Texas powerhouses is a yawning gap in those groups’ profitability. Kirkland brought in more than $4 billion in revenue in 2019—an all-time record—according to AmLaw. The firm’s average equity partner earned last year more than $5 million. 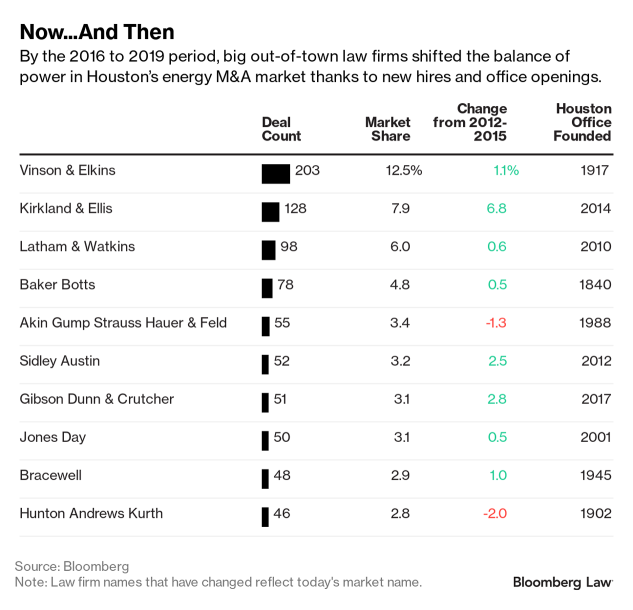 Vinson & Elkins has remained the leader in M&A, handling more deals involving a Texas-based energy firm than any other law firm in nine of the past 10 years, according to data compiled by Bloomberg.

“The big advantage we have is we’ve been in Texas for over 100 years and so our relationships are deep,” Vinson & Elkins chairman Mark Kelly said. “The expertise we have, certainly in the energy space, is I would say superior to most firms and I think the fact that we have the number of lawyers we have in Texas is a real benefit for us.”

Still, two lawyers in Houston, who declined to be named discussing competitors’ compensation, said Vinson & Elkins has had to adjust its pay structure to better compensate younger, high-performing partners.

“V&E was able to keep its main talent for the most part,” said a partner at a competitor firm. “It is not going to get easier, though. That’s the one thing. This direction is not going towards regional firms.”

Latham, Kirkland, Sidley Austin, and Gibson Dunn ranked in the top 10 firms advising on M&A involving Texas-based energy companies from 2016 through 2019, according to data compiled by Bloomberg. Of those four firms, only Latham was also in the top 10 in a similar ranking covering deals from 2012 through 2015. Gibson Dunn didn’t even arrive in Houston until 2017.

“It had a huge effect on the Houston legal market. To me, that was the single greatest factor,” Baker Botts’ Bennett said of private equity firms entering the oil and gas industry. “Law firms that had really close private equity relationships were able to build big shops in Houston faster because they had such large demand from that client base. All they had to do was accumulate the talent to do it.” 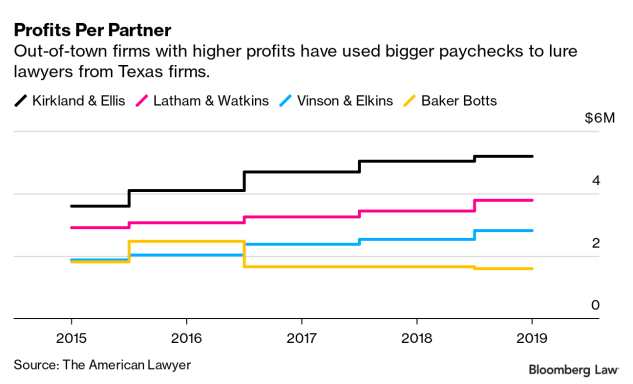 Almost 40% of oil and natural gas producers are facing insolvency within the year if oil prices don’t rise above $30, according to a survey by the Federal Reserve Bank of Kansas City. And those cases can bring whopping legal fees for law firms that win the representation of the bankrupt companies.

“Everybody’s fighting for the work,” said Gibson Dunn’s Michael Darden, who started his career at Baker Botts. “There are not a lot of deals going on, but there’s still quite a bit of legal activity. And this is where long-term relationships between companies and lawyers and law firms become really, really important.”

There were 40 oil and gas producers that listed more than $1 billion in debt when they filed bankruptcy since 2015, according to Haynes & Boone. Dockets for 32 of them contained data on fees, according to a Bloomberg Law search. Among those 32, Kirkland represented 12, and billed at least $240 million between services provided pre-filing and work it detailed to bankruptcy courts.

“Our Houston office was always opened to service oil and gas industry clients in a healthy market with relatively high energy prices,” Kirkland’s Calder said in an interview. “It’s obviously great that we had a restructuring hedge, but that was never the game plan behind opening Houston or Texas generally.”

Phones are ringing for bankruptcy lawyers across the state.

“I have a standing conference call at 6:45 in the morning every single day,” said Sarah Link Schultz, a bankruptcy partner at Akin Gump in Dallas. “It is a busy, busy time for people in the restructuring world.”

“We are very focused at this point on this restructuring-type practice,” Fenn said. “And the combination of those bankruptcy partners coming and working with us in Houston on energy clients has been particularly powerful.”

The Chapter 11 process often brings on management changes, meaning that law firm allegiances can become newly up for grabs. Law firms that guide those companies through the process may have a leg up to remain after the crisis, lawyers said.

“If management teams change we want to be in front of them and say, ‘We did a great job in connection to the restructuring and got you where you are and we have a full interest in making sure that we continue to support this relationship,’” Vinson & Elkins’ Kelly said.

Firms whose fortunes remain strong in the downturn will have a bigger war chest to hire partners. And even more recent entrants to Houston have felt the pressure of Big Law’s version of a price war.

Sidley’s Vrielink said a competitor law firm in recent years was offering “unheard of” upfront bonuses in an effort to lure away his firm’s young, promising lawyers in Houston. He told that to the general counsel of an offshore drilling company.

“The client said, ‘Well, it sounds like the law firm world is becoming a lot like other industries,’” Vrielink said. “In the long run, that was probably inevitable, but law firms were insulated against that for a long time.”

When asked to provide the name of the law firm, he declined.

“Every lawyer in town can tell you who it is,” he said.