A short-term victory on Pennsylvania voting rules is giving Democrats new reason to worry that quick confirmation may lead to a much bigger defeat should the Supreme Court have to decide the presidential election.

The court’s 4-4 Monday night left in force a three-day extension for the receipt of absentee ballots in the pivotal state. For now, that gave Democrats what they sought, potentially letting thousands of additional ballots be counted.

But four conservative justices -- , , and -- said they would have overridden a Pennsylvania Supreme Court ruling and reinstated the Election Day deadline set by the state’s election code. 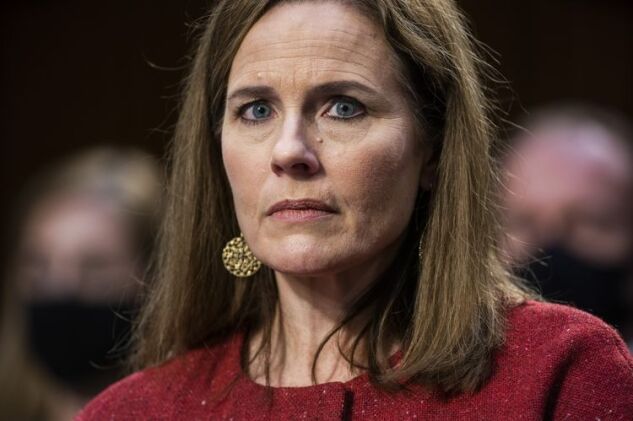 And with Barrett poised to win Senate confirmation to the high court as soon as Monday, those four may soon get the fifth vote they would need to overturn any state court ruling that expands voting, or otherwise favors Democrats. President has said he is counting on the court -- with Barrett aboard -- to back him in any dispute with Democrat .

The 4-4 decision “shows that Justice Barrett could well be a deciding vote that could hand an election to Trump in any Trump v. Biden post-election dispute,” tweeted , a voting rights expert who teaches at the University of California, Irvine School of law.

Trump has spent months laying the groundwork for a legal fight, claiming despite minimal evidence that mail-in voting will produce widespread fraud. Barrett, who would join Gorsuch and Kavanaugh as Trump-appointed justices, has refused to say whether the president’s comments would prompt her to recuse from any election case.

“I think this will end up in the Supreme Court and I think it’s very important that we have nine justices,” Trump said on Sept. 23, just before the nomination.

The Pennsylvania fight summoned memories of the 2000 Bush v. Gore ruling, a 5-4 that sealed the presidential election for Republican . In a concurring opinion in that case, three conservative justices said the Florida Supreme Court usurped the authority of the state legislature by interpreting Florida’s laws to allow a recount that might have benefited Democrat .

Pennsylvania Republicans made similar arguments in the latest case. Citing the Bush v. Gore concurrence as well as a key 1892 precedent, they said the Pennsylvania Supreme Court violated a U.S. constitutional provision that lets state legislatures set the rules for the presidential election.

State law had required ballots to be received by 8:00 p.m. on Election Day. In extending that deadline because of the Covid-19 pandemic and expected mail delays, the Pennsylvania Supreme Court pointed to a state constitutional clause that guarantees a “free and equal” election.

Republicans also said the extension violated federal laws that establish a single nationwide Election Day. The Pennsylvania court ruling had required election officials to presume that any ballot received by Nov. 6 was mailed by the Nov. 3 deadline, even if it lacked a legible postmark.

It’s not clear what arguments resonated with the court’s conservatives. None of the justices gave reasons Monday night, disposing of the case in a pair of two-sentence orders after weeks of internal deliberations. Chief Justice joined the court’s three Democratic appointees to reject the Republican requests.

But whatever their thinking, the conservatives indicated what could prove a crucial willingness to intervene even when a state supreme court is interpreting its own laws. The Pennsylvania fight could return to the U.S. Supreme Court after Barrett is confirmed if Republicans renew their request for a stay or press similar arguments as part of a post-election challenge.

And the Supreme Court is likely to face similar questions involving other swing states where Republican-controlled legislatures have resisted calls to ease voting rules over virus fears. The high court is currently weighing a Democratic request to reinstate a six-day extension in Wisconsin after it was blocked by a federal appeals court.

“It’s a short-term win for Pennsylvania Democrats who wanted to extend the absentee ballot deadline,” said Josh Douglas, an election-law professor at the University of Kentucky School of Law. “But for the long term, it means the court may be open to reverse favorable state court rulings on voting rights.”