A sign is seen during a protest for the #MeToo movement.
Stephanie Keith/Getty Images

Lawyers have been doling out lots of advice in the wake of the #MeToo movement, but firms should be attending to sexual harassment concerns on their own turf as well, sources told Bloomberg Law.

Many law firm employees don’t know how to report misconduct and don’t trust their firms to quash it when the perpetrators are superstar attorneys. Even if law firms improve their training and discipline, however, the potential for harassment remains whenever stark power imbalances exist among employees.

“Huge differences in power dynamics” and “relatively little check on that power” are “red flags” that misconduct could occur, Sadina Montani told Bloomberg Law. Montani is a labor and employment shareholder at Vedder Price who represents many law firms.

The imbalance of power can cause underreporting of sexual harassment incidents. Personnel may avoid telling their firm “due to fear” or a feeling that “nothing will happen” to the perpetrator, according to Elizabeth Mell, a consultant who conducted a survey for the Association of Legal Administrators.

Quantifying the problem is difficult, but legal industry organizations such as the ALA and the Women’s Bar Association of Massachusetts are trying.

Meanwhile, the Equal Employment Opportunity Commission has seen a decrease in the number of sexual harassment complaints against law offices during the past several years. Totals ranged from a high of 18 in fiscal year 2011 to a low of four in FY 2017. 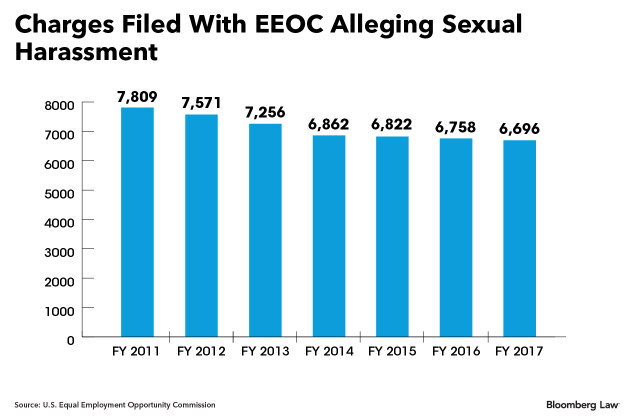 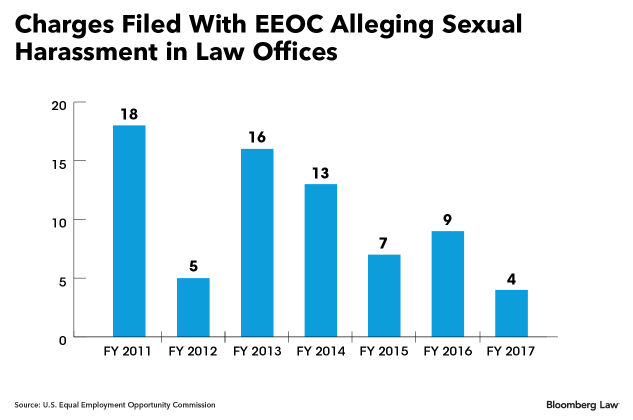 “We’re surprised that the total value is so low,” Cohen said. The amount could swell over time, however. “Keep in mind, there are plenty of things percolating through the system that haven’t gotten” on Advisen’s radar because there hasn’t been a payout yet, he said.

The number of EEOC claims could be dropping because law firms are starting to handle problems before they escalate. The #MeToo movement “is forcing people to act upon the harasser even if the harasser is a big moneymaker,” Heather Steinmiller, managing director and general counsel at insurance broker Conner Strong & Buckelew, told Bloomberg Law. In the past, people “managed around it,” she said.

“I’m seeing complaints being raised on a lower threshold,” perhaps when the misconduct is at “a level 3 instead of a level 8” and “the behavior is still manageable,” Montani said.

She also has noticed that clients are “more willing to part ways” with accused employees. “If an employee has three verified complaints” of a midlevel offense, even without an allegation of an egregious offense, employers are more willing to dismiss the employee than they used to be, Montani said.

“Really good proactive law firms have shored up the processes” and are educating personnel at all levels, Montani said. “I have done more anti-harassment training in the past six weeks than I’ve done in the past 18 months.”

Law firms can buy employment practices liability insurance to help them compensate employees who have been sexually harassed at work, although there may be exclusions for bodily injury, such as rape, or intentional acts, Steinmiller said.

Judging by the survey results, the law firms have some work to do. The Women’s Bar Association survey in Massachusetts revealed nearly 38 percent of respondents had received an unwanted sexual email, text, or instant message at work. About 21 percent said they had experienced or witnessed unwelcome physical contact at work.

Results were consistent regardless of the law firm’s size and the respondent’s age. Eighty percent of the more than 1,200 attorneys answering the Massachusetts survey were women.

The Association of Legal Administrators undertook a nationwide survey of its members in February. Mell told Bloomberg Law that 77 percent of ALA’s respondents said sexual harassment has occurred at their firms.

Seventy-five percent of the ALA respondents said they had been sexually harassed at some point during their career. Eighty percent of ALA’s 461 respondents are female.