On April 2, the day that coronavirus infections around the globe hit 1 million, managers inside were emailing their latest plans for staffing New York-area trading floors amid the deadly pandemic.

One worker on the sales team noticed a colleague wasn’t on the list and asked where he’d be.

“Corona Town, U.S.A.,” the person wrote back. Then one of the bank’s credit-trading leaders, , weighed in: “The trading desk will be in the office unless they have a medical condition with a dr’s note.”

More than 100 employees were on the message chain seen by Bloomberg, and some were horrified. It came soon after an outbreak of Covid-19 inside JPMorgan’s Madison Avenue headquarters, in which at least 16 people tested positive on a single trading floor. Some employees complain they’re getting conflicting messages from middle and senior managers about coming into offices, where billions of dollars of profit are at stake, and that they would rather follow the advice of government officials to hunker down at home.

“We’ve stated many times that anyone who doesn’t feel comfortable coming into the office doesn’t have to,” said , a spokesman for JPMorgan. “We have never had a policy requiring, or even requesting, a doctor’s note.”

Those tensions aren’t limited to JPMorgan. While Wall Street firms have told most employees to work remotely, a number of traders and bankers who set up at home say they have been getting phone calls and messages from managers urging them to return to offices, some of which recently saw infections.

Small and large firms are trying to maintain enough on-site staffing to ensure swift trading. It’s the finance industry’s version of an issue spanning the U.S., where “essential” workers feel they have to choose between keeping their jobs and risking their lives.

Some investment banks have publicly touted the degree to which they are able to let employees work remotely, with recently that only one of every 50 workers was on site. But most trading divisions require additional staffing on high-speed office terminals to handle the deluge of customer orders as markets swing. has said it has about one in 20 trading employees in the office. At JPMorgan it’s about one in five in trading.

Around the same time that JPMorgan bond-trading executives were emailing each other, , the bank’s global head of equities trading, held a conference call with his subordinates. He said the trading division isn’t as effective when too many people are working remotely but that it’s trying to be respectful of people’s circumstances, according to a person who heard the call.

Still, the situation on Wall Street contrasts with the pressures on tellers and call-center personnel to show up in consumer banking operations even though they earn less. And outside the financial industry, the situation is even harsher, with about 10 million people filing for unemployment benefits in just two weeks, and workers at companies such as airing grievances over safety conditions. 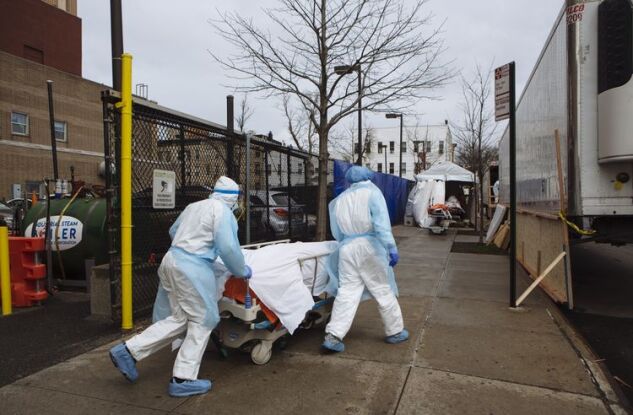 Medical workers move the body of a deceased patient to a refrigerated overflow morgue outside the Wyckoff Heights Medical Center in Brooklyn, April 3.
Photographer: Angus Mordant/Bloomberg

Traders have long been known to work through illness, but in the past few weeks those attitudes have shifted as news stations showed refrigerated trucks outside New York hospitals, medical tents in Central Park and public health officials begging people to stay home.

One trading executive at a major New York brokerage said he wanted to be the last person on his staff to stay at the office. Just before he left for home last month, he was exposed at work to the virus. He eventually developed a cough. Now outside New York, he has been working in solitude and staying up until 1 a.m. He recently got tested but still hadn’t received his results as April began.

Inside , an affiliate of , workers received a memo marked “important” last month notifying them that no government orders were stopping them from showing up. “We remain open,” the memo said. “Driving to the offices and using mass transit are permitted in order to travel to and from our office.” Some BGC employees privately complained they felt pressured to keep coming downtown -- even as other memos laid out the option of working from home. A BGC spokesman declined to comment.

Still, two people at the firm who fell ill said they had no complaints. One credited managers for sending his entire desk home after the first person got sick. Another said he kept working in isolation until his symptoms were too severe, and that managers then gave him ample time off to recover.

Most big banks announced similar strategies for preventing the spread of the virus at work: They assigned skeleton crews to trading floors and so-called disaster recovery sites, and sent the rest home. But within days, traders in offices privately complained about colleagues continuing to cluster around them. Some said they waited weeks for technicians to physically separate rows of specialized terminals.

A JPMorgan trader in London said he was initially sent to the basement of the firm’s 19th-century building along the Thames, where scores of colleagues nervously worked side by side. The conditions improved when back-office staff were allowed to leave. He said he, too, has since been told he needs a doctor’s note to work from home.

Inside New York office, nerves frayed after the French bank sent traders to a recovery site outside the city so cramped that social distancing was impossible, one person said. The firm later ditched the plan and sent people home, where employees received an important email from a top executive: “Highly Confidential: Covid 19 - Staff Infection List.”

Workers who clicked the attachment realized it was an anti-phishing test on behalf of the compliance team and that they had failed it. Many were furious, the person said.

“Natixis strongly rejects any suggestion that it has put its employees at risk,” said Daniel Wilson, a Natixis spokesman in Paris, adding that all investment banking employees in the Americas have been working from home since mid-March. “We have taken rigorous measures in the U.S., as elsewhere, to protect our employees’ health and help slow the propagation of the virus.”

Market swings can generate big profits and losses for banks, and most executives agree it’s easier to navigate the turmoil from trading floors, where connections are faster and communication is easier.

On March 26, the fourth day of New York’s statewide lockdown, JPMorgan’s Adragna dashed off a note to his subordinates. , the bank’s global head of markets, “continues to want to push everyone to get back into the office,” Adragna said.

A had just been shattered in the investment-grade credit market, as U.S. companies raced to issue billions of dollars in bonds to bolster their financing. Adragna’s team had traded more than $3 billion of bonds that day and, the reasoning was, that wouldn’t have been possible if they’d been working from home.

“With the amount of issuance trading we can really separate ourselves and do a great job for customers by being in the office,” Adragna wrote. “Let’s attack and use this as an opportunity to differentiate ourselves both internally and externally. LET’S GO.”

JPMorgan’s spokesman disputed the notion that Rohrbaugh would push anyone to come into the office and said the markets chief has reiterated on his regular calls that anyone who doesn’t feel comfortable coming into the office doesn’t have to.

Elsewhere within the industry, middle managers have cajoled reluctant employees by suggesting that their presence is needed to comply with regulatory pressure to more closely monitor traders’ dealings. It isn’t clear which watchdogs are making such requests.

The Securities and Exchange Commission and Financial Industry Regulatory Authority haven’t been pressing banks to increase on-site staffing in recent weeks, officials said. In a public notice last month, Finra said people would need to telework and that it would let firms improvise systems “reasonably designed” to supervise them.

Working from home has received mixed reviews from bankers and traders. Some of them grimace at the technical difficulties and chafe at the awkwardness of working among family. Others are being close to loved ones, or finding other reasons to embrace it.

One senior trader at Goldman Sachs said she’s been writing emails while sitting on a yoga ball, and doing pull-ups on bathroom breaks. When she has to go back in the office, she said, she’ll miss doing burpees, a type of squat thrust, while listening to conference calls.