Withers started out representing landed gentry in late 19th century Britain, but the law firm is now part of a growing global family office sector, and functions as an adviser on the “legal and emotional” issues that go hand-in-hand with being ultra-rich.

There’s been an “explosion” in extraordinary personal wealth over the past 20 years, said Withers’ New York-based Chairman Ivan A. Sacks. As a result, “family offices have become an increasingly important cohort of the investment market.”

The businesses are often linked to private wealth banking and investment, but family office practices also are found at a number of Big Law firms that service a “who’s who” of individuals, families and philanthropies. These firms include Kirkland & Ellis, Akin Gump Strauss Hauer & Feld, Shulte Roth & Zabel, McGuireWoods, BakerHostetler, and others. 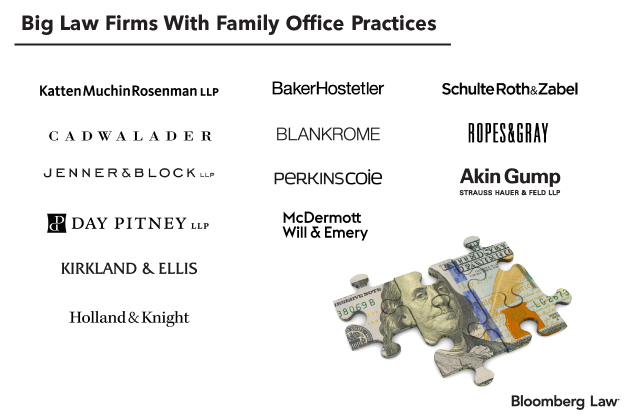 Family offices of all affiliations today oversee investments of several generations and resources that incorporate the greatest wealth transfer in history. There’s also the burgeoning class of millennial wealth more focused on legacy and what they’re doing for the planet.

As of June 25, the Bloomberg Billionaires Index shows that the wealth of the top 500 stands at $5.5 trillion and leads with Amazon’s Jeff Bezos, Microsoft’s Bill Gates, and luxury goods tycoon Bernard Arnault. It’s difficult to capture the total amount managed by family offices globally partly due to their complexity, sometimes secretive ties, and regulations they don’t have to follow. But researcher Campden Wealth estimated the figure at $4 trillion, Bloomberg Businessweek reported in May.

Far from the structure of wills and estate planning, family offices employ money managers, accountants, estate experts, and lawyers. Some also have staff to handle family tasks. A minimum of $200 million is required to set one up, and there are at least 10,000 single family offices worldwide, according to Ernst & Young.

About half were established in the past 15 years, and perhaps the best known are those tied to dynastic business families like the Morgans and Rockefellers. But the list has expanded, notably with tech billionaires, and certain geographic regions are seeing an uptick in private wealth management.

Asia is where the most activity in new family office formation is happening, Sacks said. Withers is involved in “a significant number” of the family office registrations in Singapore, where a lot of wealthy Asian families are looking to set up their offices, he said.

The most sophisticated and competitive family office market is still the U.S., Sacks added.


Families also are recognizing that with an increase in wealth comes a responsibility to manage it so that it will become multi-generational, and ideally put to use for good purposes, said William J. Kambas, a partner with the Withers’ private client and tax team in New York.

Kambas said there’s been an increase in interest in impact investing in, for example, opportunity zones, which are areas in the U.S. categorized as “economically distressed” where the government provides tax incentives to investors.

Sacks said most single family office clients have organized philanthropy work that the firm advises on.

“It’s a generational thing,” he said, noting that the second and third generations of wealth are more focused on legacy and what they’re doing for the planet.

The firm is also increasingly being tapped to help non-U.S. families set up branches of their family offices in the states, according to New York-based David Guin, head of the firm’s corporate practice in the U.S. Guin advises family offices on regulatory compliance.

He cited the tax advantages for these foreign families, but said the biggest draw is probably proximity to U.S. markets for investment opportunities.

As family offices are getting more involved in running what’s in effect their own private equity funds, they need people close to the business opportunities to negotiate deals, he said.

In addition to getting them situated to invest, Withers also helps families from outside the U.S. with family office related immigration issues. There are certain types of investor visas like EB-5 visas that foreign family offices might use to allow them to come and go to handle their business stateside, Sacks pointed out.

And even though immigration is a hot-button political issue in the U.S. right now, the nation is still “very much open for business when it comes to investor categories,” he said.

This is the latest in a series of occasional features on intriguing practice groups at major law firms.

(Updates with names on billionaire's list in paragraph 5, and adds McGuireWoods and BakerHostetler in paragraph 3. An earlier version removed incorrect language about wealth increase in paragraph 5 and updated the Top 500 billionaires to $5.5 trillion.)