The shares soared Feb. 25 as Culp took his boldest step yet to rescue the troubled behemoth, agreeing to sell GE’s bio-pharmaceutical business to his former employer, Danaher Corp., for $21.4 billion. Culp halted plans to spin off the broader health-care business as GE focuses on completing the Danaher deal by year end.

“This news meaningfully accelerates our deleveraging plan,” Culp, who ran Danaher for more than a decade until 2014, said in an interview. “You can see the tide beginning to turn where we can really focus on a little less defense, a little more offense.” 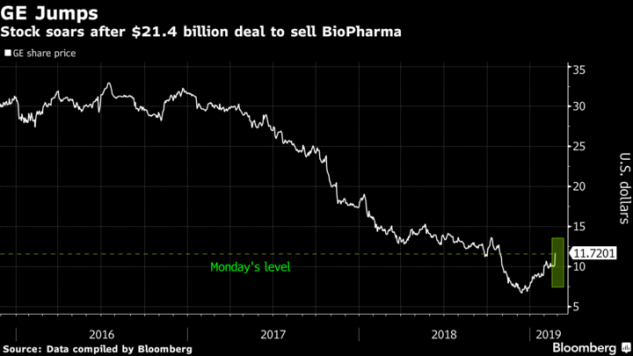 The bio-pharma sale, Culp’s biggest so far, puts an exclamation point on his bid to pull GE out of one of the worst slumps in its 127-year history. Culp, who became chief executive officer after the surprise ouster of John Flannery in October, has already announced an overhaul of the ailing power-equipment business, stepped up cost cuts and revamped a divestiture of GE’s locomotive unit to increase cash potential. 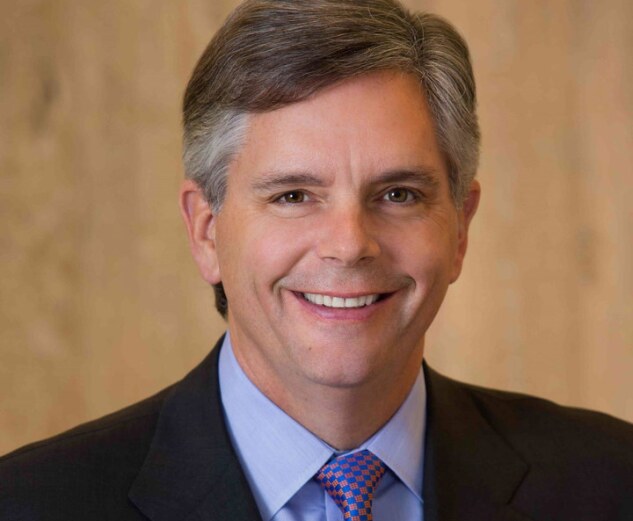 “Culp is definitively turning the page on GE’s transformation, from adequacy of liquidity to power restructuring and revitalization,” said Nicholas Heymann, an analyst with William Blair & Co.

GE jumped 6.4 percent to $10.82 at the close in New York, the highest level since Oct. 29. The shares have advanced 43 percent this year, the best performance on a Standard & Poor’s sub-index of U.S. industrial companies.

That’s a sharp turnabout from GE’s plight at the end of 2018, as a two-year stock collapse wiped out more than $200 billion in shareholder value. The Boston-based manufacturer has been reeling from mounting debt, cash shortfalls and a deep slump in the market for gas turbines.

For a look at how GE’s Danaher deal will prioritize debt reduction, click here

The cost to insure against a GE default dropped to the lowest in four months. Five-year credit-default swaps tied to the company fell 32 basis points to 97.8, according to prices compiled by CMA.

“Rarely do we see both the acquirer and the seller’s stocks react so positively on a deal announcement,” Deane Dray, an analyst at RBC Capital Markets. “This stock reaction underscores the win-win nature of the deal.”

The bio-pharma unit, which makes equipment for manufacturing biotechnology and drug therapies, represents about $3 billion of GE Healthcare’s annual sales. The deal, expected to close by the end of the year, is not subject to a financing condition or a shareholder vote, GE said in a statement. GE will receive cash proceeds of about $21 billion while also transferring certain pension liabilities to Danaher.

GE received plenty of interest in the bio-pharma operations, Culp said, and the deal with Danaher came together over the past few months. GE isn’t planning other big sales, he said.

The previously planned initial public offering of the health unit, which includes life-sciences operations as well as a sizable business making MRI machines and other equipment, had been slated as a key pillar of Culp’s turnaround, alongside the sale of GE’s stake in Baker Hughes and the divestiture of GE Transportation. GE completed the transportation deal Monday as it merged the locomotive unit with Wabtec Corp.

While GE may still unload the remaining health operations at some point, the company will now turn its attention to completing the bio-pharma sale, Culp said. The deal with Danaher will leave GE with a health-care business generating about $17 billion in annual sales.

“We’re going to focus on improving our core imaging business while we evaluate other options. It’s unlikely we would do something here in the near to medium term,” Culp said. “What today does is it allows us to explore any and every option for that core imaging business.”

GE also announced several upcoming events, including the release of its 10-K annual report this week and a presentation by Culp at a JPMorgan Chase & Co. conference March 5. GE will then hold a conference call March 14 to discuss its outlook. 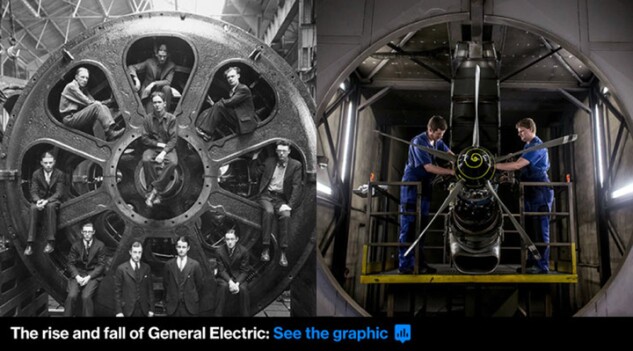 Danaher has refocused on health care after spinning out Fortive Corp. in 2016, shedding its industrial business arm. It bought Cepheid, a molecular diagnostics and medical testing company, for about $4 billion in 2016. In 2018, it acquired Integrated DNA Technologies, which makes products for gene-sequencing and editing for $2 billion.

The GE deal would be Danaher’s biggest takeover by a wide margin, however, and should fundamentally reshape its business and make it a major provider of technology and tools to biotechnology and drug companies. The unit makes everything from lab supplies to complex cell-processing technologies that are used to manufacture and test cutting-edge, boutique medicines.

Danaher will pay for the GE purchase with cash and $3 billion raised from an equity offering, plus new debt or credit.

The Washington-based company may also be able to use cash from a pending spinoff of its dental unit, which will be divested through an initial public offering to shareholders. The dental unit had sales last year of $2.81 billion. In an IPO, it could have an equity value of about $5.6 billion to $6.5 billion, said Ross Muken, an analyst with Evercore ISI.

To contact the reporter on this story: Richard Clough in New York at rclough9@bloomberg.net

To contact the editors responsible for this story: Brendan Case at bcase4@bloomberg.net Susan Warren