Freshfields Bruckhaus Deringer may be able to trace its roots back to 18th century London, but after two years of aggressively building in the U.S., its leaders would prefer not to call it a Magic Circle firm.

“I don’t think the Magic Circle is a correct reference, and, at the same time, we do more than our U.S. competitors as well,” said Freshfields global managing partner Alan Mason in an interview. “It’s difficult to put us in a particular box.”

Freshfields has long been considered among the Magic Circle, a term used to describe a handful of the most prestigious U.K. law firms. It recently achieved what few others in that group have accomplished in the U.S., a significant strategic expansion using high-profile lateral partners from stateside competitors, rather than aiming for a merger with an already established U.S. firm.

Mason and Freshfields senior partner Georgia Dawson said in a wide ranging interview with Bloomberg Law that Freshfields is looking to continue to expand in Silicon Valley, New York, and Washington, D.C., or what they dub their three “pillars.”

“We’re going through a very energetic and dynamic phase in the history of the firm,” Mason said.

U.K. firms have long sought inroads in the U.S. market by targeting stateside mergers. Clifford Chance and Roger & Wells attempted to tie up in 2000, while Allen & Overy looked to merge with O’Melveny & Myers in talks that ultimately fell through in 2019.

Freshfields is taking a different approach.

“We’re building teams rather than buying,” said Dawson, who is based in Singapore and was named the firm’s leader in September.

She said the firm favors targeted lateral hiring and internal promotions based on client feedback “rather than picking up a whole suite of areas that might not fit with what our clients need” via a merger with another firm.

The firm has since added more lateral partners in Silicon Valley, which has recently been targeted by a number of other Big Law firms founded outside California.

“Each of the people we put in the Silicon Valley office have a strong client following and are continuing to get great mandates from those clients, and then they’re able to open up those relationships for the rest of the firm,” said Dawson. “So I think it’s been a warm reception.” 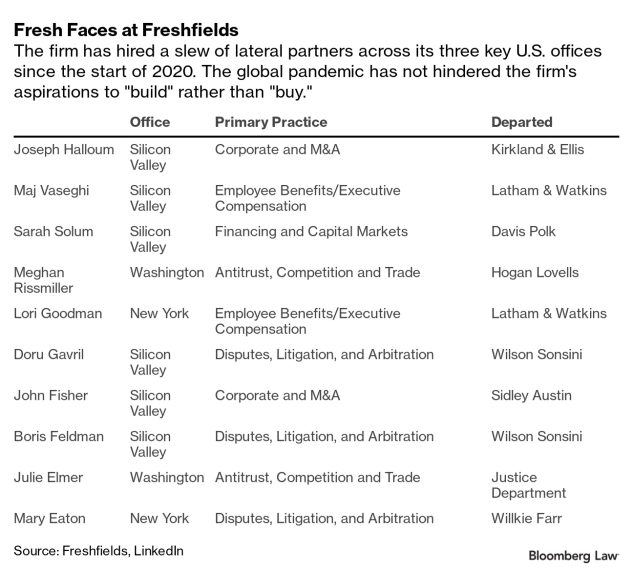 Mason said Freshfields has been working around the globe across its practices with West Coast clients for many years, whether that be on European antitrust issues, or Asia compliance issues. He gave the example of recently helping two U.S. tech companies looking to merge navigate antitrust issues in Brussels.

Now clients “don’t just call us when they have a European antitrust issue, but they call us for all of their high-end legal issues” he said.

Over the last three years, Freshfields has worked with 60% of the 1,000 largest U.S.-based companies, across its practices globally, Mason said.

“Whatever they want to do in the U.S., we can do to the same levels as any other U.S. law firms, but we can also do this global bit as well that our U.S. competitors can’t offer to the same standard,” Mason said.

The strategy has paid off, at least in the M&A market. Since 2020, Freshfields has advised on 255 deals worth $392 billion, according to Bloomberg data. In the first quarter of 2021, the firm advised on 26 deals worth $70 billion in the U.S. alone, ranking them among the top 10 firms for U.S. deals announced by volume.

Much of Freshfields’ expansion came over the last year when the global coronavirus pandemic forced law firms to shutter offices and go remote.

In March, the firm announced that it will allow its lawyers and business professionals in the U.K. to work remotely for up to 50% of the time post-pandemic. In Hong Kong, Dawson said, the firm is offering unlimited time away from the office.

“We’re given a fantastic opportunity to evolve the future of work and come up with things that make the practice of law more appealing and sustainable for all of us,” Dawson said.

Dawson, who also leads the firm’s Asia dispute practice, is among only a handful of women leaders of Big Law firms.

After Dawson was elected, she said many of the other female leaders reached out and have been a support as she navigates managing the firm’s 2,800-lawyer and legal professionals across its 28 offices worldwide. Since taking the role Dawson said she’s emphasized the importance of diversity, which she said a key piece to the firm’s growth.

Earlier this month, the firm announced the promotion of 22 new partners globally, with 50% being women. It also recently announced new five-year diversity and inclusion commitments that included having women account for at least 40% of its new partners and doubling its number of black associates by 2026. Freshfields also narrowed its gender and ethnicity pay gap, which fell from 10.4% in 2019 to 2.4% in 2020, according its 2020 U.K. pay gap report. The report also included information on disability and sexual orientation pay gaps for the first time.

Dawson and Mason noted that the firm is keen to continue its strategic expansion, filling in gaps as clients’ demands shift. They also said they aren’t simply a Magic Circle firm anymore.

“Right now, with everything we’re doing in the U.S., we’re competing with and winning clients from the top U.S. competitors and that’s an indication of how we’re doing,” Mason said.