U.K.-founded firms Freshfields Bruckhaus Deringer and Herbert Smith Freehills were the top dealmakers in Europe and the Asia-Pacific in 2021, working on a combined $348 billion worth of transactions.

“Given the pandemic wasn’t going to go away, investors had to go and get on with life and start deploying that capital,” said Neil Barlow, a mergers and acquisitions partner at Clifford Chance.

Technology and life sciences industries, as well as private equity transactions, drove M&A in Europe and the Asia-Pacific during a record-breaking $5 trillion year. The top 20 dealmaking firms in Europe worked on a total of $1.4 trillion in transactions last year.

Freshfields worked on 239 deals in Europe worth more than $241 billion, according to Bloomberg data. Herbert Smith Freehills took the top spot in the Asia-Pacific, excluding Japan, with 146 deals worth almost $107 billion, the data show. 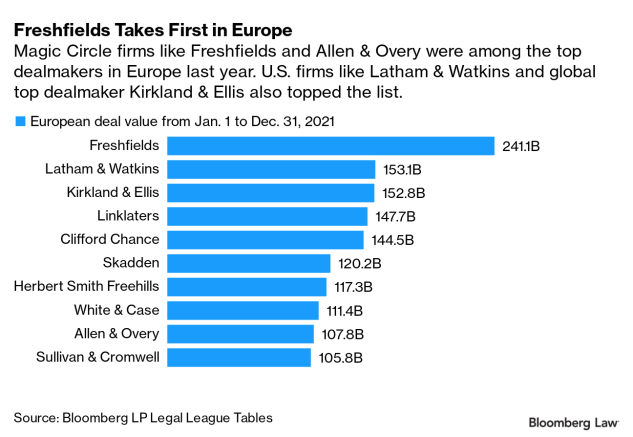 “A fair amount of it was in corporate simplification, carveouts—companies trying to have a more straightforward, perhaps more focused, investment proposition,” said Freshfields’ corporate and M&A partner Julian Long.

“It used to be that we have all these private equity funds that acquire European companies, and very rarely did we have European PE funds doing the acquiring,” said Venable LLP international tax co-chair Friedemann Thomma. “That paradigm has shifted. There’s so much cash chasing deals.”

The same factors that drove M&A activity in Europe and the U.S. also drove deals in the Asia-Pacific.

“The trends are the same because we’re all dealing with the same global issues of the pandemic accelerating a lot of change that was going ahead,” said Herbert Smith Freehills’ global head of M&A Gavin Davies.

The top 20 dealmaking firms in the region worked on a combined $1.5 trillion worth of transactions, or about a third of the total global M&A volume. 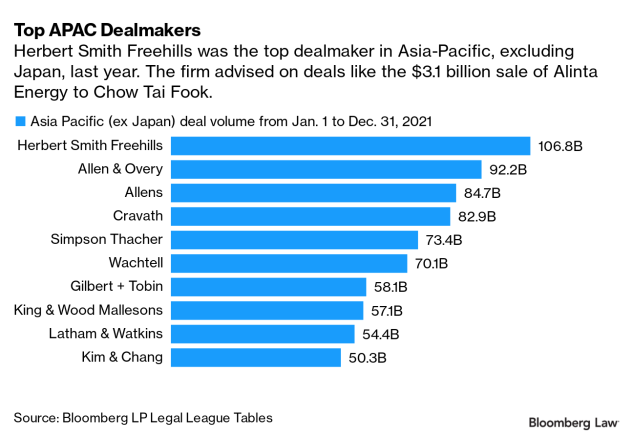 “On the corporates, they have got an imperative to build resilience, and they’ve got an imperative of doing fundamental business transformation,” he said. “Private capital—the other half of it—it’s the story that’s been running for quite a few years of record levels of dry powder, continued cheap debt. What the pandemic’s thrown in is FOMO—fear of missing out.”

Shareholder activism and private equity were major drivers of M&A activity last year in Europe and the U.S., according to Freshfields’ co-head of U.S. corporate and M&A Ethan Klingsberg.

“On a number of our deals that we worked on, the target companies had significant activist shareholders pushing them towards a sale of the company,” Klingsberg said. “There’s a number of actively managed funds that have been pushing clients using activist tactics toward more M&A activity and telling them they can’t just sit on their laurels and wait slowly for organic growth.”