Georgia Dawson is set to become the first woman to lead Freshfields, or any of London’s Magic Circle multinational law firms. She spoke with Bloomberg Law about her opportunity to bolster the industry’s diversity and inclusion efforts, continue her firm’s expansion in the U.S., and shake up some traditional law firm views following the pandemic.

Not Out-of-Step: Dawson, previously managing partner for Freshfields in Asia, said the firm’s largely seniority-based lockstep compensation system will not hinder plans to recruit and expand stateside. “The steps we have taken in the United States demonstrate that our lockstep fully supports our strategic ambitions and gives us that flexibility,” she said.

U.S. Push: Freshfields has been on a notable two-year run in the U.S. since hiring prominent dealmaker Ethan Klingsberg, who has propelled the firm toward the top of M&A league tables. The firm aims for more market share.

Roy Strom has the story.

Legal Sector Jobs Up Slightly as Overall Employment Slows
The legal sector added 3,100 jobs in September, a modest uptick after August doldrums as the economic turmoil from the coronavirus pandemic continues.

ANALYSIS: Have Legal Workers Started Bailing on Legal Jobs?
The Bureau of Labor Statistics’ monthly employment figures for September show that large numbers of workers in legal occupations are leaving unemployment behind, but this is not necessarily the good news you think it is. Most of these workers are not rejoining the ranks of the employed—not in the legal industry, anyway.

Big Law Emerges as Pipeline for Female Supreme Court Advocates
Private law firms have become a small but important pipeline for female advocates before the Supreme Court. This is particularly so as the U.S. solicitor general’s office becomes less of a launching pad for women at the high court. 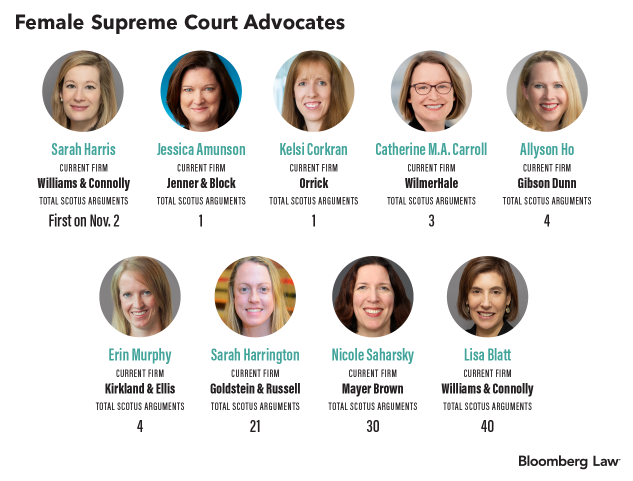 Kirkland & Ellis Leads Pack Through Q3 with $190 Billion in M&A
Kirkland & Ellis pulled ahead of competitors advising on M&A through the first three quarters of 2020, snagging close to $200 billion in deals, amid some recovery in global M&A activity that has been affected by the coronavirus pandemic.

SAP NS2 Legal Chief Wants Law Firms to Hire More Veterans
Bloomberg Law is conducting a Q&A series highlighting some of the legal industry’s most important relationships: the often fruitful but sometimes complicated connections between general counsel and their outside law firms. We’re talking with general counsel across industries about how they select outside lawyers and handle issues like billing, fees, and tracking performance.

Lewis Brisbois Sued for Role in Dairy Manure Venture
A Slovakian financial advisory company is suing big law firm Lewis Brisbois Bisgaard & Smith and one of its partners in a California court for relating to its representation of the company in a joint venture in 2017.

Former EPA Top Lawyer Joins Hunton Andrews Kurth
In today’s column, the recently hired top lawyer at a California-based patent licensing firm agreed to pay $25,000 to settle SEC allegations stemming from actions she allegedly took while at her prior employer; U.K.-based law firms are seeing premiums prices spike for their professional indemnity insurance; California’s two-day online bar exam looks set to go on as scheduled starting today despite last-minute efforts to get it canceled or altered; Judge Amy Coney Barrett’s Supreme Court nomination shindig at the White House last month turned out to be a “spigot” of Covid-19 infections.

Ten Keys to Getting the Most Out of Your Moot Court
Whether in a trial or appellate court, attorneys need to prep diligently for arguments with effective moot court sessions. Washington, D.C., appellate attorneys Andrew Nichols, shareholder at Charis Lex, and Steffen Johnson, partner at Wilson Sonsini, say keys include staying in role and holding multiple sessions.

Crafting a Federal Privacy Law to Benefit Small Businesses
A federal privacy law would benefit small business by providing a predictable legal landscape, preparing companies for more business opportunities, and enhancing consumer trust, says Paula Bruening, founder of Casentino Strategies LLC and former Intel global director of privacy. It should be stru
ctured to adapt to the needs and resources of smaller organizations.

Alexa users, you can add Bloomberg Law’s top stories of the day to your Flash Briefing or tell Alexa to “Play Bloomberg Law news.”

To contact the reporter on this story: in Washington at pchile@bloomberglaw.com