Taft Stettinius & Hollister is a longtime legal advisor to the Cincinnati Bengals, who take the field in Sunday's Super Bowl.
Jevone Moore/Icon Sportswire via Getty Images

W. Stuart Dornette, co-chair of the litigation practice at Taft Stettinius & Hollister, flew to Los Angeles from Cincinnati on Thursday to take in Super Bowl LVI.

But Dornette didn’t fly commercial from Cincinnati. He and several law firm colleagues took one of a few flights chartered by the National Football League’s Cincinnati Bengals, who are set to play the Los Angeles Rams in Sunday’s big game.

“They offered every employee a couple of tickets, transportation, and lodging,” said Dornette, a veteran trial lawyer who called the occasion a memorable moment in the 45 years he’s been a key legal adviser to the Bengals. Another Taft lawyer did the incorporation documents for the team in 1967, Dornette said, a year before the club took the field.

The franchise is owned by Mike Brown, a Harvard Law School graduate who inherited the franchise from his father, Hall of Fame football coach Paul Brown. Mike Brown’s daughter, Katherine Blackburn, is an executive vice president for the Bengals who started her career as a corporate associate at Taft, where she met her husband, fellow lawyer and current Bengals vice president Troy Blackburn.

Dornette and his wife were in Miami some 33 years ago when the Bengals made their last Super Bowl appearance, a 20-16 loss to the San Francisco 49ers. The team, now led by star quarterback Joe Burrow, are considered underdogs as they prepare to take on the Rams in the team’s home stadium.

Cincinnati, unlike other NFL teams, does not list a general counsel among its front office staff on the team’s website. 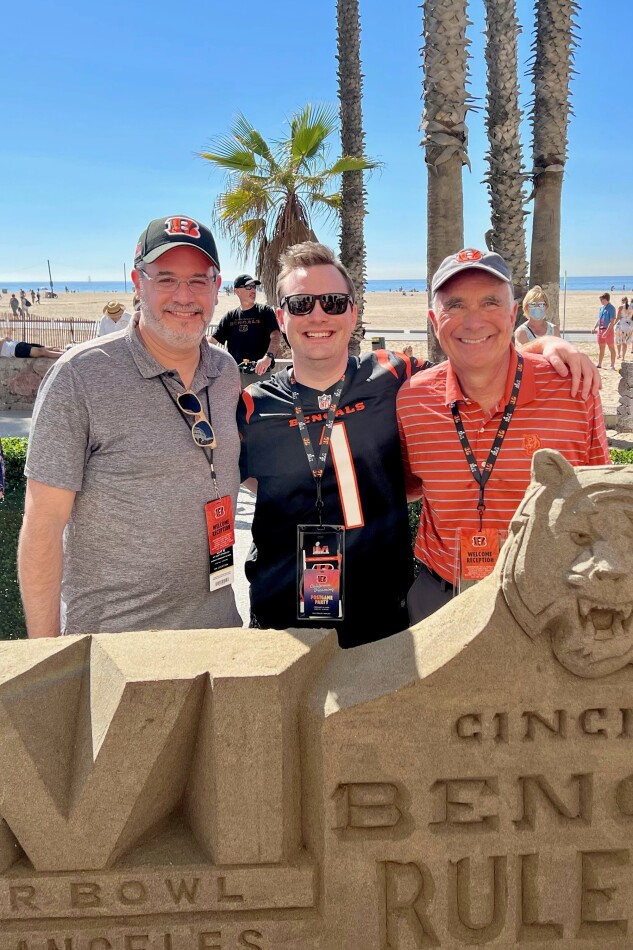 “We do a lot of legal work for the team in different areas,” Dornette said, when asked if he essentially serves in as the Bengals’ top lawyer.

That includes doing sponsorship agreements, workers’ compensation and pension matters, as well as contracts with suppliers and customers, he said. Player contracts are governed by the NFL’s collective bargaining agreement, lessening the need for outside counsel, Dornette said. He handled construction, development, financing, and leasing work for Paul Brown Stadium, the Bengals’ home field since 2000.

Taft, a Cincinnati-based firm that in recent years has expanded throughout the Midwest, is closing in on cracking the top 100 law firms in the U.S. by gross revenue. Taft acquired Minneapolis-based Briggs and Morgan in 2020, a move that brought the firm sports clients like Major League Baseball’s Minnesota Twins and the NFL’s Minnesota Vikings, Dornette said.

“We have a fairly robust group of folks doing sports stuff,” said Dornette. Other Taft sporting clients include the NFL’s Indianapolis Colts, as well as the National Basketball Association’s Cleveland Cavaliers.

Dornette said he and the other Taft folks headed to the Super Bowl bought their tickets through the Bengals. The Taft partner is optimistic about the teams’ chances in the big game. Both teams lie at somewhat opposite ends of the NFL spectrum, in terms of the size of their home cities and the means through which they built their championship-level rosters.

Todd Davis, a longtime vice president of legal affairs for the Rams, didn’t respond to a request for comment about his team’s legal advisers. Nor did Marlene Nations, a former Dentons real estate partner who advised the franchise on the January 2016 deal that permitted the Rams to leave St. Louis and return to the Los Angeles area. The Rams had previously moved to St. Louis from Anaheim, Calif., in 1995.

Nations is now general counsel for Hollywood Park Management Co. LLC, an Inglewood, Calif.-based development whose roster of properties includes SoFi Stadium, a $5.5 billion edifice that opened in 2020 and is the site of Sunday’s Super Bowl.