Florida was supposed to be the solution: a virus-fighting success story that could relaunch stalled professional sports and host the relocated Republican National Convention.

Instead, the coronavirus wildfire is raging just as National Basketball Association games are supposed to start and the GOP puts the final touches on its party.

Florida has set a new state record in deaths and a national mark for the biggest daily increase in cases, all in a place that Governor -- a Republican ally of President -- had touted in May as a Covid-19 haven. Representative , a Democrat from the state and a former U.S. secretary of Health and Human Services, said all plans should be revisited.

“Everyone should reassess,” Shalala said in an interview Monday from Miami, adding that the state should consider a three-week shutdown. “We’re in a very difficult situation at the moment, and unless we step back and reset our strategy, a lot more people are going to die.” 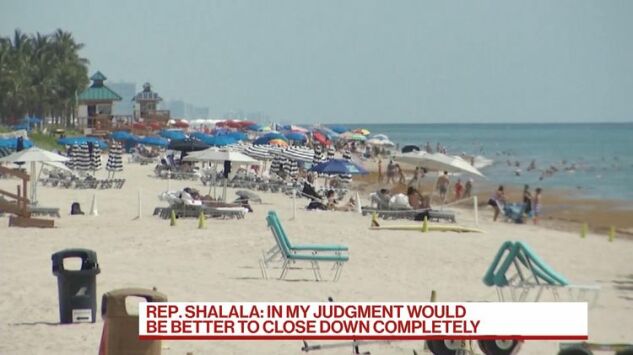 WATCH: Representative Donna Shalala, a Democrat from Florida and former secretary for Health and Human Resources, discusses how Florida has been impacted by the coronavirus pandemic.
Bloomberg: Balance of Power.” (Source: Bloomberg)

Florida reported 15,300 new Covid-19 cases on Sunday, the most any state has recorded. On Tuesday, it tallied a cumulative 291,629 infections since the pandemic began. Deaths have also been rising, with a peak of 132 fatalities reported in a single day on Tuesday.

Lilian Abbo, an infectious-disease specialist at the University of Miami Health System, said Monday the city had become the new epicenter of Covid-19, comparing it with Wuhan, China, some five months earlier.

“Every health-care worker is working nonstop,” Abbo said during a conference call with Miami-Dade Mayor Carlos Gimenez. “Our workforce is also falling sick as they’re getting infected as well in the community, and many people are getting infected around us.” 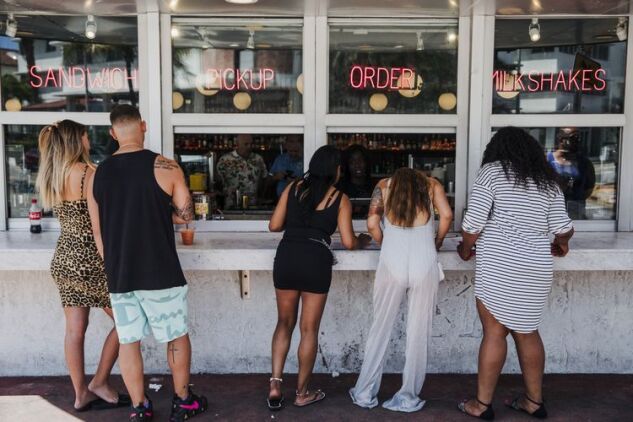 Customers order food from a take out window in Miami Beach on March 20.
Photographer: Scott McIntyre/Bloomberg

Unlike earlier in the pandemic, Covid-19 is now also infecting and hospitalizing large numbers of Floridians away from the state’s largest metropolitan area. In Orlando, home of the Walt Disney World complex that’s hosting the NBA, cumulative cases are now about 14 times what they were on May 4, when Florida emerged from its Covid-19 lockdown.

Jacksonville, host of the Republican convention, had just 1,011 confirmed cases on May 4. The convention was officially relocated there June 11, when it had 1,770 cases. As of Tuesday, the number of cases had climbed to 12,548, and the area had 525 Covid-19 patients in hospitals.

Trump in June upended plans to hold the convention in Charlotte, North Carolina, after the governor said the RNC would have to institute social distancing and mandatory face masks. Official business will still be held in Charlotte, but the nomination will be moved to Jacksonville Aug. 24-27.

Customers order food from a take out window in Miami Beach on March 20.
Photographer: Scott McIntyre/Bloomberg

Republican leaders have been hedging about whether they will attend. Senate Majority Leader Mitch McConnell told reporters Thursday the convention was “a challenging situation.”

“We’ll have to wait and see how things look in late August and determine whether or not you can safely convene that many people,” McConnell told reporters in Kentucky.

Six senators aren’t planning on going -- Lamar Alexander, Chuck Grassley, and Pat Roberts, who are all over 80, as well as Susan Collins, Lisa Murkowski and Mitt Romney. Senator Cindy Hyde-Smith’s office told Bloomberg Tuesday she will “make her decision closer to the convention in late August based, in part, on the recommendations from public health officials.”

RNC Spokesperson Mike Reed said the party remains committed to putting on a safe convention that complies with health regulations. “The convention is still a month and a half away, so there is time to adjust,” he said in an email.

David Caro, an emergency medicine physician and medical disaster director at UF Health Jacksonville, said he worried about conserving personal protective equipment and managing the strain on health-care workers. He said the virus may peak in Jacksonville before the convention, but the influx of visitors would present new challenges.

“We’re really starting to stretch our capacity,” he said. 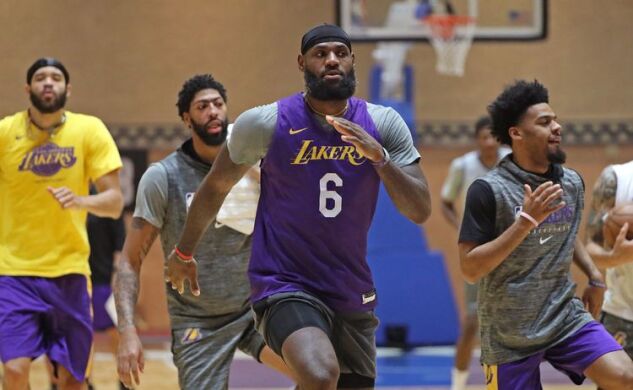 LeBron James and the Los Angeles Lakers warm up during practice as part of the NBA Restart 2020 in Orlando on July 13.
Photographer: Joe Murphy/NBAE via Getty Images

The sports leagues began welcoming players to their so-called “bubbles” at Disney World in Orlando this month, but it hasn’t gone as planned. Major League Soccer, which is staging a month-long tournament, has had to cancel games due to positive tests and two teams, FC Dallas and Nashville SC, have withdrawn.

Two NBA players have returned positive tests, according to a statement from the league Monday.

Other players such as Houston Rockets’ star Russell Westbrook have been unable to travel to Orlando due to testing positive. Portland Trail Blazers’ player Trevor Ariza, the Washington Wizards’ Davis Bertans and the Los Angeles Lakers’ Avery Bradley have opted out of playing for health or personal reasons.

ESPN reported that the NBA was spending more than $150 million to finish its season on the grounds of the theme park.

By contrast, World Team Tennis -- which also considered hosting its matches in Orlando -- began its season at the Greenbrier Resort in White Sulphur Springs, West Virginia, on Sunday with limited crowds.

“I think everyone is very happy this year that we’re not in a city,” said Chief Executive Officer Carlos Silva. “I’m happy we didn’t go to Orlando or Austin.”

Walt Disney Co. also reopened its Magic Kingdom and Animal Kingdom theme parks in Florida over the weekend following a four-month shutdown. Its Epcot and Disney’s Hollywood Studios parks are slated to open on Wednesday.

Disney hasn’t changed its plans, but is working under a “flexible operating environment,” suggesting that could change quickly. The company has imposed mask requirements, temperature checks and more intense cleaning. It also has a new reservation system to control crowds.

“We’ve got a new way to operate in a new world,” Josh D’Amaro, the chairman of Disney’s theme parks business, said Saturday in an interview with Bloomberg Television. 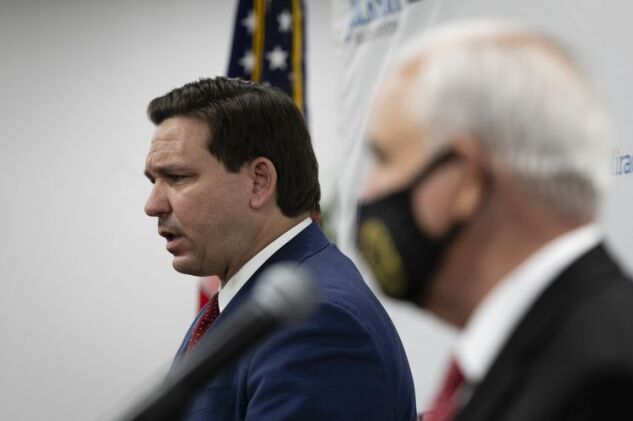 Meanwhile, the state has failed to offer new restrictions to stem the virus’s spread, with the exception of banning on-premises bar drinking June 26. DeSantis has mostly deferred to local governments, including Miami-Dade, which has mandated masks and reclosed indoor dining at restaurants.

Despite the surging case numbers, hospitalizations and deaths, DeSantis told reporters Monday that positivity rates may have “stabilized.” DeSantis has said he focuses on positivity rates, because they account for an increase in testing.

Indeed, rates of Floridians testing positive for the first time were under 13% for four straight days, after hitting an all-time high of 18.4% on July 8. But new data released Tuesday, after DeSantis’s remark, showed the rate jumped back to 15%. The rates remain far above the 4.4% weekly average when Florida started reopening its economy May 4.

Shalala, the congresswoman, said the state is “not in control.”

“I’m very worried that we think we can fix this with an incremental strategy,” she said. “The problem is that it should have been approached from a national standpoint and from a state standpoint. And the governor was quite weak, he followed the president.”

Ali Mokdad, professor of health metrics sciences at the Institute for Health Metrics and Evaluation at the University of Washington, said record high cases were a sign that new policy steps were called for -- regardless of positivity rates.

“As cases increase, we will see more hospitalizations and unfortunately more deaths,” Mokdad said. The record in cases is a “a call for action and a dangerous sign.”