fired Chief Executive Officer and two other senior executives after a board review set up in the wake of a federal corruption scandal found they violated the company’s policies and its code of conduct.

The firings are the company’s strongest move yet in response to an alleged conspiracy involving a former unit, Energy Harbor Corp. In July, federal officials arrested the speaker of the Ohio House of Representatives and four political associates were indicted on federal racketeering charges involving almost $61 million in bribes tied to a more than $1 billion bailout of two nuclear plants owned by Energy Harbor. Two of the associates, including a lobbyist for a FirstEnergy subsidiary, pleaded guilty Thursday, according to the U.S. attorney’s office for the southern district of Ohio. 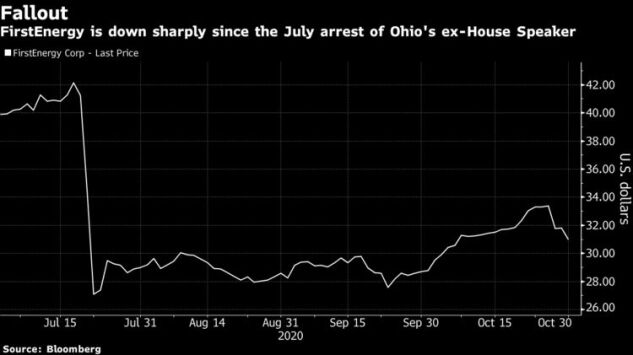 FirstEnergy no longer owns the reactors and wasn’t named in the affidavit filed in July by federal authorities. In the charging document, prosecutors said an Ohio-based utility owner -- identified only as “Company A” -- steered almost $61 million over three years to the Ohio house speaker in exchange for supporting a bill passed in 2019 creating the nuclear subsidies. The company was widely believed to be FirstEnergy.

“The guilty pleas and the executive turnover at FE certainly add credence to the allegations,” Height Securities analyst Josh Price said in research note. They also increase “risk for companies and policymakers not explicitly mentioned in the affidavit,” he said.

FirstEnergy had sought to itself from the scandal. After the speaker’s arrest, Jones told investors that the company had acted properly and that it didn’t have control over the decisions made by its former subsidiary. Jones said the company was in talks with U.S. Justice Department lawyers after receiving subpoenas related to the probe.

Within days of it being enacted, environmentalists and others were gathering signatures in support of a referendum to overturn it. The firm described as “Company A” worked closely with supporters of the law to defeat the repeal effort, prosecutors said. It devolved into a political mud fight, including a television ad, contending that overturning the law would give China control over Ohio’s power grid.

“It was the CEO of the company,” the lobbyist said, according to an filed by authorities.

Jones was not named in the affidavit. Efforts to contact him were unsuccessful. 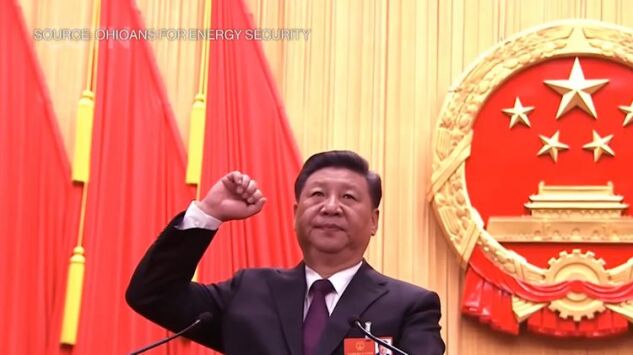 A television commercial produced by a group called the Ohioans for Energy Security warns that China is “quietly invading” the state’s electric grid.
(Source: Bloomberg)

Last month, Ohio’s attorney general against FirstEnergy and Energy Harbor, accusing them of “corrupt activity” in connection with the nuclear bailout law. That complaint alleged that the companies formed an “unholy alliance” with lawmakers to pass a bailout in 2019 and moved money through nonprofit organizations to subvert Ohio’s campaign finance laws.

FirstEnergy didn’t give any more details in Thursday’s statement on the policies that were violated, only saying that they were uncovered as part of an independent board review into the investigations.

“It’s a disappointing development, and one that raises questions as to what exactly the conduct was that led to the board’s decision,” said , a utility analyst at Glenrock Associates.

“Clearly there was enough of an issue to cause this change in leadership,” Patterson said in a phone interview. “The question is, what was it and are there any significant ramifications that may unfold as a result of it.”

FirstEnergy on Thursday also named board member executive director. In that role, he remains an independent board member and isn’t part of the management team.

To contact the reporters on this story:
in Los Angeles at beckhouse@bloomberg.net;
in San Francisco at mchediak@bloomberg.net