Former President jeopardized some of the nation’s most classified defense and intelligence material -- from intercepted foreign communications to intelligence gathered by spies -- by stashing it improperly at his Mar-a-Lago estate, according to an unsealed FBI affidavit.

The heavily redacted document, which is 38 pages including attachments, was filed Friday in federal court in West Palm Beach, Florida, after a magistrate judge ruled the public should be allowed to see at least parts of it due to the in the search for classified documents at Trump’s home.

An unnamed Federal Bureau of Investigation agent describes in the document how the investigation was prompted by the discovery of hundreds of pages of “highly classified” documents in 15 boxes recovered by the National Archives and Records Administration earlier this year, including 25 records marked “top secret.”

According to the affidavit, 14 of the 15 boxes recovered on Jan. 18 included classified documents, leading officials to conclude that the former president could possess additional such materials. Some of the records contained markings indicating they contained intercepts of foreign communications, intelligence gained from human sources, and data collected under the Foreign Intelligence Surveillance Act, a 1978 law that set up a secret court to primarily approve spying on foreign nationals within the US. 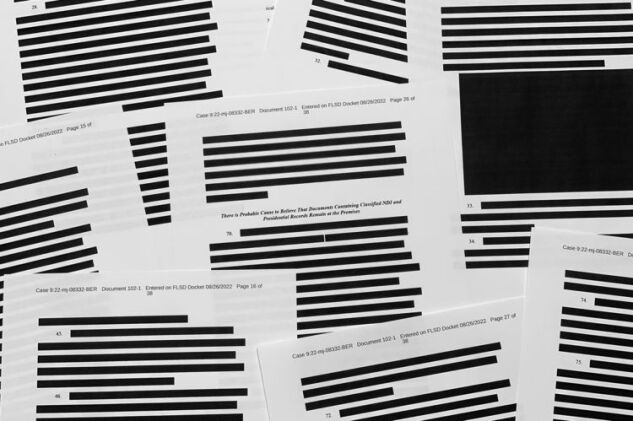 Pages from the affidavit by the FBI in support of obtaining a search warrant for former President Donald Trump’s Mar-a-Lago estate.
Photographer: Jon Elswick/AP Photo

Those boxes initially retrieved from Trump also included information barred from release to foreign nationals, and information that can be disseminated only with the approval of its originator, according to the affidavit.

The FBI affidavit was used to convince US Magistrate Judge Bruce Reinhart to approve a search of Trump’s Florida home on Aug. 8, during which FBI agents retrieved 11 additional sets of classified documents in about 20 more boxes. The unprecedented search of the former president’s residence has prompted and fueled political divisions ahead of the November midterm elections and Trump’s possible entrance into the 2024 presidential race.

Of the 32 non-exhibit pages of the affidavit, 24 included either complete, full redactions of paragraphs, or partial ones. A memo filed by the DOJ explaining the redactions referred to “multiple civilian witnesses whose information was included throughout the affidavit and contributed to the finding of probable cause.” Authorities also argued in favor of sealing the document because the FBI has “not yet identified all potential criminal confederates nor located all evidence.”

“It is not surprising that a huge amount of information is blacked out,” Rebecca Roiphe, a law professor at New York Law School, said on Bloomberg Television’s “Balance of Power With David Westin.” The document “is not all that much more than what we knew already from the search warrant.”

Trump said in a posting on his Truth Social platform that there was “nothing mentioned on ‘Nuclear”’ in the heavily redacted affidavit, a reference to a report in the Washington Post that the material included documents related to nuclear weapons. Trump called it “a total public relations subterfuge” by the FBI and Justice Department. He also repeated his calls for Reinhart to recuse himself.

The portions of the affidavit that were made public, however, show what sparked alarm at the DOJ and FBI. The investigation is seeking answers as to how documents with classified markings were removed from the White House and stored in areas not authorized to hold such materials -- including Trump’s bedroom, closet, office and storage areas. Authorities are also looking at who was responsible and whether there were additional sensitive records at Mar-a-Lago.

Jeffrey Bellin, a law professor at William & Mary, said the filing “spells out why the officer believed evidence of an offense would be found at the location.” He added, “In light of the information in this affidavit, it is not surprising that the judge concluded that there was probable cause, and so authorized the search.”

Included with the affidavit was a May 25 letter from Trump attorney Evan Corcoran, who asserted that the president “has absolute authority to declassify documents” and that “presidential actions involving classified documents are not subject to criminal sanction.”

Corcoran also warned that “public trust in the government is low” and he said “every effort” should be made to ensure that DOJ’s actions “do not involve politics.”

According to the affidavit, NARA’s White House liaison division director said that a preliminary review of the 15 boxes contained “a lot of classified records,” in addition to newspapers, magazines and presidential records. The “most significant concern” was that “highly classified records were unfoldered” and “intermixed” with other records, according to the affidavit.

Between pages of extensive redactions, the affidavit describes NARA’s effort to recover records from Trump throughout 2021. The filing says NARA on May 6 of that year made an initial request for the missing records and “continued to make requests until approximately late December 2021 when NARA was informed that 12 boxes were found and “ready for retrieval.”

On June 8, a DOJ lawyer -- who is not identified -- notified a Trump lawyer by letter that Mar-a-Lago was “not authorized to store classified information” and asked that a storage room be “secured” and “preserved” until further notice.

Congressional intelligence committees have requested a damage assessment of the storage of sensitive information at Trump’s home. “It appears, based on the affidavit unsealed this morning, that among the improperly handled documents at Mar-a-Lago were some of our most sensitive intelligence -- which is one reason the Senate Intelligence Committee has requested, on a bipartisan basis, a damage assessment of any national security threat posed by the mishandling of this information,” Senate Intelligence Committee Chairman , a Virginia Democrat, said in a statement Friday.

White House Press Secretary regularly declined to comment in a briefing Friday, before President Joe Biden himself weighed in.

Biden, speaking briefly with reporters outside before boarding his helicopter, mocked the notion that Trump can broadly declassify tranches of documents on a whim. At one point, Biden waved his hands to pantomime magically declassifying things. “C’mon,” he added.

Trump spokesman Taylor Budowich said what was unredacted supports the former president’s position that the search was politically motivated.

“The release of a heavily redacted, overtly political affidavit only proves that the Biden administration is desperate to cover up their unprecedented, unnecessary, and un-American raid against President Donald J. Trump,” Budowich said on Twitter.

Earlier this week, Trump in Florida seeking to have a “special master” appointed to review materials that were seized during the search.