“Non-competes on steroids.” That’s what one scholar calls no-hire and no-poach agreements among employers like those in Silicon Valley that recently settled for hundreds of millions of dollars.

Now similar deals, that stifle competition and suppress wages, are rapidly catching the attention of the Department of Justice and class action attorneys.

These “gentlemen’s agreements” can add up to millions of dollars in lower wages for thousands of both highly skilled and unskilled workers across all industries.

And that leads to multimillion-dollar antitrust settlements with the companies involved.

A pair of related cases involving workers at Apple, Google and other Silicon Valley tech companies settled recently for $435 million and $169 million.

They garnered two of the biggest payouts in class counsel attorneys’ fees and costs in federal courts in that state in the last eight years, according to Bloomberg Law’s Class Action Settlement Tracker. 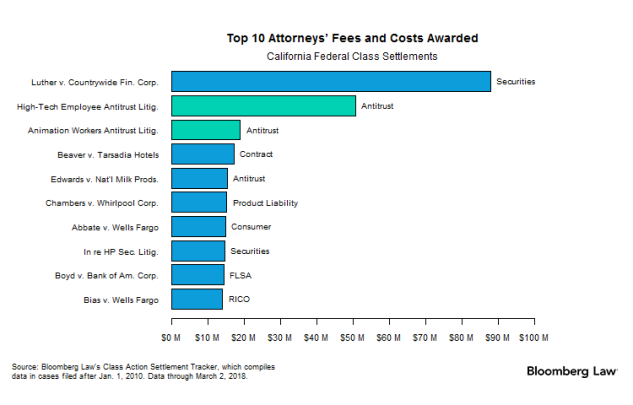 That blueprint will make the next round of cases easier, said Orly Lobel, who coined the “steroids” phrase and is a professor at University of San Diego School of Law who specializes in employment law.

Another significant factor contributing to the expected rise of these suits is a signal from the Trump administration that it will continue to criminally prosecute conspiracies among employers to suppress wages.

As soon as the DOJ announces a criminal investigation, you can count on a follow-on class action filed by attorneys representing the workers affected, defense attorney Timothy F. Haley told Bloomberg Law. Haley is senior counsel at Seyfarth Shaw LLP in Chicago.

These claims represent a new frontier for antitrust law.

The normal context for an antitrust violation is a conspiracy among sellers or manufacturers to fix the price of their fungible product, Haley said. That’s called a buyer-side conspiracy.

Getting fewer offers over time has a direct effect on workers’ salary levels, but also affects the entire market, Lobel said. “There’s a downward pressure when there is less mobility.”

Salaries grow exponentially when there is “more of a tournament, more repeat competition over not just one person, but everybody’s talent,” she said.

Lobel has written two books, “Talent Wants to Be Free” and “You Don’t Own Me,” about the ability of workers to move freely. This mobility is good not only for the employees, but also for businesses, innovation, and economic growth, she argues.

One particularly high-profile no-poach conspiracy that came to light after a DOJ investigation involved the high-tech workers in California, Harvey said. It was the first government enforcement effort in this area, he said.

The DOJ discovered an agreement among seven tech companies in Silicon Valley not to recruit each other’s employees. The initial economic analysis of the wages lost by software engineers was $3 billion, which could be tripled to a liability of $9 billion. 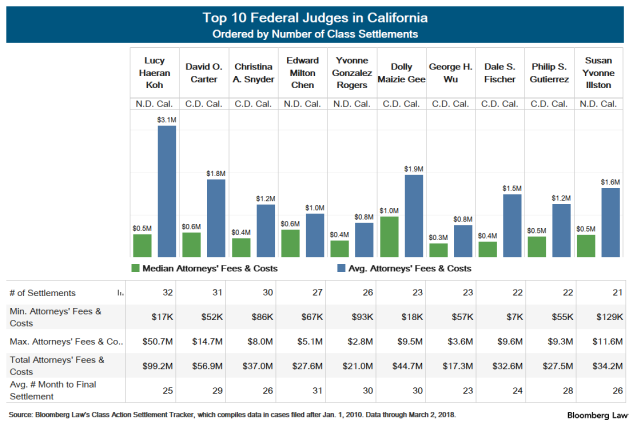 Judge Lucy Koh, who oversaw the consolidated cases in the U.S. District Court for the Northern District of California, initially denied class certification. She later granted certification after the workers provided more evidence.

Koh, who has approved more class settlements in recent years than any other federal judge in California according to Bloomberg Law’s Class Action Settlement Tracker, also signed off on a $169 million settlement in 2017 in a related case brought by animators against companies including DreamWorks and Disney.

In October 2016, DOJ and the Federal Trade Commission announced that these so-called “naked” agreements among employers to suppress wages would be considered per se violations of the antitrust laws and prosecuted criminally.

A DOJ official said in September the Trump administration would continue prosecuting offenders under the Obama-era policy. And in January, Makan Delrahim, the assistant attorney general of the antitrust division, said the DOJ is actively reviewing potential antitrust violations.

As the Silicon Valley cases illustrate, these suits have the potential to result in massive settlements and payouts to class counsel.

The payouts for class counsel fees and costs in the high-tech worker and animator cases—$51 million and $19 million respectively—were so large they were many multiples of the median fees in all categories of federal suits settled in California over the past eight years, according to Bloomberg Law’s settlement data. 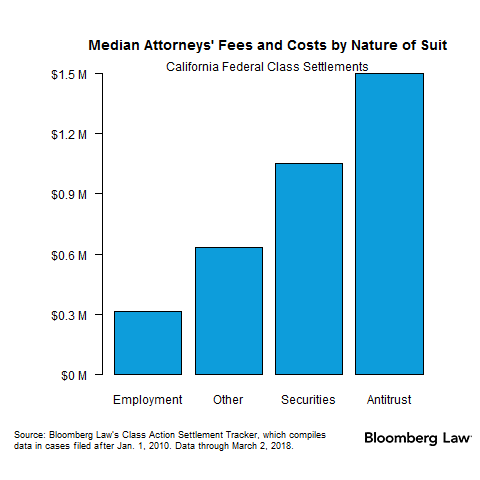 They were also higher than the maximum fees and costs awarded in all other employment and antitrust settlements, according to the data.

In fact, the only higher award of fees and costs paid out since 2011 in federal courts in California, $88 million, came in an investor suit against Countrywide Financial Corp. after the subprime mortgage market collapsed in a deal valued at $500 million. 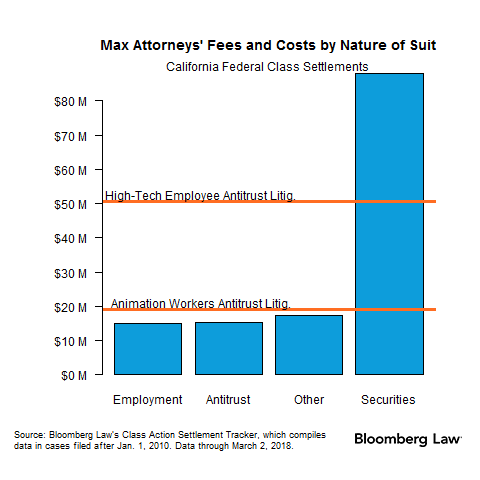 As in all class actions, one reason for the large settlement amounts is the number of employees involved. The Silicon Valley software engineer class included over 60,000 employees, for example. But the antitrust laws also allow plaintiffs to greatly increase their potential damages.

Plaintiffs alleging anticompetitive conduct under Section 1 of the Sherman Act may seek an award of triple their damages.

And each employer is joint-and-severally liable for the actions of all the other defendants. That means one defendant may settle early for a low amount. The ones that hang on and fight it out are liable not just to their own employees but to the entire market if they are unsuccessful.

In a suit alleging Detroit hospitals conspired to suppress nurse wages, the final company to settle paid almost as much as all the others combined, Haley said. The class was estimated to include over 20,000 employees and settled for a total of $90 million in 2016.

A case alleging Duke and University of North Carolina hospitals agreed not to hire each other’s faculty was certified recently. UNC settled early, but the class certified against Duke includes all 5,500 faculty members of both schools, Harvey said.

These cases are going to turn on class certification, Haley said.

“In the civil context, nobody has beaten this from the employer side on either a motion to dismiss or summary judgment,” he said. “They’ve won or lost based on whether they are able to beat class certification. In the civil cases, that’s going to be where the rubber meets the road.”

The real battleground is on antitrust impact and whether the plaintiffs can show that all members of the class were adversely affected by the alleged conspiracy, Haley said.

Not all cases that have made it to the certification stage have been wins for plaintiffs.

The U.S. Court of Appeals for the Third Circuit upheld the district court’s denial of class certification in a no-hire case involving workers in the ink printing industry in a 2004 unpublished opinion.

And Haley was lead counsel in another hospital case involving the alleged suppression of nurses’ wages where class certification was defeated in 2009.

The DOJ’s interest in continuing criminal investigations and prosecutions is bringing more attention to these agreements.

After the government investigates, the class action attorneys come in, Haley, the defense lawyer, said. “They let Justice do the work for them in terms of digging up the facts and outlining what they found, and then they file their class action,” he said.

But plaintiffs’ attorney Harvey pushed back against that cynical view. 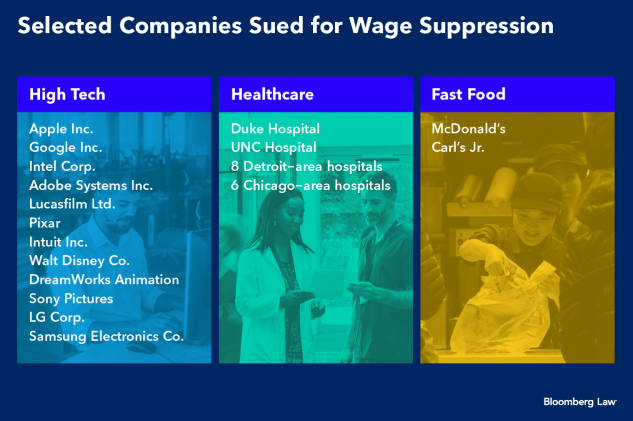 “That’s generally where civil plaintiffs and the kind of work that we do comes in,” Harvey said. “We also have to establish liability, figure out how the misconduct hurt people, who was hurt, measure that harm, and try to get compensation to those victims.”

Some class actions come about not from a DOJ investigation, but because employees themselves find out about the wage suppression policies.

That was the situation in the litigation involving Duke and the University of North Carolina. A doctor on the Duke faculty applied for a job at UNC and was told in an email that she couldn’t be hired because of an agreement between the schools, Harvey said.

That email formed the basis of the complaint, Harvey, who represents the class in that case, said.

That shows the “complete lack of awareness among HR people that antitrust laws apply in the employment marketplace,” defense attorney Haley said. Companies should educate everyone involved in the hiring process on antitrust compliance, he said.

Government and litigation action in this area has been a long time coming, Harvey said.

“One of the most pressing public policy issues facing the country is stagnant wage growth and income inequality,” and employer efforts to suppress competition are one of the causes, he said.

Antitrust laws exist not just to guarantee that sellers can’t price-fix products in the marketplace, but also to protect workers and their ability to get a competitive wage for their work, he said.

No-hire and no-poach agreements are hard to detect, which is part of why there’s a limit to how much is known about wage suppression efforts, professor Lobel said.

These anticompetitive practices aren’t limited to industries with skilled workers. Two lawsuits, filed in 2017 against McDonald’s and Carl’s Jr.’s parent company, CKE Restaurants Holdings, allege franchisees are prohibited from hiring workers away from one another. The companies employ a total of 235,000 and 23,000 people, respectively.

Democratic Sens. Cory Booker of New Jersey and Elizabeth Warren of Massachusetts introduced a bill March 1 to crack down on “restrictive employment agreements” among companies.

“We used to see non-competes more regularly with the skilled workforce,” Lobel said. “But it has expanded downward to the service industry and low-skilled workers.”

There’s very little justification with low-wage workers when no real trade secrets are involved and little has been invested in their human capital, she said.

To contact the reporter on this story: Perry Cooper in Washington, D.C. at pcooper@bloomberglaw.com

To contact the editor responsible for this story: Steven Patrick at spatrick@bloomberglaw.com