Senate Democrats are calling for Supreme Court nominee to pledge to recuse herself from future cases related to the 2020 election, after President said the court might decide the outcome and he expects her to break a tie.

While there is virtually nothing Congress can do to force a Supreme Court justice to recuse herself from any case, the issue is becoming a major flash point in Barrett’s confirmation battle, serving as a litmus test for her independence from Trump. 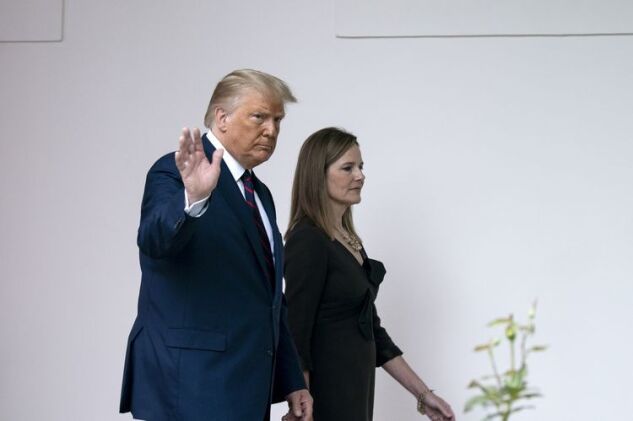 Donald Trump walks with Amy Coney Barrett during an announcement ceremony at the White House in Washington, D.C. on Sept. 26.
Photographer: Stefani Reynolds/Bloomberg

Democrats on the Senate Judiciary Committee plan to ask Barrett during her confirmation hearings whether she would refuse to take part in matters related to the election if she’s confirmed in time, according to a Senate Democratic aide speaking on condition of anonymity.

Senator of Illinois, a senior Democrat on the Judiciary panel, said Trump’s comments about her potentially tie-breaking vote should prompt her to avoid any case related to the election.

“She should step forward and say that she would recuse herself from any election contest involving this president,” Durbin said Sunday on ABC News’ “This Week.”

Trump has demanded loyalty from people he appoints to positions in government. He fired after the then-FBI director wouldn’t pledge his loyalty to the president and he turned on Attorney General after he recused himself from the Russia investigation because of his role on Trump’s 2016 campaign.

A similar commitment from Barrett may anger the president.

Senator , a Delaware Democrat who also sits on Judiciary, believes Barrett should recuse herself from election matters if she’s confirmed, his spokesman Sean Coit said Monday.

Senate Judiciary Committee Chairman disagreed, arguing Barrett is no more conflicted than the other eight justices currently on the bench.

“She doesn’t have a legal conflict,” Graham, a South Carolina Republican, told reporters at the Capitol.

In a written questionnaire submitted to the Judiciary panel, Barrett did not say if she would recuse herself from cases involving the election.

She said she would work to “identify and avoid potential conflicts” by sitting out cases in which her husband and sister, both lawyers, have been involved. The judge said the same goes for matters related to the University of Notre Dame, where she taught law before being confirmed to the Seventh Circuit Court of Appeals. Barrett also pledged not to participate in cases she dealt with at the appellate level.

But Trump put Barrett into a difficult position heading into her confirmation hearings, set to begin on Oct. 12, by saying he wants a full bench of nine justices on the court because he thinks they’ll decide the outcome of the election.

“I think this will end up in the Supreme Court. And I think it’s very important that we have nine justices,” Trump told reporters on Wednesday.

Three days later, he announced Barrett as his nominee to fill the vacancy left by the death of liberal Supreme Court Justice . Barrett is a favorite of social conservatives, and if she is confirmed, she is expected to establish a 6-3 conservative majority on the court.

The president and his allies have sought to portray Barrett as an impartial jurist who would make decisions based on the law and not political considerations. And Supreme Court nominees regularly decline to answer in confirmation hearings when asked how they would rule on specific, hypothetical cases -- most commonly, cases challenging the 1973 Roe v. Wade decision that established a right to abortion.

But Trump’s suggestion the high court could decide the election may force Barrett to answer whether she would participate in such a case. That answer, in turn, may be interpreted by some senators and ordinary Americans as a signal about her political independence from the president.

The White House said it would be inappropriate for Senate Democrats to ask Barrett the question during hearings.

“Asking the nominee to pre-judge or promise a decision on a case -- including the decision to take the case at all -- violates the bedrock constitutional principle of judicial independence,” said White House spokesman .

There is no indication Barrett plans to recuse herself from election-related cases.

U.S. law requires judges to refrain from participating in cases in which they have a conflict of interest or might be biased. But Supreme Court justices rarely recuse themselves, except when where there is a direct financial conflict or they were involved in a case at the lower-court level. They otherwise have broad discretion to decide whether to recuse.

Ginsburg didn’t step aside from Trump-related cases after calling him a “faker” during his first run for president. Trump at the time Ginsburg to resign. She later apologized.

The president earlier this year said Ginsburg and Supreme Court Justice should recuse themselves from cases involving his administration after Sotomayor criticized the court’s conservative majority for granting the government’s requests for emergency stays.

“I just don’t know how they cannot recuse themselves for anything having to do with Trump or Trump-related,” the president said during a Feb. 25 news conference in India.

“She’s trying to shame people with perhaps a different view into voting her way,” he said of Sotomayor. “And that’s so inappropriate.”

The Supreme Court has decided the outcome of a presidential election only once. In 2000, five Republican-appointed justices ended recounts of disputed ballots in Florida with Republican certified as the winner in the state, effectively handing him the White House.

Even possible personal conflicts for justices have not always resulted in recusal in the past.

The late Justice didn’t step aside from a 2004 case involving then-Vice President even though they had recently gone duck hunting together.

But in another example, Sotomayor recused herself from a Colorado case challenging a state law over how presidential electors must vote due to her friendship with one of the respondents, a Democratic state legislator.

And after being confirmed to the high court, Justice didn’t participate in cases in which she had worked in her previous job as President ’s solicitor general.