A coin representing Bitcoin cryptocurrency sits on a computer circuit board in this arranged photograph in London, U.K., on Tuesday, Feb. 6, 2018.
Chris Ratcliffe/Bloomberg via Getty Images

Major law firms that decided several years ago to advise clients on cryptocurrency matters aren’t backing down, despite the recent plummet in value of digital currencies like Bitcoin.

Practice leaders concede that the popped crypto bubble has resulted in a tough time for a segment of their clients, especially startups, as fewer new crypto businesses are forming than in recent years, and consequently the “new deal flow” is slowing.

Yet these attorneys report such practice groups are still thriving despite the changed market. This is due to increased regulatory inquiries and investigations, more litigation, and a growing need to help procure new financing or bankruptcy protection for some clients.

Most lawyers in the field remain optimistic about the future of Bitcoin and other cryptocurrencies, despite warnings from regulators about their misuse, and bearish market predictions from some investors. They’re uniformly excited about what’s next for related blockchain technology.

Law firms first began standing up their own practice groups in the field in 2010. That was a year after Bitcoin, the first popular cryptocurrency, was released.

Simultaneously, practice groups began handling work involving blockchain—a technology that allows digital information to be distributed but not copied through the use of cryptography.

Though blockchain was originally designed to serve as a ledger for Bitcoin transactions, other organizations have begun to use it to promote efficiencies. One common use of blockchain is for “smart contracts,” which leverage code to execute transactions automatically.

Most law firms that work in this area have combined practices that handle both crypto and blockchain-related clients.

Perkins Coie and Cooley were among the first major law firms to handle cryptocurrency and blockchain work. In the past several years, other top firms also have made major commitments to the field, including Baker McKenzie.

Perkins Coie’s practice group may be the largest, with 20 attorneys working full-time on blockchain and crypto, and another 35 lawyers part-time, said J. Dax Hansen, a Seattle-based partner with the firm and chair of its blockchain technology and digital currency industry group.

Hansen said about half of his group’s work involves unsettled federal and state regulations. Another 25 percent includes financing and corporate work, often involving startups, and the remainder involves enforcement issues, he said.

The Securities and Exchange Commission and the Commodity Futures Trading Commission have taken the enforcement lead, and the SEC has at times charged crypto companies with unregistered distribution of securities. But that’s just the beginning, crypto lawyers say, as the IRS and Justice Department are also are keeping tabs on companies.

Issues surrounding cryptocurrencies recently have come into sharp focus, as Bitcoin peaked in December 2017 at a value of roughly $19,500. As of Jan. 28, that price had dropped to around $3,420 as U.S. markets closed. 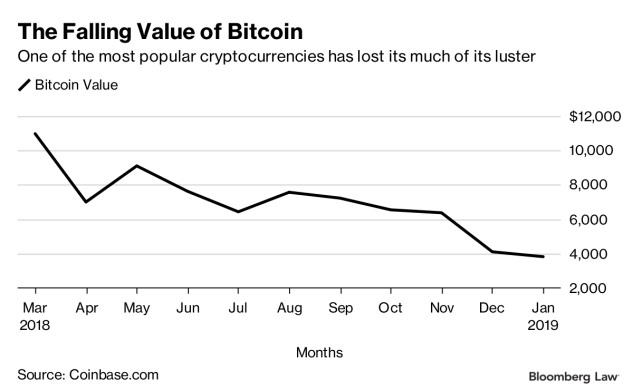 In the bubble’s wake, firms continue to hold starkly different attitudes about the wisdom of investing too many resources into cryptocurrency-related work, said Matt Kluchenek, a banking and finance partner with Mayer Brown in Chicago.

Mindsets have ranged from the “incredibly suspicious” on the one hand, to other firms that quickly developed drives to “head out West and stake our claim,” said Kluchenek, who until recently worked on blockchain and crypto issues at Baker McKenzie.

Kluchenek said that financial technology, or “fintech” work has picked up over the past year—including blockchain work—in part because of its fast-evolving list of applications.

Going forward, he said clients are likely to appreciate law firms that have been in the space from the beginning.

Despite the bullish attitudes of many, there may be causes for concern for firms that put a particular focus on cryptocurrency.

“I do believe it will go to zero. I think it’s a great technology but I don’t believe it’s a currency. It’s not based on anything,” he said during a Jan. 23 panel discussion at the World Economic Forum in Davos, Switzerland.

This isn’t to mention the address by SEC Chair Jay Clayton one year ago. He put lawyers on notice regarding their work for crypto startups promoting “initial coin offerings,” fundraising tools that offer digital currency directly to the public.

As “gatekeepers,” lawyers representing these companies need to make sure they’re not illegally helping to introduce products that are effectively “securities” but are not promoted as such, he said in the speech before the Securities Regulation Institute.

“To be blunt, from what I have seen recently, particularly in the initial coin offering (‘ICO’) space, they can do better,” Clayton said.

Some firms, like BakerHostetler, have made a conscious decision to try to minimize risk by focusing more on the blockchain side of their practices than the crypto side—and by avoiding ICOs altogether.

The crypto bubble, said Laura Jehl, a partner in BakerHostetler’s privacy and data practice, may have been helpful for a few reasons, including weeding out some of the bad actors among the startups.

“It’s led to a maturation of the market,” said Jehl, in part by leaving companies more likely to grow as new tech develops.