Crowell & Moring is moving into Chicago with the acquisition of Brinks Gilson & Lione.
Tim Boyle/Bloomberg

Crowell & Moring, a Washington-founded law firm that has been looking to grow, is acquiring Chicago intellectual property firm Brinks Gilson & Lione to enter the Midwest for the first time.

Crowell is picking up more than 60 attorneys spread across offices in five cities, the firm’s largest acquisition in its 42-year history, it said Thursday. The firm, which reported more than $514 million in gross revenue to The American Lawyer last year, will immediately launch offices in Chicago and Indianapolis.

The deal marks the latest chapter in an ambitious growth plan for Crowell, which is best known for litigation, regulatory, and federal contracts work. The firm acquired Wall Street boutique Kibbe & Orbe in March, a four-lawyer group from legal services company Atrium in San Francisco last April and had added nearly 90 lateral partners over the last three years before snagging Brinks.

Phil Inglima, Crowell’s chairman, told Bloomberg Law on Thursday that while Crowell has been “very happy” with its success in its U.S. offices on the two coasts, it has long wanted to expand to the middle of the country as well. In an extensive February interview, Inglima said that the firm was actively shopping for acquisition targets, noting that Crowell wanted to grow “strength on strength” in its core practices and deepen its technology and transactions bench.

The combination with Brinks, which gives Crowell more than 625 lawyers globally, began at the suggestion of a mutual client of the firms, Inglima said, declining to name the client.

“That kind of an endorsement up front was extremely powerful for us,” he said. Serious conversations between the two firms began in the early part of 2020 but were put on the back burner due to the coronavirus pandemic. They got back to the deal table in earnest in by the close of 2020, he said.

Brinks is one of the largest intellectual property firms in the U.S. The firm has worked with clients across a wide array of industries, including medical devices, industrial manufacturing, electronics, software, pharmaceuticals. It has also worked with clients to develop and protect cutting-edge innovations in the areas of AI, blockchain, autonomous vehicles and wireless/5G.

Brinks has been an independent boutique for over 100 years, specializing in IP and has been successful in that regard, said Brinks president Gustavo Siller. He will now co-chair Crowell’s technology and intellectual property department alongside Cheryl Falvey, one of the main architects of Crowell’s digitial transformation and technology practice.

“But the industry is changing, Siller said. “Clients are demanding practices in other areas that we just didn’t have, so exploring opportunities with a bigger platform started to become of interest to us.” 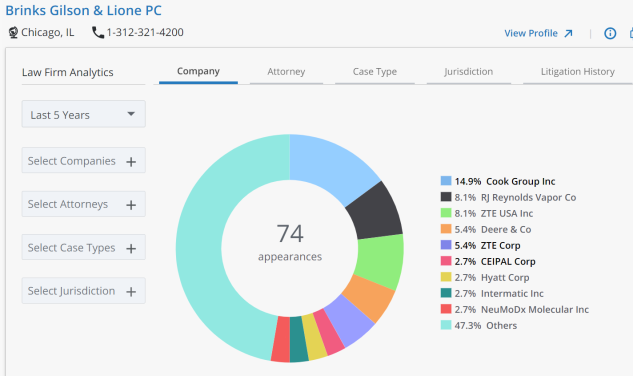 Brinks had a cultural alignment with Crowell and its growth strategies were akin to those that Brinks wanted to develop—not only in expanding its IP practice, but growing in IP-adjacent practices like cybersecurity, privacy and data, and advertising and media.

“Together, we’re going to be one of the largest IP groups in the country,” Siller said, “certainly will be an IP powerhouse, and I think it’s going to be a technology powerhouse.”

Crowell has a “high commitment” to growing its technology practices, Inglima said. By adding more than 60 lawyers with advanced degrees in the sciences, engineering and other areas, it will compliment the firm’s transactional and litigation work, he said.

Crowell has strengths in areas like life sciences, health care, pharmaceuticals and others akin to Brinks, Inglima said. It has a vibrant emerging companies and venture capital practice recently boosted by the Atrium additions in California, with clients not only looking to launch, but also trying to protect products, he said.

“These are familiar terrain to both firms, but Brinks takes us to a much higher level and puts us in a very high competitive position within the U.S. market for patent trademark and related regulatory expertise,” Inglima said.

Crowell’s Chicago expansion plans aren’t stopping at its merger with Brinks. “Our growth plans in Chicago are significant,” Inglima said.

The firm will be immediately focused on adding to its transactional capacity, with the Windy City as a focus. It will also continue growing its regulatory practices, like health care, white collar and environmental, as well as its litigation group.

“You’re going to see a number of aspects of our growth ambition reflected in addition to the Chicago office over the months and next few years ahead,” Inglima said.

Through its merger with Brinks, Crowell becomes the latest Big Law firm to open up an office in Chicago in recent months.

Cooley, looking to capitalize on the Midwest’s venture capital scene, officially launched its anticipated Chicago office in May with 10 partners, including Rick Ginsberg from Winston & Strawn, Greg Grossman from DLA Piper and Laurie Bauer from Latham & Watkins.

Last year, New York-based Willkie Farr & Gallagher opened its office in Chicago, nabbing Jenner & Block chairman Craig Martin along with five other partners from the firm. In December, Venable added a 12-lawyer group from Schiff Hardin to launch its own office in the Windy City.

(Updated with comments from Inglima and Siller throughout)