Welcome back to the Big Law Business column on the changing legal marketplace written by me, Roy Strom. Today, we look at a spike in associate attrition at Cravath. Sign up to receive this column in your inbox on Thursday mornings.

Last week, I asked this question: Amid grueling workloads for associates, are firms that offer a better “quality of life” experiencing less attrition? The answer was: No.

Underneath that top-line data, one prestigious firm bucked the trend: Cravath, Swaine & Moore.

The Wall Street firm placed No. 1 in the Vault prestige rankings this year (and last). But that hasn’t made it immune to associate attrition. In fact, associate departures at Cravath are on pace this year to rise to their highest levels since at least 2017, according to data from Decipher, which provides due diligence for Big Law hires, and Firm Prospects, which tracks law firm rosters.

Cravath had seen 68 associates depart this year through Monday, the data show. That’s two more than had left on average during the full years from 2017 to 2020. The firm is on pace for 116 departures this year. 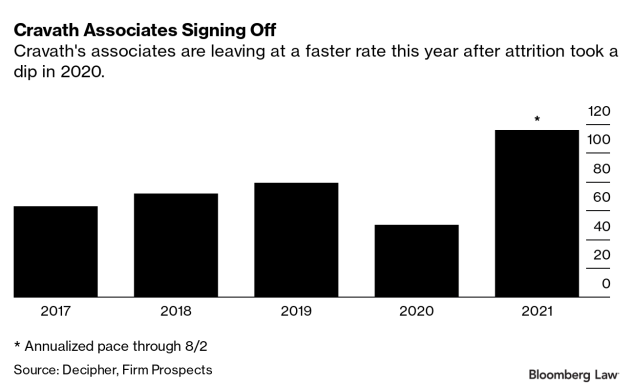 As I wrote last week, attrition is a natural part of the Big Law business model. Firms expect it. They manage it. In many instances, they make it happen. But if more associates leave than a firm is expecting, it can punch holes in the teams required to meet client demands. Firms typically fill those holes by hiring associates from rivals.

Cravath says it doesn’t do that. The firm developed and still adheres to the “Cravath system” for associate development, compensation, and promotion. Its website says it does not hire associates from rival firms, and that stance shows up in the data. It has only added four associates this year, the fewest among the group of 20 firms we looked at last week.

The firm’s stand against lateral hiring may be changing. Above The Law reported Cravath had posted a job opening for an attorney talent recruitment manager who would be in charge of a lateral recruiting program.

The job opening is no longer listed online, and Cravath did not return a message seeking comment on whether it was planning a lateral hiring program or on what has caused the spike in attrition this year.

One thing is worth pointing out about the rise in associate attrition at Cravath this year: It comes after a dip in 2020, when only 50 associates left the firm. In the two-year period from 2018 to 2019, 151 associates headed for the door. That figure is on pace to total 166 from 2020 to 2021. It’s possible some of the departures that happened in 2021 might have occurred last year under more normal circumstances.

Either way, the attrition comes at a time when many law firms are experiencing a surge of corporate work. Cravath ranked No. 4 for deal value during a record first half of the year for dealmaking, according to data compiled by Bloomberg.

So, we again reach the key question: What is driving the attrition?

There is a lot of concern over burnout, and it is understandable given the hours lawyers have been putting in over the past 18 months. I remain interested in telling the story of lawyers who’ve put Big Law behind them because the job asks too much. And I do tend to agree with McDermott Will & Emery chair Ira Coleman, who told me last week he believes there will be a longer-term change in the relationship between associates and their law firms.

But right now I see scant evidence that attrition is driven by Big Law associates walking away from a grueling industry. It seems that amid a historic surge in demand for corporate lawyers, some firms are outperforming financially and doing a better job recruiting.

Of the 68 associates who left the firm this year, 58 (85%) went to other law firms, with all but eight of them joining members of the AmLaw 200, according to Decipher. Only two were in “non-attorney” roles.

There are 16 AmLaw 100 firms who’ve recruited five or more Cravath associates since 2017, the Decipher and Firm Prospects data shows. All but one of those firms grew revenue last year at a faster clip than Cravath, which had top line growth of 3.1%. (The AmLaw 100 average was 6.6%.) 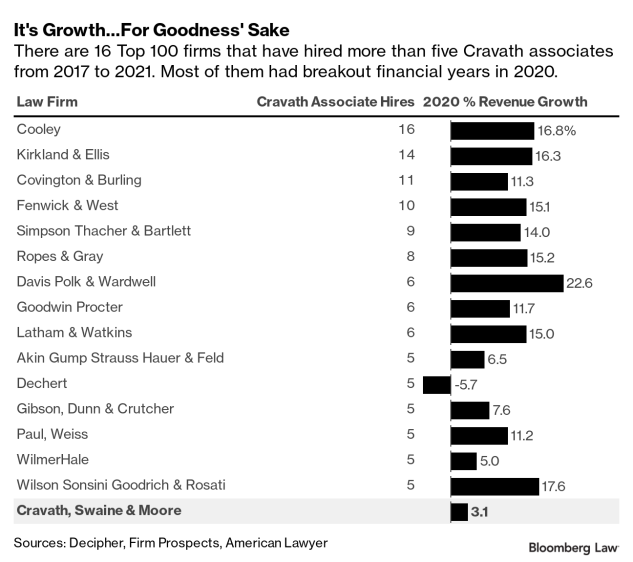 Cooley and Kirkland & Ellis have hired more Cravath associates than any other firm since 2017. It’s no coincidence that they were also among the fastest growing from 2017 to 2020. Cooley’s top line grew 45% during that span, as the firm’s prospects surged alongside those of its technology and life sciences clients. Kirkland’s revenue soared 53% as the largest firm in the country by revenue took advantage of a booming private equity business. Cravath’s revenue increased 17% during that time.

From that perspective, the story of Cravath’s associate attrition looks like a rather straightforward one: Some firms are gaining market share. They’re hiring from the firms who aren’t.

On Office Returns: Speaking of Cravath, the firm was one of a group this week to alter return to office policies due to concern over the spread of Covid-19’s Delta variant. Cravath will be delaying its reopening until October and requiring its workforce to be vaccinated to go to work in person. Other changes at firm will include the option for remote work up to six days a month, as well as a “business casual” dress code (within reason) at the office.

On the Lone Star: Big Law has been rushing to Texas, opening offices and hiring new attorneys in Austin, Houston, and Dallas. The focus on Texas has also given lawyers of color in the state opportunities to helm new offices and score firmwide leadership positions, reports Tiana Headley.