Coca-Cola Co. has said it is considering appealing a U.S. Tax Court ruling that it must pay the bulk of its tax bill.
Photographer: Luke Sharrett/Bloomberg via Getty Images

hired a former federal judge with deep connections within the judiciary and government to advise the company on its multibillion-dollar tax fight with the IRS.

The hire of J. Michael Luttig may mean the beverage giant plans a bold appeal that could reach beyond the specifics of the company’s $3.4 billion tax fight with the IRS. Luttig, who declined to comment, signaled his thoughts about the case in a Wednesday press release, saying he would expect federal courts to find that the IRS wasn’t allowed to ask for back-taxes based on a different tax calculation method from one it had previously approved.

Luttig is a well-known, “rock-rib, limited government, conservative guy,” said Benjamin Barton, a law professor at the University of Tennessee who has written about the judiciary and the legal profession. Wednesday’s comment from Luttig could signal an appeal rooted in arguments that extend beyond Coca-Cola’s situation.

Experts had already anticipated that the case could impact other multinationals involved in high-price tax fights with the IRS, including Facebook and medical device manufacturer Medtronic.

After the U.S. Tax Court’s November ruling that Coca-Cola must pay the bulk of a $3.4 billion tax bill from the IRS, the company said it was considering grounds for appeal. The next court that would review the case is the U.S. Court of Appeals for the Eleventh Circuit—seven of its 12 active judges were appointed by Republican presidents, including six Trump appointees.

A spokesman for Coca-Cola said in a statement Wednesday that Luttig “will advise the company and its board of directors on tax matters, with particular focus on the company’s ongoing litigation with the U.S. Internal Revenue Service,” and will work closely with the company’s general counsel, Bradley Gayton. 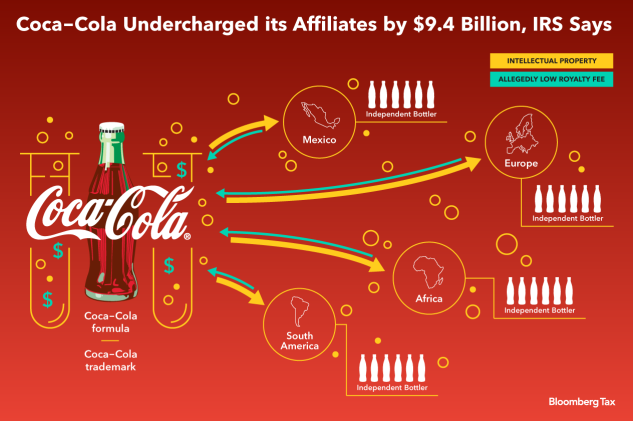 Luttig previously worked in the Justice Department under President George H.W. Bush and as assistant counsel to the President under President Ronald Reagan. As a former federal appeals court judge, he hired many law clerks who went onto prominent careers—including U.S. Senator Ted Cruz and former U.S. Solicitor Noel Francisco, who served in the Trump administration.

While on the appeals court, Luttig was known as a so-called ‘feeder judge’ since many of his clerks later clerked at the U.S. Supreme Court, and Luttig himself was a groomsman at the wedding of Supreme Court Chief Justice John Roberts.

Luttig will probably know how to frame the arguments in Coca-Cola’s case in a way that appeals to the now-conservative-leaning Eleventh Circuit, said Blaine Saito, a law professor at Northeastern University who focuses on tax issues. His background also prepares him to frame the technical tax issues in the case to a court of appeals that deals with a broad set of cases, Saito said.

Luttig isn’t a stranger to handling prominent legal issues for major companies. The former U.S. Court of Appeals for the Fourth Circuit judge also worked for many years as general counsel to Boeing and advised the planemaker on the Boeing 737 Max crash fallout.

Carl Tobias, a University of Richmond law professor who focuses on the federal judiciary, said it makes “all the sense in the world” for Coca-Cola to hire Luttig if what they’re looking for is not just a good lawyer, but somebody who is well-connected in judicial circles, Congress, and inside and outside of Washington, D.C.

—With assistance from Ruiqi Chen.

To contact the reporter on this story: in Washington at abagchi@bloombergtax.com