The Manhattan Bridge and skyline of Lower Manhattan on April 20, 2020 in New York City.
Photographer: Johannes Eisele/AFP via Getty Images

Several of the country’s biggest law firms are awarding their associates tens of thousands of dollars in “pandemic bonuses” to show appreciation for hard work during a stressful time, but some corporate clients are worried that they will ultimately pick up the tab.

Around a dozen Big Law firms have announced special fall bonuses since September. Many range from $7,500 to $40,000 based on a seniority-dependent scale first used by Davis Polk & Wardwell. Many firms have said they will also pay out their traditional annual bonuses that topped out at over $100,000 last year.

“I understand that law firms need to retain their top talent. That is certainly a benefit to clients as well. The question becomes—and this is always the tension with law firms and their clients—how much, if any, of the bonuses do they try to pass along to clients in the form of increased rates?” said Chaka Patterson, the general counsel of Chicago-based Adtalem Global Education.

These special bonuses signal that Big Law has fared better than expected in the pandemic, and the wealthiest firms have largely avoided Covid-19 related austerity measures. But multiple general counsel said that they might reconsider their law firm relationships if these rewards for firm success translate into significant rate increases.

Salt in the Wound

Most of the firms that gave fall bonuses—and even some of those that did not—appear to have outperformed much of the economy in 2020, implementing few, if any, internal pay and job cuts.

The large firms that have announced fall bonuses declined to comment for this story.

Others, like Paul Weiss Rifkind Wharton & Garrison, Cravath, Swaine & Moore, and Kirkland & Ellis, have said they will not be giving out fall bonuses.

“Providing a special cash reward in direct response to the pandemic does not feel right at this time,” wrote Paul Weiss chair Brad Karp in an email to associates and counsel last month. Karp cited clients’ struggles and problems in the wider economy for the firm’s decision.

Some firms that declined to give out cash this round noted they will take other firms’ fall bonuses into account when revisiting their own year-end bonuses, a move that seems to leave the door open for bigger payouts before the end of the year.

General counsel are not strangers to rate increases, but Patterson said he wouldn’t be surprised if associate rates go up by “more than the historical average” to pass on the cost of fall bonuses to clients, a move that could hurt the future firm-client relationship.

“There certainly can be the perception of a little salt being added to the wound—particularly if clients are finding themselves having to cut back, furlough, or eliminate positions or take other drastic cost-saving steps—to see law firms so outwardly rewarding people with extra bonuses,” said a general counsel of a major security company, who declined to be named because he retains firms that are offering the bonuses.

“They could have tried to pass savings back to clients, and it doesn’t seem like that’s the way they’re going,” the general counsel added.

Many parts of corporate America have showed more wear and tear from the coronavirus pandemic than Big Law, with large scale layoffs and cuts. Executives at some companies, including general counsel, revealed in the spring they’d take pay cuts to help counteract the pandemic’s effects. 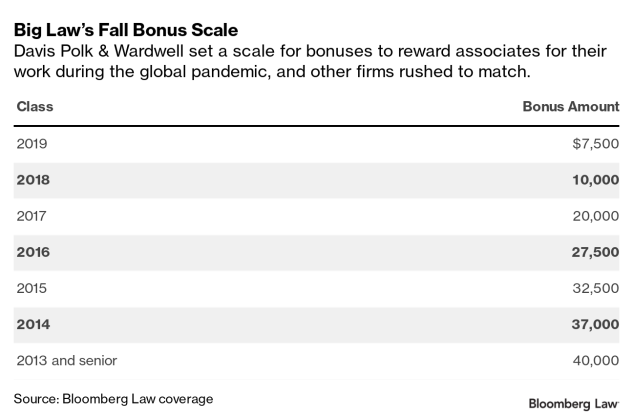 “There are, of course, a number of law firm costs—overhead bonuses, Christmas parties, et cetera—that are undoubtedly baked into the cost of legal services from those law firms,” Henry said. “I wouldn’t single this cost out as being unfair or insensitive.”

While many general counsel are wary of abnormal fee increases, most agreed that the internal business operations of their law firms are outside their purview.

“If they are not being direct billed to clients, I don’t get involved with internal compensation decisions at law firms,” said Luis Machado, vice president and general counsel of insulation and building materials company TopBuild Corp, based in Daytona Beach, Fla.

Susan Hackett, CEO of legal consultancy Legal Executive Leadership LLC, based in Bethesda, MD, said most of her in-house clients recognize that working from home has led to longer hours and greater stress for many of their outside counsel.

“I wouldn’t advise anyone to have any problem with the idea of rewarding particularly hard and meritorious work during a really crappy time,” she said. “Indeed, I think most law departments recognize that law firms are a collection of really great top talent, and if your talent’s not happy, then you’re not going to get the service that you want.”

There’s also the unique structure of firms which divides shareholders and salaried lawyers. “The optics are worse,” said Hackett, if those who own a stake in the firm choose not to share the wealth.