The bonuses mark a 15% increase from last year at the top end and follow multiple seasonable bonuses and a base salary boosts that lawyers received this year. Both firms confirmed it would match the new scale.

In addition to the annual bonuses, Boies Schiller also announced two tiers of “extraordinary” and “extra-extraordinary” bonuses for associates who billed more than 2,350 and 2,600 hours, respectively. Associates biling between 2,350 and 2,599 hours this year could earn up to $140,000, and those billing even more are eligible for an additional $150,000, according to an internal memo from the firm’s managing partners.

Cadwalader will similarly reward associates who billed more than 2,200 hours this year with additional bonuses worth 120% of an associate’s annual bonus. That means a senior associate at the firm could earn an extra $138,000.

In total, senior associates at firms like Cravath and Cleary Gottlieb could earn up to $544,000 this year, assuming they receive both spring and fall bonuses, the base salary increase, and the full annual bonus amount. Some lawyers at firms like Boies Schiler or Paul Weiss, which last month announced similar performance-based bonuses, could make even more.

“We are grateful for our excellent clients who entrust us with their most important matters and on whose behalf we have achieved major victories in 2021,” Boies Schiller’s managing partners wrote in the memo. “And we are thankful for all of you, whose commitment and hard work, even in the face of the pandemic and other uncertainties, has remained unwavering and which is the foundation of the Firm’s continued success.” 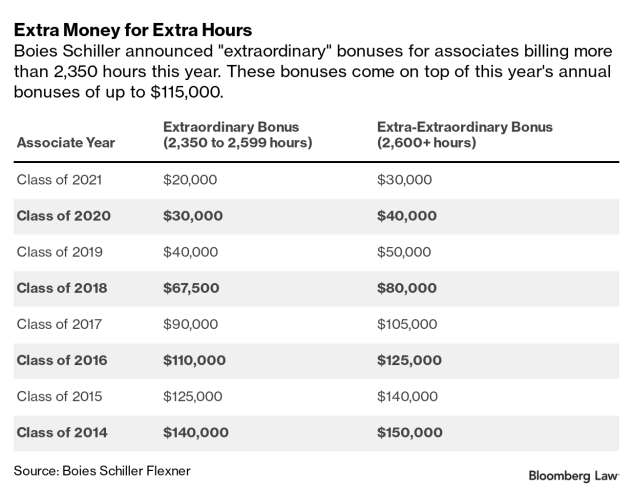 The large pay packages are a way to retain overworked associates in a hot talent market as many firms enjoy their best financial years yet. Extra payments like Boies Schiller’s could show appreciation for associates that remain with the firm despite the lure of jumping to another firm and collecting signing bonuses of up to $100,000.

Many large firms are expected to match Cravath’s bonus scale, according to recruiters.

“I anticipate most Big Law firms will match to not only reward their associates but also to retain talent in a competitive lateral market,” Summer Eberhard, a legal recruiter for Major Lindsey & Africa, told Bloomberg Law.

Other firms that are likely to announce their bonus scales soon include Davis Polk, Milbank, and Paul Weiss.

(Updated with information about Boies Schiller and Paul Weiss in paragraph four. )