A new pair of bonuses recently introduced by Big Law to reward and retain associates may not be enough to keep them in their seats in a hot job market and amid what recruiters call increasing lawyer burnout.

Willkie Farr & Gallagher and Davis Polk & Wardwell kicked off the new bonus race earlier this month, offering up to $64,000 per attorney. The payments vary based on seniority and are contingent on keeping in “good standing.”

Through March 29, more than 20 Big Law firms have matched this “special bonus” scale, including Cleary Gottlieb Steen & Hamilton, Cooley, Fenwick & West, Latham & Watkins, Paul Weiss Rifkind Wharton & Garrison, and Cravath, Swaine & Moore. Kirkland & Ellis is among a number of Big Law firms that have yet to announce a match.

The case for bonuses is simple: Big Law business is booming, particularly in the corporate space, and extra cash could help recruit and retain associates. On the other side of the equation is the lure of a hot job market and burnout from the heaviest workloads firms have faced in recent memory, along with personal pressures caused by Covid-19.

“While offering some of these bonuses is great and it demonstrates an appreciation from the firm that you’re with, whether or not in the long term it’s going to be helpful for retention I think is yet to be seen,” said Summer Eberhard, West Coast-based managing director in the associate practice group at Major Lindsey & Africa.

The Case for Bonuses

Most top law firms have a running start coming into 2021, thanks in no small part to restructuring, capital markets, and SPAC activity that drove much of the record revenue they saw last year, with workloads to match. The level of activity has continued, and in some cases increased, necessitating more lawyers to handle the deluge.

Despite the initial slowdown last spring because of the coronavirus pandemic, the lateral market for associates has picked up in 2021 and is the most vibrant Eberhard has seen in her eight years of legal recruiting.

The amount of work that is coming in, particularly on the corporate side, has grown exponentially and firms don’t have enough associates to meet the demand, she said. Hours at every firm seem to be high, she added, and at some, associates’ billing hours will end up annualizing to 3,000 if they continue at this pace.

While initially midlevel and senior associates were in demand, law firms are now looking for associates across all experience levels, using bonuses as an incentive, according to Eberhard. 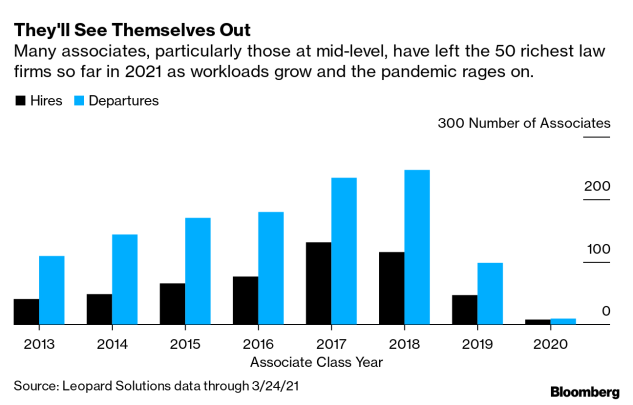 Spurred by the pandemic, Big Law firms gave out special bonuses last year of $7,500 to $40,000, in addition to conventional year-end bonus payouts, which have also grown over time.

Over the years, more and more associate compensation has been pushed into this bonus system, which at some firms come attached to rigorous billing requirements.

“I think that it’s advantageous for them because they can promote themselves as being at the market rate by paying market bonuses, but bonuses only get paid to associates that are performing,” said Joshua Holt, a former Goodwin Procter associate and founder of Biglaw Investor, which tracks pay data.

With 2021 special bonuses, in the likely scenario that law firms at least match 2020’s year-end bonus level, fourth year associates and above will now see more than 32% of their compensation tied up in bonuses. This points to a major emphasis on retention, especially since lawyers can only claim part one of their newest special bonuses if they exit their firm before the fall.

“Are you comfortable cutting half of your paycheck?” asked one former associate at an Am Law 25 firm, who declined to be named to preserve relationships at the firm. “I think the answer is most people probably wouldn’t feel very comfortable.”

‘Burn Out is Real’

Juggling a bigger workload than ever with family and personal responsibilities during a global pandemic has no doubt affected how some associates see their time in Big Law, an industry that already took a toll on lawyers’ mental health before Covid-19.

Though many kept their heads down in 2020 because of the pandemic and its economic impact, in 2021 some associates’ priorities have changed, both personally and professionally, said Stephanie Biderman, a New York-based partner in Major Lindsey & Africa’s associate practice group.

“Associate burn out is real,” she said.

Biderman said bonuses don’t solve the overwork issue nor do they function as an effective recruitment tool for associates if most peer firms fall in line with matching bonus amounts.

Other firms are often willing to cover any amount that an attorney would potentially be leaving on the table in a move, and may even offer signing bonuses, according to Eberhard.

“In the long run firms are perfectly willing to make up for it if you end up transitioning to another firm,” Eberhard said.

She said firms should explore other incentives outside of cash like Orrick Herrington & Sutcliffe’s recently announced “Unplug Time” policy which gives its attorneys and staff 40 hours of additional vacation per year. Davis Polk recently went a different route as well by offering its associates luxury gifts as a reward for their work.

Jumping to another firm might also provide some much-needed relief for associates.

“If you lateral from one Big Law firm to another at least you get a couple weeks of ramp down time, maybe take a couple weeks off and then ramp up at your new firm, and if you’re working 300 hours a month, that’s pretty enticing,” said another former associate at an Am Law 50 firm who recently left, and declined to be named to protect relationships there.

Many industry observers said in interviews that salary boosts for midlevel and senior associates would likely be more effective than bonuses in keeping them from leaving their firms. But with no sign that firms will boost salaries this year, bonuses have become to go-to option for Big Law, and perhaps a necessary one.

“If there hadn’t been large bonuses, I think people would’ve been very upset because they were aware of how well the firms were doing in terms of profitability, how much they were sacrificing working extremely long hours from home, and how difficult that made their work,” the former Am Law 50 associate said.