Top law firms have talked a big blockchain game—with potential applications ranging from tracking e-discovery documents to speeding bankruptcies. But only a few have actually adopted the technology in their own operations, beyond creating blockchain and cryptocurrency practice groups.

Concerns are growing that while U.S. law firms finally are beginning to recognize the importance of artificial intelligence-infused tools as a means to cut costs by streamlining and speeding operations, they’re failing to grasp the potential of blockchain, a newer technology. If that happens, it could spur tensions between corporate clients, which often have embraced blockchain tech much faster, and their outside counsel.

Currently, “we’re deep in the zone of disillusionment,” said David Fisher, CEO of Integra Inc., a legal industry-focused blockchain startup, and a founder of the Global Legal Blockchain Consortium. “But we think this is helpful, because it quiets things down.”

Blockchain allows digital information to be distributed but not copied through the use of cryptography in a decentralized and difficult to hack digital ledger.

By placing corporate supply chains on digital blockchains that have unchangeable audit trails, for example, each step in a food supply or pharmaceutical distribution chain can be verified and fully transparent.

In the legal space, blockchain originally was touted as a possible way to create and track “smart” contracts, which are written in computer code and automatically execute actions when certain criteria are met. Law firm innovators say the tech eventually could be used to change everything from the way e-discovery documents are tracked to the way firms handle bankruptcy cases.

One early proponent of blockchain in the legal industry, legal tech consultant and entrepreneur Amy Wan, has wavered between enthusiasm for the tech’s potential benefits for firms and skepticism that blockchain holds little practical appeal for firms, especially in comparison with corporations that use the tech to oversee more decentralized processes, such as Walmart Inc. and pharmaceuticals manufacturer Merck & Co., Inc.

Several challenges have slowed firms from making use of blockchain, in part because of its technical complexity, experts say. At some firms there may not be anyone on staff who understands exactly how the tech can, and should, be utilized.

At the same time, blockchain relies on multiple parties gaining access to the same system for it to have any real value. This can be a tough sell for law firms, which are institutionally predisposed to maintain close confidences.

“As users of the tech, there hasn’t been that much activity from law firms,” said Joe Dewey, a partner with Holland & Knight in Miami, and co-author of a book about blockchain use among legal and business professionals. “It’s understandable, because users rely on a network.”

Plus, from a practical standpoint, law firms sit at the end of the supply chain—as opposed to corporations that can keep better track of supply chain transactions, from purchases to shipments to payments, said Casey Kuhlman, CEO of Monax, a blockchain startup that markets services to businesses, but not law firms for now.

The tech is helpful for corporations with supply chain issues, Kuhlman said, by simply “helping companies unpack where they are in the contracting process.”

Kuhlman said he could envision law firms becoming involved with blockchains with matters that stretch over a life cycle, and when they bill through a flat fee arrangement instead of an hourly rate. Financial transactions and bankruptcy cases might fit that bill, he said. 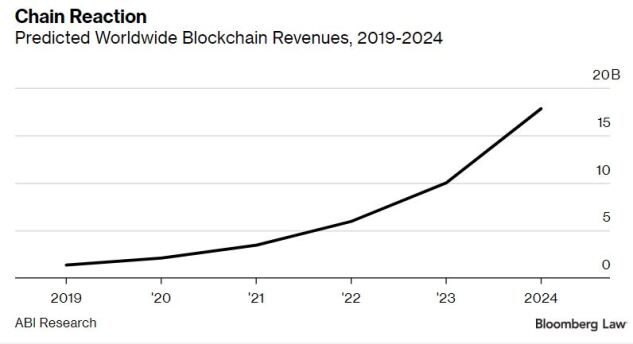 Despite the challenges of implementation, law firms have had some successes using blockchain in recent years.

The firm’s “IncuBaker” tech innovation team has worked to be at the forefront of blockchain adoption, said Diana Stern, BakerHostetler’s legal innovation designer.

That includes experiments the firm has conducted by creating an employee “recognition and rewards program” on Ethereum, a blockchain-based platform that utilizes smart-contract technology. “It plays on the incentives inherent in the Ethereum protocol to create a high-level, token-based ‘microeconomy,’” Stern said.

Stern said the project would not involve compensating attorneys or staff in cryptocurrency. “Rather, it’s an ongoing experiment to provide recognition, incentivization, and tracking for pro bono matters, business development, technology-driven initiatives, and other valuable work,” she said.

BakerHostetler is one of many major firms, including Cooley and Perkins Coie, which have capitalized on the burgeoning sector by building robust blockchain and cryptocurrency practice groups. The existence of these groups doesn’t mean that law firms are adopting blockchain and crypto for their own internal work, however.

The connection to cryptocurrencies may even have hindered blockchain’s acceptance within Big Law. Some crypto outfits have been charged with unregistered distribution of securities and other forms of fraud, for example.

“One barrier to adoption by law firms could be the view that blockchain technology equates purely to cryptocurrency on a public blockchain,” said Stern. “While that is where many of the ‘hottest’ legal issues lie, it is only one piece of the puzzle.”

Law firms and corporate legal departments won’t be able to take full advantage of the technology until a “minimal viable ecosystem” is created, said Fisher, so that they can develop a level of trust with the tech.

The Global Legal Blockchain Consortium can help to provide that ecosystem, he said. The nonprofit’s 250-plus members include Fortune 100 companies such as IBM and Walmart, and AmLaw 100 law firms like Dentons, Reed Smith, White & Case, and Baker McKenzie.

The consortium is helping to create a sense of trust in the technology, or a type of social consensus, said Fisher. It’s aiming to guide the formation of one or more legal industry blockchains, in part by setting standards and best practices. Those blockchains could then be used to create applications for types of contract and document automation, for example, or e-signatures, or new means of file encryption, he said.