The number of new “blank check” companies using a U.S. exchange to fund mergers this year is likely to break a 10-year record, according to Bloomberg data.

Initial public offerings of “special purpose acquisition companies” (SPACs) priced during the first three quarters of 2018 tied the offerings priced in all of 2017. It’s one sign that investors have more confidence in corporate dealmakers to find and close transactions.

SPACs are shell companies with no operations that are traded on a public exchange with the intention of using the money raised on the exchange to acquire another company. 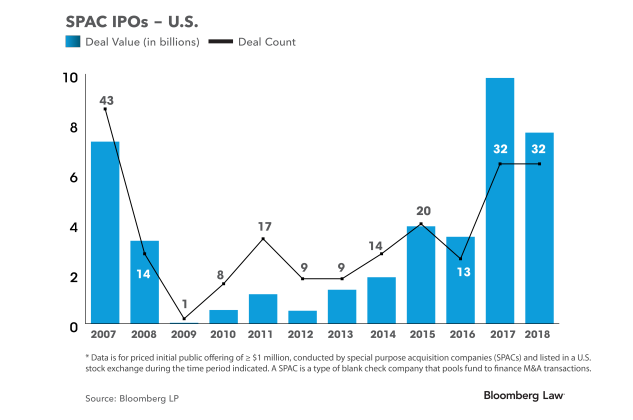 The 32 SPACs that set prices for IPOs this year are valued at a collective $7.65 billion, outpacing the value of SPAC offerings priced during the same period in 2017 by about $190 million.

That’s partly because market liquidity, or the ability to buy and sell shares without big price changes, has held strong and allowed investors to easily move money into SPACs, Haddad told Bloomberg Law. It’s also a product of more SPAC-involved deals getting done in their allotted time periods, he added.

SPACs are structured so that most, if not all, funds raised during IPOs are held in trust until business combinations are closed. Management teams often have two years to complete these deals, although deadlines can vary. If a transaction isn’t finalized and the life of the SPAC isn’t extended, the company is liquidated and the money in the trust accounts is funneled back to investors.

Private equity firms have been big players in the SPAC market and have used it to bring privately held companies onto U.S. exchanges. Priced SPACs hit their peak in 2007, but fell to near-record lows in the wake of the following year’s financial meltdown.

Since then, SPACs have regained their pre-crisis popularity and are raising more money than ever. They’re also playing a part in the uptick of IPOs seen this year. IPOs are on track to surpass last year’s total value, the Bloomberg data shows.

The dollar value of IPOs priced in the past nine months ($53.1 billion) has already surpassed the collective value of last year’s priced offerings ($52.2 billion). 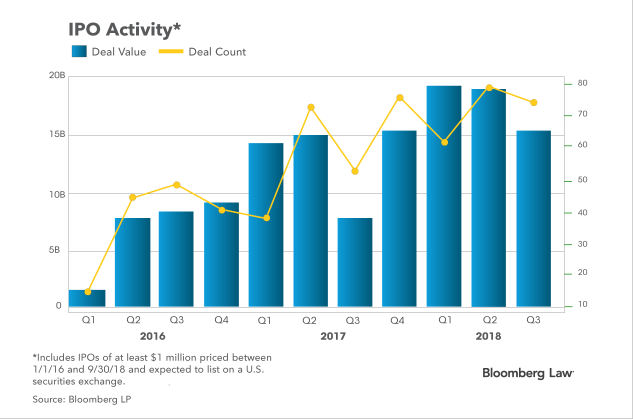 July, August, and September brought a slight drop in both the number and value of priced offerings from the second quarter. But the third-quarter totals far exceeded those of the same period last year, according to Bloomberg data.

Priced SPACs accounted for more than 15 percent of the 209 IPOs priced so far this year. They also made up about 14 percent of total IPO value.