The share of so-called blank check companies listing on U.S. exchanges is nearing levels not seen since the 2008 financial crisis, and they’re drawing attention from investors and regulators.

These special purpose acquisition companies (SPACs), which exist only to combine with other businesses, are a popular backdoor into public markets for privately held companies looking to bypass IPOs. They have accounted for almost a quarter of all initial public offerings this year, Bloomberg data show, up from 5 percent in 2014, and near the high of 28.5 percent seen in 2008.

With increased visibility has come new legal action in a space that typically hasn’t seen many lawsuits.

At least two lawsuits have been filed directly against SPACs in the past eight months—one by a SPAC shareholder and the other by a business allegedly passed over as a merger target. Two more have targeted either the privately held company, or its owners, which intended to combine with a SPAC, according to court documents.

The Securities and Exchange Commission has also showed skepticism toward stock exchange efforts to make it easier for SPACs to stay publicly traded during their search for a merger target. Last month, the SEC denied the New York Stock Exchange’s attempt to ease some pre-business combination listing requirements for SPACs, and in 2017 the commission raised questions about a similar proposal from the Nasdaq Stock Market.

“We’re at an inflection point where the rise in SPACs is leading to more attention,” said Andrew Pendergast, vice president in the private equity and mergers and acquisitions practice of insurance broker Marsh LLC. He said some of his SPAC clients are talking about raising the limits for their director and officer liability insurance to deal with potential legal or regulatory risks.

Insurance brokers tell Bloomberg Law that companies’ costs for director and officer liability coverage are likely to increase across the board as insurance capacity starts to contract amid a strong IPO market.

“We’ve seen that bleed over into pricing for all classes of D&O insurance whether they’re IPO-related or not,” said Chris Rafferty, Chief Operating Office at Aon’s Financial Services Group. “So I think it stands to reason that at some point, SPACs will start to feel that as well.”

The companies are typically formed by private equity sponsors, and must undertake a business combination within a pre-determined time frame—often two years. Their corporate governance is similar to that of a regular public company, according to repeat SPAC sponsor James Graf.

“It’s different in that we’ve got no operations,” said Graf, who’s closed four business combinations since 2011. The former investment banker is now chief executive officer of Graf Industrial Corp., the first SPAC in his name.

“But we still have all the regular board committees, meetings, and oversight that any public company would have,” Graf said. SPAC boards are becoming more engaged than they were in the past as the structure appeals to more investors, he added.

SPACs raise capital for their transaction through IPOs, but they will liquidate and return funds to IPO investors if no merger or acquisition takes place. They’re also viewed as a lower-risk, shorter-term investment by some, as investors have the option to cash out when the business combination takes place.

SPACs’ average deal size has increased to more than $220 million this year, from about $126 million five years ago. 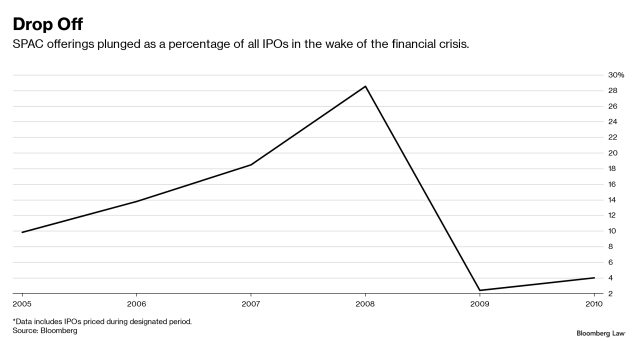 SPACs grew quickly in the years leading up to the market downturn in 2008.

The companies they targeted then tended to be smaller, and there was inconsistency in the sophistication of SPAC sponsors, said Joel Rubinstein, chair of Winston & Strawn LLP’s capital markets practice, who has represented companies in more than 25 SPAC IPOs.

“There just wasn’t a long track record of closing deals” with SPACs at that point, Rubinstein said. “There wasn’t enough experience then.”

Now there’s a deeper pool of seasoned SPAC sponsors and management teams than ever before, lawyers and industry watchers say. Top private equity firms are acting as both sponsors and sellers to SPACs, despite once shying away from the investment vehicle.

“There’s no longer a stigma on SPACs — everyone has made money now; the sponsors, investors and targets,” Ellenoff said. “Momentum continues to build.”