Firms that reaped the benefits of $5 trillion in global activity last year are witnessing the combination of a lower stock prices, tighter credit markets and fears of worst-case scenarios that push companies into a wait-and-see mode on mergers, acquisitions and listings.

“Russia’s invasion has put downward pressure on stock markets and has markedly increased uncertainty,” said Steven Kaplan, a professor at the University of Chicago’s Booth School of Business. “One should expect fewer deals everywhere, but particularly Europe.”

The uncertainty affects roughly $300 billion in mergers, acquisitions and listings in Europe from companies including Walgreens Boots Alliance Inc., Novartis AG and National Grid Plc, Bloomberg News reported March 3. The transaction boom showed signs of fatigue even before the invasion of Ukraine, with European deal values down 22% year-over-year through March 2, according to Bloomberg data.

Credit markets tend to pull back when there is global uncertainty, said David Klein, mergers and acquisitions and private equity partner for Kirkland & Ellis.

“Deals are still getting done, but lenders are being more cautious,” Klein said in a statement. “It’s impossible to predict how long this will last.”

The uncertainty surrounding the war showed no sign of ebbing Tuesday. Russian President Vladimir Putin said Ukraine’s leadership wasn’t being “serious” about ending the conflict though talks with Ukraine were set to continue. President Joe Biden will travel to Europe to meet with NATO allies March 24, and the United Nations said 3 million people have fled Ukraine.

When stock markets are down, interest rates are on the rise and overall uncertainty is high, deals tend to decline, Kaplan said. Companies put plans on hold as parties assess how risky the transactions are to pursue.

Law firm partners make the same sorts of calculations and even ponder the risk of worst-case scenarios, such as an escalation that would involve nuclear weapons, said law firm consultant Peter Zeughauser.

“Have Big Law deal lawyers talked about these things? Yes,” Zeughauser said. “I sense there is a yellow flag waving.” 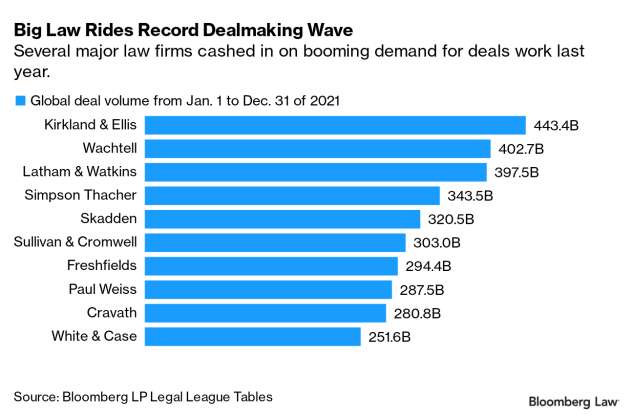 High-value transactions in Europe that could be affected include Walgreens Boots Alliance Inc.’s sale of its international Boots drugstore unit, and Novartis AG’s potential disposal of its Sandoz generics arm.

Attorneys representing buyers in M&A deals are working to determine whether clients should put their deals on hold because of sellers’ potential exposure to Ukraine or Russia, said Krishna Veeraraghavan, a partner with Paul, Weiss, Rifkind, Wharton & Garrison’s M&A practice.

“Buyers may want to wait,” he said.

The war’s impact on things such as oil, refugees, and supply chain paralysis tends to range globally rather than regionally, said Bruce MacEwen, president of the law firm consultancy Adam Smith Esq. in a written statement.

“The only sane, professional, responsible advice at this point would be along the lines of, ‘Let’s take a pause and see what happens,’” MacEwen said.

By several metrics, 2021 was a record year for corporate deal making.

Global M&A activity of $5 trillion was up from $3.5 trillion in 2020, Bloomberg’s M&A advisory league tables showed.

The number of deals that reached completion last year also marked a new high, at just over 30,000, valued at $3 trillion, according to Bloomberg data. That deal completion count beat out each of the prior 20 years on record.

Still, while the M&A market challenges this year include the war, stock market volatility, inflation and interest rate hikes, there’s reason for some optimism, according to Eric Shube, head of Allen & Overy’s U.S. M&A practice.

“M&A will remain an important tool for achieving growth,” he said in a statement. “We expect that ultimately, as in the past, the deal market will adjust to the prevailing macro conditions.”

Kirkland’s Klein said, “I’m not seeing buyers walking away from deals outside of Russia/Ukraine due to the war. I expect 2022 will be a strong year for M&A, notwithstanding the current market volatility.”