Welcome back to the Big Law Business column on the changing legal marketplace written by me, Roy Strom. Today, we look at what’s driving the shortage of Big Law lawyers: Not enough “good genes,” or Big Law’s own hiring tactics. Sign up to receive this column in your inbox on Thursday mornings.

It’s never paid more to be a Big Law associate—Cravath Swaine & Moore just made sure of that by announcing yet another pay bump for mid-level and senior associates. Yet, firms still can’t seem to get enough associates in the door.

I’ve been asking law firm leaders lately whether they think there are actually too few people who can do the job of a Big Law associate, or whether the current talent shortage is an artificial result of maximizing profits.

“No, it’s not artificial,” one AmLaw 50 firm chair told me. “Our microchips are great legal talent. And the truth is there are only so many people who fit the mold.”

To cut it in Big Law, the chair said associates need to be “smart enough,” willing to work very hard at times, and be really good with people.

“That’s a scarce resource,” the chair said. “And when you find it, you know.”

Law firms are all about “excellence,” so it’s not really a surprise they see a shortage of naturally talented superstars.

There’s no doubt firms’ collective answers to the latter question led to their current predicament.

Law firms never planned for the level of attrition they’re seeing now: as many as one-in-four associates departed their firms last year. It’s laying bare a weakness created by the hiring strategies firms pursued for most of the past decade, when they reduced the number of new lawyers brought aboard in the aftermath of the Great Recession.

Lawyers in those classes, which turned out to be too small in hindsight, are now receiving the biggest pay raises in Big Law’s ever-spiraling salary battle.

Consider: Law firms with more than 500 lawyers hired 3,980 first-year lawyers in 2013, more than 1,000 fewer than they brought in from the class of 2020, according to the National Association for Law Placement. Granted, there are probably more firms with 500 lawyers today, but it’s still a large increase.

The 2013 class has received raises and bonuses equivalent to more than 20% from the prevailing pay scale in 2019. That compares to less than 15% for their newest class of lawyers. 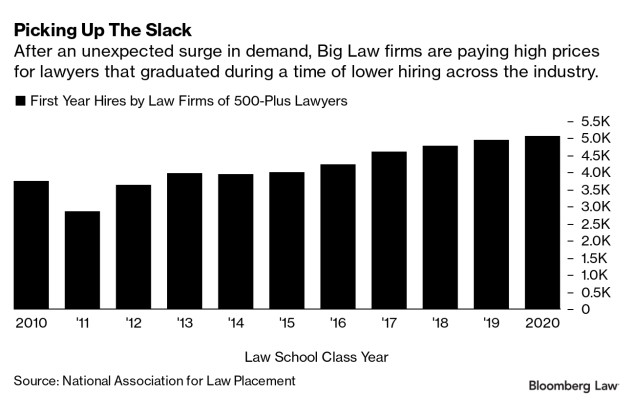 “If you think that a person who didn’t go to a top 20 law school can’t do quality legal work and you refuse to hire a person or work with a person like that, or you refuse to pay them a rate that they’re willing to work for, then you’re creating artificial scarcity,” Cemenska reportedly said.

It’s not a huge stretch to say that senior associates are Big Law’s most precious commodity these days.

A large part of the reason was something out of managing partners’ control: They got much busier than they ever expected.

The Big Law talent pipeline is largely determined years in advance, so there wasn’t much managing partners could do to conjure up the employees they needed. Some broadened their horizons, looking to new U.S. cities and abroad, reportedly hiring associates in Canada, Australia, and elsewhere.

The question is: What, if anything, should Big Law learn from this moment in time?

One possible answer: Nothing.

I think everybody is sort of hoping that the last two years will be an aberration. Associates want the deluge of work to slow down. Managing partners want their people back in the office and less stressed out. Demand could settle down, and lawyers could be working more normal hours. They could be doing it in a more normal office setting. Of course, partners in that scenario won’t continue to enjoy 20% annual profit growth.

There’s another answer, though.

Law firms could acknowledge there are more people capable of doing these jobs.

They could start hiring more lawyers from more law schools. They could spread the work around a bigger pool of associates and show they take seriously concerns about increasing diversity and decreasing burnout.

Today, law firms’ prestige is tied to the law schools from which they recruit. But firms could take more seriously their responsibility for developing lawyers—viewing them more like the professionals they are rather than DNA lotto winners.

What’s the better message: “We only hire the best law graduates.” Or: “Our training makes the best lawyers”?

Of course, all this would would be a huge hit for law firms’ productivity. Their bottom lines would pay the price.

The salary raises the industry has experienced over the last couple of years will make it harder for law firm leaders to justify hiring more associates now. But continuing to run such lean operations raises the risk of another, more-costly talent battle the next time the industry runs too hot.

Law firm leaders with long memories would do well to prepare for that now.

On Big Law and a War in Ukraine: Some law firms are cutting ties with Russian clients following sanctions. Others aren’t commenting on the matter. And Freshfields has applied to work for sanctioned bank VTB Bank PJSC in litigation stemming from the fallout of the “tuna bond” scandal in Mozambique, Bloomberg reports.

On the NFL: Former U.S. Attorney General and Paul Weiss partner Loretta Lynch defended her work for the NFL in its defense of racial bias claims lobbed by former Miami Dolphins head coach Brian Flores. Lynch told my colleague Chris Opfer the Flores suit and cultural issues in the country “raise serious concerns” and that the NFL is “committed to addressing them.”