Larger, wealthier firms are moving into the market to handle the summer’s hottest fundraising craze: special purpose acquisition companies, or SPACs. The rush into the space is threatening the long-time leader in the space, mid-size New York firm Ellenoff Grossman & Schole.

Not Shy: “We are competitive people and we don’t shy from the challenge,” said Douglas Ellenoff, whose firm in recent years routinely handled more SPAC initial public offerings than any other. “There was a period of time where no large Am Law 200 firm would have considered poaching from us.”

New Rankings: A host of large firms including Skadden, Ropes & Gray, and Davis Polk have leap-frogged Ellenoff’s firm this year as their clients have helped drive the explosive growth in SPACs. Roy Strom has the story. 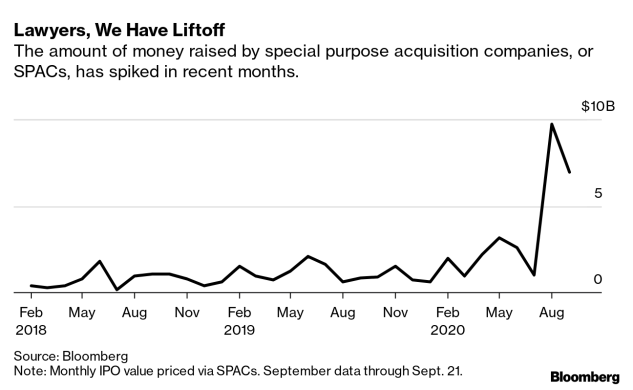 Debevoise Latest Firm to Hand Out Associate Pandemic Bonuses
Debevoise & Plimpton has matched the pandemic-related associate bonuses offered by Davis Polk & Wardwell, awarding its U.S. associates an extra $7,500 to $40,000, depending on seniority.

They’ve Got Next: Five Fresh Faces to Know in Labor & Employment
Here at Bloomberg Law, we’re looking ahead as well, specifically at the next generation of lawyers who will take the reins in various practice groups. And it’s with the future in mind that we’re excited to present a look at five young up-and-comers who are making a splash, winning big cases, conducting high-stakes investigations, and changing the landscape in various practice areas.

Roberts Will Struggle to Hold Center as Court’s Makeup Shifts
Chief Justice John Roberts’ efforts to rein in his conservative colleagues and slow walk major changes in U.S. law will be more difficult after the death of Justice Ruth Bader Ginsburg.

Trump Court Plan Quickens With a Pick Due Saturday, Path to Vote
President Donald Trump’s plan to replace the late Justice Ruth Bader Ginsburg on the U.S. Supreme Court gained momentum on Tuesday after Senate Republicans all but quashed Democrats’ hopes of stalling a nominee until Inauguration Day.

Lagoa’s Resume Recalls Conservative Regret Over O’Connor, Souter
Barbara Lagoa—mentioned as a possible replacement for Justice Ruth Bader Ginsburg on the U.S. Supreme Court—would become the first justice in three decades to arrive with experience as a state court judge. That resume is both a blessing and a curse.

Simpson Thacher Joins Firms Offering Covid Bonuses
In today’s column, Big Law stints figured early in the careers of the women said to be high on President Trump’s list of candidates to replace the late Justice Ruth Bader Ginsburg; 10 federal judges urged the Senate to wait until after the presidential inauguration to confirm a replacement for Ginsburg; a federal judge slammed a New York law firm over what he called “misleading” ads on Facebook’s biometric settlement in Illinois; a man accused of being a white supremacist is suing Twitter and its GC.

INSIGHT: Intersex Runner’s Loss at Swiss Court Does Not End Anti-Discrimination Fight
The ability of Caster Semenya, an intersex female track and field athlete from South Africa, to compete as a woman was not broadly impacted by a Swiss court’s recent ruling, leaving her fight against discrimination up to courts in the countries where international track and field meets are held, says sports attorney Ronald S. Katz, with GCA Law Partners LLP.

To contact the reporter on this story: in Washington at pchile@bloomberglaw.com