Welcome back to the Big Law Business column on the changing legal marketplace written by me, Roy Strom. Today, we look at a new threshold for lawyers’ billing rates and why it’s so difficult to put a price on high-powered attorneys. Sign up to receive this column in your inbox on Thursday mornings. Programming note: Big Law Business will be off next week.

Some of the nation’s top law firms are charging more than $2,000 an hour, setting a new pinnacle after a two-year burst in demand.

Partners at Hogan Lovells and Latham & Watkins have crossed the threshold, according to court documents in bankruptcy cases filed within the past year.

Other firms came close to the mark, billing more than $1,900, according to the documents. They include Kirkland & Ellis, Simpson Thacher & Bartlett, Boies Schiller Flexner, and Sidley Austin.

Simpson Thacher & Bartlett litigator Bryce Friedman, who helps big-name clients out of jams, especially when they’re accused of fraud, charges $1,965 every 60 minutes, according to a court document.

In need of a former acting US Solicitor General? Hogan Lovells partner Neal Katyal bills time at $2,465 an hour. Want to hire famous litigator David Boies? That’ll cost $1,950 an hour (at least). Reuters was first to report their fees.

Eye-watering rates are nothing new for Big Law firms, which typically ask clients to pay higher prices at least once a year, regardless of broader market conditions.

“Value is in the eye of the beholder,” said John O’Connor, a San Francisco-based expert on legal fees. “The perceived value of a good lawyer can reach into the multi-billions of dollars.”

Kirkland & Ellis declined to comment on its billing rates. None of the other firms responded to requests to comment. 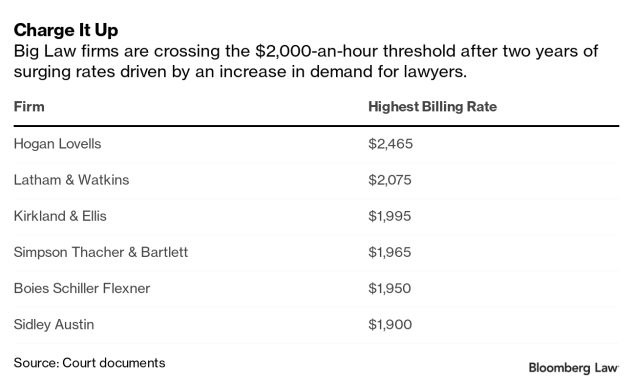 Law firms have been more successful raising rates than most other businesses over the past 15 years.

Law firm rates rose by roughly 40 percent from 2007 to 2020, or just short of 3 percent per year, Thomson Reuters Peer Monitor data show. US inflation rose by about 28% during that time.

The 100 largest law firms in the past two years achieved their largest rate increases in more than a decade, Peer Monitor says. The rates surged more than 6% in 2020 and grew another 5.6% through November of last year. Neither level had been breached since 2008.

The price hikes occurred during a once-in-a-decade surge in demand for law services, which propelled profits at firms to new levels. Fourteen law firms reported average profits per equity partner in 2021 over $5 million, according to data from The American Lawyer. That was up from six the previous year.

The highest-performing firms, where lawyers charge the highest prices, have outperformed their smaller peers. Firms with leading practices in markets such as mergers and acquisitions, capital markets, and real estate were forced to turn away work at some points during the pandemic-fueled surge.

Professional rules prohibit lawyers from charging “unconscionable” or “unreasonable” rates. But that doesn’t preclude clients from paying any price they perceive as valuable, said Jacqueline Vinaccia, a San Diego-based lawyer who testifies on lawyer fee disputes.

Lawyers’ fees are usually only contested when they will be paid by a third party.

That happened recently with Hogan Lovells’ Katyal, whose nearly $2,500 an hour fee was contested in May by a US trustee overseeing a bankruptcy case involving a Johnson & Johnson unit facing claims its talc-based powders caused cancer.

The trustee, who protects the financial interests of bankruptcy estates, argued Katyal’s fee was more than $1,000 an hour higher than rates charged by lawyers in the same case at Jones Day and Skadden Arps Slate Meagher & Flom.

A hearing on the trustee’s objection is scheduled for next week. Hogan Lovells did not respond to a request for comment on the objection.

Vinaccia said the firm’s options will be to reduce its fee, withdraw from the case, or argue the levy is reasonable, most likely based on Katyal’s extensive experience arguing appeals.

Still, the hourly rate shows just how valuable the most prestigious lawyers’ time can be—even compared to their highly compensated competitors.

“If the argument is that Jones Day and Skadden Arps are less expensive, then you’re already talking about the cream of the crop, the top-of-the-barrel law firms,” Vinaccia said. “I can’t imagine a case in which I might argue those two firms are more reasonable than the rates I’m dealing with.”

On Big Law Promotions: It’s rare that associates get promotions to partner in June, but Camille Vasquez is now a Brown Rudnick partner after she shot to fame representing Johnny Depp in his defamation trial against ex-wife Amber Heard.

On Working From Home: I spoke this week with Quinn Emanuel’s John Quinn about why he thinks law firm life is never going back to the office-first culture that was upset by the pandemic. Listen to the podcast here.