A 300mm silicon wafer at the semiconductor fabrication plant, operated by Robert Bosch GmbH in Dresden, Germany, on May 31, 2021.
Photographer: Krisztian Bocsi/Bloomberg

Congressional passage of the chips bill validates Big Law’s decision to put lobbying muscle behind the legislation that aims to make US manufacturing more competitive against China.

Covington & Burling, Arnold & Porter and Akin Gump Strauss Hauer & Feld are among firms that each collected at least six-figure payments in the first half of the year from interests promoting the bill. The firms worked for companies including Samsung Electronics Co., Qualcomm Inc. and Micron Technology Inc.

“The dam breaking was months ago,” Kevin O’Neill, legislative practice chair at Arnold & Porter, said in an interview. Work skyrocketed when “all of a sudden more players realized this had a meaningful chance of going somewhere.”

The Chips and Science Act, which devotes $52 billion to spur US semiconductor production, is a central feature of law firms’ bid to top 2021’s record lobbying revenues in a year with few major pieces of legislation winning passage. The House approved the bill Thursday, following Senate passage on July 27.

Several Big Law firms are either on pace to meet or surpass last year’s record of $1.92 billion, first and second quarter Lobbying Disclosure Act filings show. Top chip companies have been willing participants in the effort, spending nearly $20 million in the year’s first half, Bloomberg News has reported.

Qualcomm, the biggest maker of chips that run in smartphones, paid Covington nearly $3 million in the first two quarters, the largest amount sent to an outside firm to lobby for the sector, according to filings. Covington had eight people working on bills tied to semiconductors and China competition, filings show. 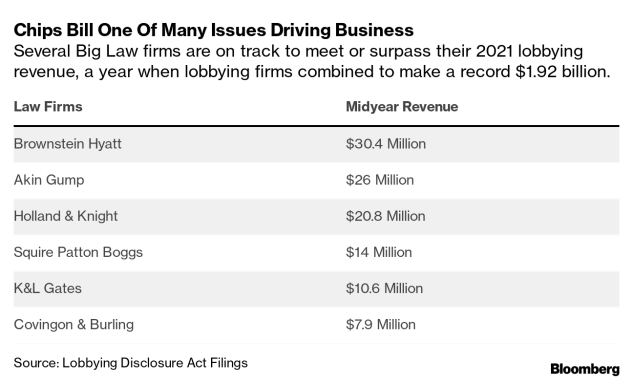 Covington deployed Michele Pearce, whose resume includes being a senior adviser to Senator Susan Collins (R-Maine) and serving as deputy general counsel for legislation at the US Department of Defense. Chip technologies are “essentially driving our national security agenda,” Pearce said in an interview.

Arnold & Porter earned $330,000 to lobby on behalf of Samsung, the leading maker of memory chips. The company has laid out possible plans to spend almost $200 billion on 11 plants in Texas, Bloomberg Newsreported July 21, citing filings in the state.

Arnold & Porter lobbyists pushing Samsung’s case included Marne Marotta, who previously worked for Senator John Barrasso (R-Wyo.) and former senators Kelly Ayotte (R-NH) and Scott Brown (R-Mass.), according to the firm’s website. Her lobbying focused on ensuring companies would at least get a “piece” of the investments the bill calls for, Marotta said in an interview.

Micron Technology Inc., the largest US maker of memory semiconductors, spent $200,000 in the first six months of the year on lobbying from Akin Gump, records show.

The law firm relied on Jeffrey McMillen, a former staff director for the House Ways and Means Committee, to lead its work on investment tax credits for semiconductors, according to public filings.

“We had another very busy quarter,” Brian Pomper, Akin Gump’s co-head of the public law and policy practice, said in a statement, adding that tax, climate, and healthcare policy issues also drove activity.

While some lawmakers such as Sen. Bernie Sanders, I-Vt., criticized the bill as a payday for chip companies, Stimers said he was eager to bat down that idea.

“In all the conversations I have had with companies that are active on the bill, the focus has been on the strategic implications for our global competitiveness and the US geopolitically—not on the companies’ balance sheets,” he said.

The chips bill passage marks one of the few legislative victories for President Joe Biden’s administration, which has hit roadblocks in efforts to implement legislation targeting areas such as corporate taxes and renewable energy.

But the prospect of transformative legislation getting approval has been enough to keep businesses across several industries investing money in Washington.

“Practically, you’ve got to be nervous because there’s talk of a recession,” said Marc Lampkin, the public policy leader at Brownstein Hyatt. “The next Congress could be equally slow to move.”

Still, Lampkin added, you “have here in Washington spending measures and the continued implementation of key pieces of legislation.”

Arnold & Porter’s O’Neill said the surprise tax, climate and healthcare deal Schumer struck this week with Senator Joe Manchin, D-WVa., is the latest indication that the pace of “extraordinary” activity in Washington isn’t slowing down.