Heading into 2020 law firm dealmakers already faced many risks and uncertainties in the market, but with the spread of coronavirus and its effects on the economy, the slowdown some had feared seems to have arrived.

In the first quarter of 2020, global M&A activity was down over 30% with $657.5 billion in aggregate deal volume over the same time period last year, the lowest for any quarter since 2014.

Since the virus began shaking up the markets around March, law firms that focus on deal work face a situation unlike any other in recent memory, and a deal market that could slow even further in the coming months.

“I think it really is a story of two halves of the quarter,” said Stephen Arcano, an M&A partner and global head of Skadden Arps Slate Meagher & Flom’s transactions practices.

In January and February, the world was “chugging along,” he said. “Then, suddenly, it was as if a switch got turned off.” 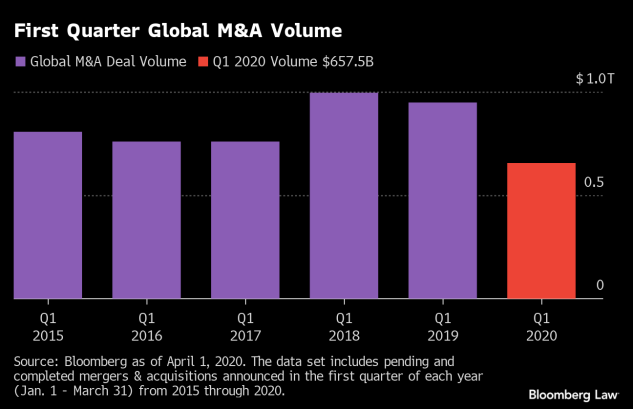 “As we began the year, the level of activity was doing pretty well across a number of different deal types and industries,” Arcano said.

Skadden, who led the first quarter league tables with $80.9 billion in deals, advised on Morgan Stanley’s all-stock acquisition of the discount brokerage E*Trade Financial Corp. valued at $14.5 billion in total. The firm also advised on the largest deal of the quarter, Aon PLC/UK’s pending purchase of Willis Towers Watson PL, worth a total of $31.4 billion.

Skadden and Freshfields also ranked No.1 and No.2, respectively, on deal volume this past quarter as principals, a metric that accounts for only the lead firm on a deal.

Freshfields corporate and M&A partner Ethan Klingsberg said that early in the first quarter, there were private equity firms selling to strategics, cash-rich acquirers buying companies, especially in the technology space, and consolidations within individual sectors. He said this activity was driven by a desire to get deals done ahead of the potential change in antitrust administration next year following the 2020 presidential election.

But that attitude appears to have changed as the coronavirus pandemic turned into a full-fledged global crisis.

“A number of deals of were pretty substantially along in negotiation. The plug was pulled over the last 30 days,[with parties] saying, ‘let’s put this on hold,’” noted Klingsberg. He said this is particularly true with respect to cash deals as there’s a huge focus on shoring up and preserving liquidity.

Most of the deals that are already signed are continuing to move forward because for most of those transactions there’s no out for the buyers, thanks to material adverse effect clauses, according to Arcano, but new activity is “substantially down.”

“It’s very hard in current climate for most acquirers to be signing deals at this point in time,” he said.

“As far as the more traditional, strategic M&A, I think right now CEOs have more on their mind than what can I do right now to make my stock price pop through an innovative acquisition,” Klingsberg said. 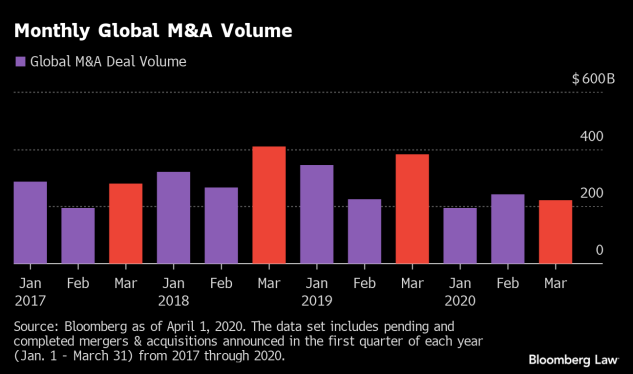 “Too Soon To Tell”

The deal slowdown in March shows the beginning of a decline, but a more dramatic drop is likely on the way, said Bloomberg Law legal analyst Grace Maral Burnett.

In the first quarter, there were 10,794 global M&A deals, with the average deal size at $60.7 million. Though the first quarter’s M&A deal count wasn’t too far off from previous years, it was the lowest for any quarter since 2017.

“The trend in M&A is likely to continue to go downward,” said Bloomberg Law legal analyst and former corporate transactions lawyer Diane Holt, and as a result there are likely to be different kinds of M&A deals.

These could be stock-for-stock consolidations, especially in sectors like energy that have been hit hard and where there’s a strong need for stabilization, Klingsberg said. Sales of distressed companies could be coming down the pipeline, as could significant minority investments in companies by nontraditional sources to help keep them afloat, he said.

“The question is how will that shape up? How will that look? Who’s going to be seizing the opportunities?” Maral Burnett said. “It’s just too soon to tell how things are going to play out. We’re just seeing the beginning of things.”

It’s not just their targets, but law firms themselves that are also reeling from the coronavirus shutdown, according to Holt.

Many law firms are cutting partner draws, laying people off, and lowering salaries as they attempt to mitigate expected budget shortfalls.

Holt said firms’ responses appear to be happening much more quickly than they did in the wake of the 2008 global financial crisis.

“It’s really potentially a more significant change among law firms and that could have an impact, not just on the law firms themselves but how they practice and how they specialize and maybe even how they conduct the practice of law,” Holt said.

“The jury is still out on that, but this seems like a change that’s going deeper and quicker than other changes.”